I haven’t been able to shake a feeling of exhaustion in who knows how long. I’ve had insomnia all my life, but I used to get up at 5 a.m. and go to the gym and then my corporate job, so I know the lack of sleep wasn’t always debilitating. I figured that, with age, my sleeplessness was getting worse or having a more profound effect on me. Then, this Biden/Harris Inauguration Day morning, I woke up after five hours of sleep feeling refreshed and energetic. I barely recognized myself. Maybe it was the Orange Monster who was dragging me down all along!

To celebrate the end of the Trump era, I headed out to Grand Army Plaza in midtown Manhattan with the Bravinlee Programs #TrumpRat team to display our ugly inflatable protest art for what may be the last time. (We reserve the right to revive him if Trump comes to town to stay at Trump Tower or, preferably, to face prosecutors.) We drew the usual crowd of amateur and professional photographers. Most people, as usual, were enthusiastic about the anti-Trump message. 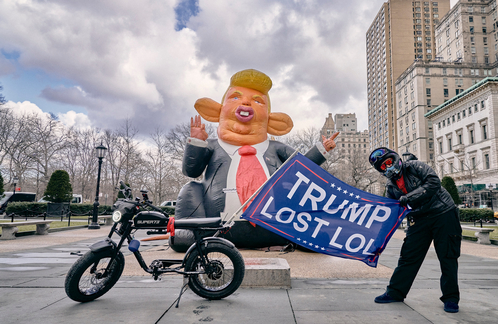 A passerby had an appropriate flag. Photo by George De Castro Day.

We did have one Russian woman stop by to rant at us about Clinton (she didn’t specify which Clinton), followed by a blonde Karen who told us we were disrespectful and tried complaining about us to a nearby cop. She got no satisfaction from him, and stalked off, probably in search of a manager to complain to. Anyway, I’d put on celebratory red lipstick — I’ve been missing it so much! — and brought my “This Pussy Grabs Back” sign from the Women’s March on D.C. in 2017 in order to strike a brief maskless pose. 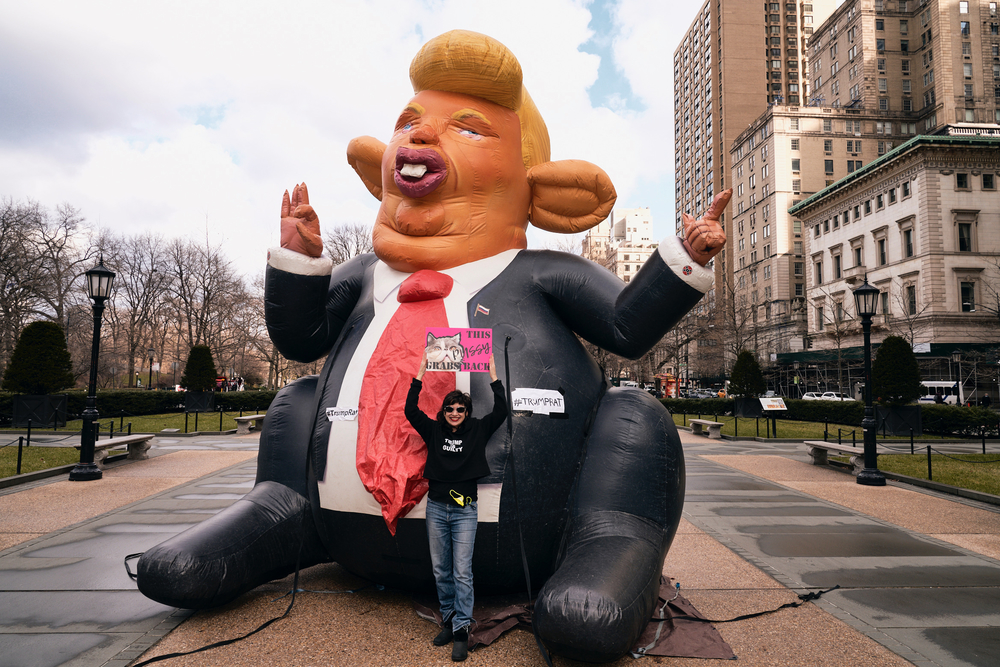 We hoped to march #TrumpRat a couple of blocks to Trump Tower, like we did on Saturday with the activists of Rise and Resist …

… but high winds made that impossible, so we deflated where we were … 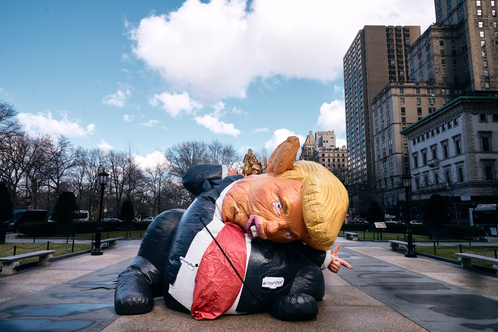 … and I simply paused in front of the tower with my Purrkoy pussy sign. 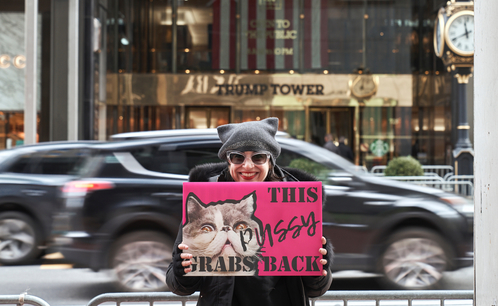 While I was posing for that photo, Team #TrumpRat was joined by a reporter from WNYC, followed by three cops who came over to tell us we couldn’t take pictures on a public sidewalk. Some testy words were exchanged about First Amendment rights, and body-cams were turned on. To prove a point, we lingered, so if you hear me talking on WNYC or NPR — well, that’s how that came about. I haven’t heard the interview myself, and I hope I didn’t talk a bunch of nonsense considering I felt a little numb for most of the day. Of course, I was hugely relieved knowing that the grifting demagogue was forced out of the White House, and no longer ruling (and lying) via tweet. But I am so used to constantly reacting — running to a protest or getting out #TrumpRat at the spur of the moment because the worst American president had spewed yet more malicious bullshit — that life has seemed disturbingly calm since Twitter finally followed its own terms of service and banned Trump. It’s that feeling of “It’s quiet … TOO QUIET!” Also, the horror of the January 6 attack on the Capitol — and the knowledge that anti-democracy neo-Nazis, Confederate flag wavers, authoritarian evangelists, and conspiracy believers are still out there — prevented a repeat of the elation so many of us felt in November when the election was first declared for Biden in November. Then there are the dire situations we still face as a country including 400,000 dead from a virus, a vaccine program in disarray, immigrants detained in cruel conditions, and racist police forces perpetrating violence against Black people all over the country. On Monday, by the way, I personally witnessed the NYPD attack protestors at the end of a march in honor of Martin Luther King Jr. Day, mere days after New York Attorney General Tish James sued the police department over its abuse of protestors. That’s how damn shameless the police can be when they’re not dealing with a few white folks like the cops I encountered today.

Activists — which should be everyone, in some way or another — still have so much to do and a lot of us might not see the results in our lifetime. That knowledge weighs on many of us. Yet, by the end of the day, I was cautiously rediscovering necessary feeling of hope. The Twitter thread that starts with this tweet captures it.

I get why people want to qualify or hedge any expression of optimism, happiness, or triumph. But no effort for justice is sustainable without joy, and celebration does not mean an end to hard work or a denial of ongoing struggle.

For a fantastically eloquent take on the possibilities of optimism, we can look to the words of 22-year-old poet Amanda Gorman, whose reading of her poem, “The Hill We Climb” was one of the highlights of today’s inauguration ceremony.

Words to live by.

You might also like
It's That Time of Year Again: Pimm's Time!
London, Day 3: de Castelbajac and Zang Toi
Wearing My Heart on My Cape
Previous Post: « Jewels of the Month: Bye, Don! Welcome 46 & 47!
Next Post: Throwback Thursday: Women’s March 2017 »