Let’s see if I can get Part 3 of this 2020 Year in Review post done before it’s 2021. I’m racing the clock here! But I had to take a little break after writing about George Floyd and the history of white violence in this country in Part 2. Catch up here:

Also relevant is this Jan. 30, 2020, BBC story by Cath Pound about a Fashion Institute of Technology exhibit called “Power Mode: The Force of Fashion.” Pound wrote:

“For centuries, clothing has been armour for those who feel alienated from the mainstream, whether because of their views, gender, class, race or sexuality. From the red ‘Liberty’ cap worn by the sans-culottes in the French Revolution, to the ripped denim and slogan T-shirts of the hippies, and the pink pussy hat of the Women’s March, clothing has been used by marginalised groups as a tool of resistance, and in order to be seen and heard by those in authority.”

Although I first approached this Year in Review thinking, “But for two months, I didn’t get dressed at all and then I just wore a t-shirt, denim, boots, and a face mask,” I realized that was a personal uniform. And, during a summer and autumn of protest signs, the signs I held were always echoed by at least one message that I wore on my person. For instance, this photo of my painted denim vest was taken in June during a protest against police violence that ended with … police violence.

Usually my uniform conveyed more than one message — especially because the face masks that have become part of sensible, safe people’s pandemic wardrobes also serve as billboards. It’s interesting that bits of fabric and string muffle our speech also broadcast our views to more people than we’d ever actually talk to in a day. All we have to do is walk by.

Accessories, including jewelry, got in on the action. You can see I’m wearing a Black Lives Matter bracelet in the Instagram photo above. I worn my own 18K gold NASTY necklace design since 2016. (The silver ones are available on my website now.)

I normally don’t wear other jewelry designers’ work, but my colleague Jessica Kagan Cushman’s gold guillotine necklace made me laugh out loud, so I now wear that with the NASTY necklace, in honor of Jeff Bezos. Usually, as in this photo, I’m wearing them with a message shirt and a message mask …

… so when I start adding layers, I’m like a walking newspaper editorial page. The October photo below includes the NASTY and guillotine necklaces (the Black Lives Matter message bracelet and ring can’t be seen); my Pussy Grabs Back painted denim jacket; a pre-election “Vote Betches” face mask by These Pink Lips, the artist that customized the jacket for me; and the ACLU “I Know My Rights shirt.”

Oh, and there were shoes too.

Not every message I wear is a comment on society or politics. Some are personal. The pink feather earring in the October picture is part of the collection of long feather earrings I inherited from my friend Chiara D’Agostino, who died of breast cancer in August. She had seven of these earrings — one for every day of the week — and for months I didn’t feel right if I wasn’t wearing one.

I was able to wear them through last month. It felt especially nice to have that personal memento on the two times this year that I “glammed up,” by which I mean I didn’t wear a top with a political slogan on it. On November 20, I wore a REAL SHIRT to visit the roof of the Metropolitan Museum of Art. 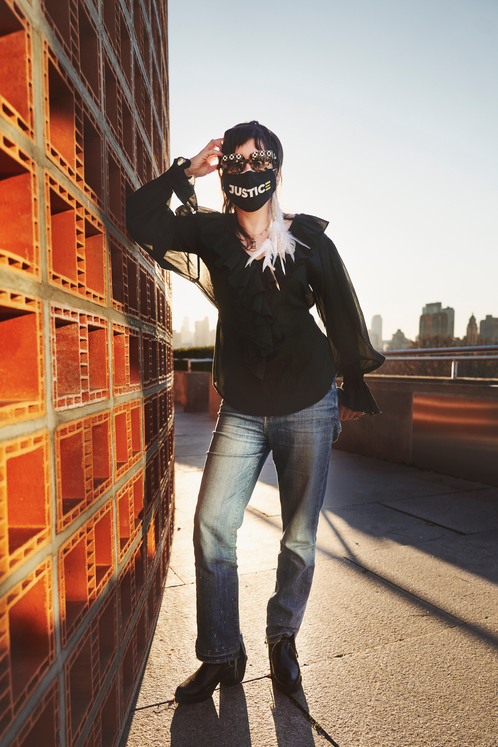 The Justice face mask is from the Black Lives Matter website. That’s my favorite face mask message to wear.

On November 22, I finally managed to wear the longest of the Chiara earring collection. This one is a lot to manage! 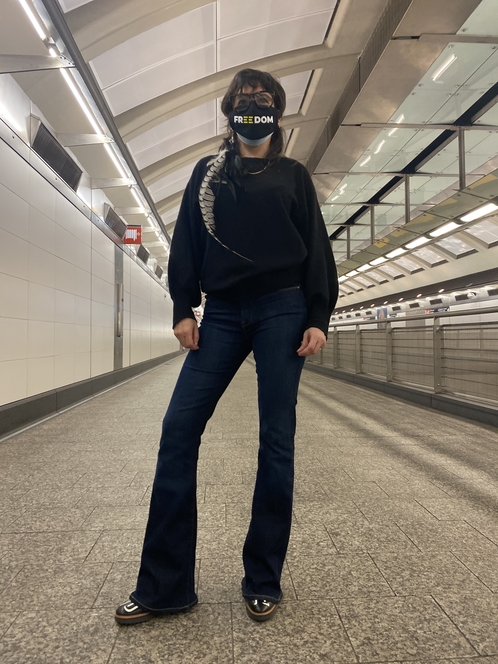 Although I’m wearing the Black Lives Matter Freedom face mask and the VOTE boots by Naturalizer, I considered this a fancy “out of uniform” day because I’m wearing a slogan-less black sweater (Lord & Taylor, 2017 or 2018). Those are also Frame jeans (2019), instead of those baggy Madewell jeans that I literally live in. Remember the little hole those had in the left knee when I first left quarantine in April? It’s grown just a little bit.

We finally got colder winter weather this past month, so I’ve been bundled up in a parka and scarf, making it impossible to wear a feather earring. Or a visible protest t-shirt. I miss the little boost those things gave me in the midst of all the shittiness of 2020. This last month has seemed especially dark despite the defeat of Trump in the election. More than 330,000 people have died of COVID-19 in the U.S. this year — there have been days when the death toll exceeds the death toll on 9/11. The vaccine rollout is disorganized, with COVID-denying politicians skipping to the front of the line and rich people maneuvering for early access, while overworked and traumatized health-care workers are still on the waiting list. Joblessness, hunger, and despair are high and GOP monster Mitch McConnell can’t stand the thought of people who are suffering getting $2,000 in assistance. His empathy is reserved for billionaires who recoil at the thought of paying taxes on their grotesque and ever-growing wealth, which they only have because they ruthlessly underpay their workers. I could go on. For instance, police shootings of Black people are still rampant. The last couple of weeks of Trump are going to be tough, and our social challenges won’t leave with him. So, it’s like, just let me wear a pink feather again, and soon!