In my last post — two weeks ago already, dang! — I wrote about how activists forced an unsafe-for-COVID New York Young Republican Club event out of Manhattan. The club managed to relocate to the Maritime Parc restaurant in Jersey City, but had to keep the venue secret until the last possible minute so it wouldn’t risk losing that spot too. 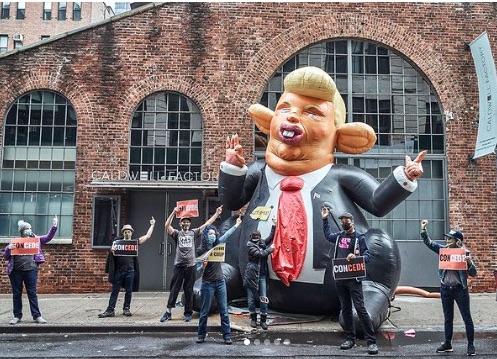 The coda to this story is highlarious. I mean, it’s highlarious assuming no one was sickened by the event, because coronavirus is no laughing matter among people with a strong survival instinct. The Young Republican Club, however, is not overflowing with common sense, so — even after losing their original venue and keynote speaker, and having their event drummed out of their hometown — the club’s guests were feeling all kinds of sassy, sharing photos and video of their maskless festivities on social media, joking about the ‘Rona, and taunting New York Governor Andrew Cuomo.

Yep, that’s “Florida Man” Rep. Matt Gaetz in the photo on the right. Click to learn more about Matt Gaetz.

It is also beyond the pale that Rep Matt Putz – I mean @RepMattGaetz – would participate in this. What a fool.

Matt – You are not welcome in New Jersey, and frankly I don’t ever want you back in this state. pic.twitter.com/j67x9Z2lAf

For the Maritime Parc restaurant, this was more than an exchange of angry words via Twitter and news conference, because Jersey City’s health department shut down the restaurant pending the receipt of a written operational plan of how it would comply with Murphy’s executive orders about mask-wearing and indoor capacity going forward. The restaurant put out a press release that said hosting the Young Republican Club wasn’t personal — just business. My dudes! Saying you’re willing to jeopardize health of many people because you wanted to make a quick buck isn’t a great look! On the other hand, making money in the short-term only to lose more in the long-term is totally in keeping with the Republican party’s economic policies. 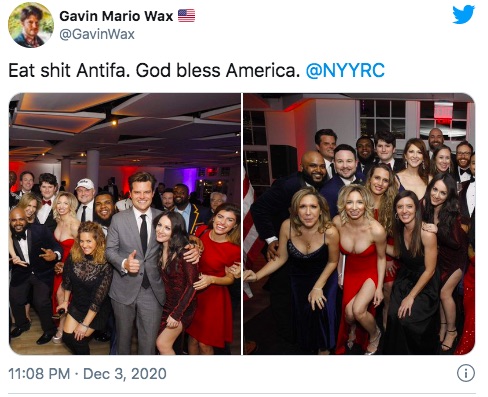 Meanwhile, the U.S. continues to set records for new COVID-19 cases. This Wednesday alone, more people died of the coronavirus than died in the terrorist attacks of 9/11. Vaccine manufacturer Pfizer, which said it has shipped the 2.9 million doses requested by the U.S. government, said it has millions of vaccine doses “sitting in our warehouse but, as of now, we have not received any shipment instructions for additional doses.” Could the lack of government orders reflect a deliberate plan to allow infection to spread? Officially, the Trump administration denies that: In October, Health and Human Services Secretary Alex Azar testified in Congress in October that, “Herd immunity is not the strategy of the U.S. government with regard to coronavirus.” But, as Politico just reported, internal emails have revealed that in July, a Trump appointee argued that the best way to deal with the disease was “if we open up and flood the zone and let the kids and young folk get infected.” The former science adviser, Paul Alexander, also wrote, “If it is causing more cases in young, my word is who cares…as long as we make sensible decisions, and protect the elderely [sic] and nursing homes, we must go on with life ….who cares if we test more and get more positive tests.”

The reality is that even according to Alexander’s own lax standards, the government blew it: The elderly have died in droves. The COVID Tracking Project shows that more than a third of the 300,000+ COVID deaths in the U.S. have come from long-term care facilities and nursing home residents. Hopefully, no extra fatalities among that demographic will be traced to the Republican Club gala, though there is, unfortunately, precedent for that. If the worst comes to past, the next of kin should know that New York Young Republican Club vice president Vish Burra told local NBC News, “If you want to be a leader, you’ve got to show your face and you can’t see your face if there is a mask on it when you are taking a picture.” Priorities, right?