MrB is the chairman of the most amazing organization called the Committee to Protect Journalists (CPJ). You have to click that link and do some reading, because I can’t begin to describe what people in other countries go through to tell the truth. It really offends me when U.S. citizens whine about how they’re suffering so much in the U.S. and the U.S. is depriving them of their rights and how “the media never tells” them anything and blah blah blah. The U.S. is responsible for some really bad shizz when it comes to the press, but we are blessed compared to someone like Andrew Mwenda from Uganda, who has been arrested 11 times since March for running a news magazine. Eleven times! That might be more arrests than crackhead musician Pete Doherty in the same time frame, which is basically saying you’ve been arrested more times than anyone on earth.

CPJ had its annual fund-raising dinner last night. There are links to information on all the honorees here. One who really impressed me is second-time honoree Beatrice Mtetwa, an attorney in Zimbabwe who has been beaten up twice for defending journalists imprisoned for reporting on the outrages committed by the government of Zimbabwe’s dictator Robert Mugabe. (Note that if I were blogging from Zimbabwe, I wouldn’t be able to write something like “Zimbabwe’s dictator Robert Mugabe” without tempting the Grim Reaper.)

Me, the amazing Beatrice, and MrB

Even at the most earnest event, one must give some thought to dresses. As you can see, Beatrice opted for some cleavage. Woot! I wore a vintage dress that I got in 2004. Gorgeous blogger ENC approved it when I sent her advance photos, and I was so happy I took her advice because Bill Cunningham from the New York Times loved it big time! Even if I don’t get in the paper or if I get in the paper but look 10-months pregnant or my slip is showing, I still had a great fashion moment. Thanks, ENC! Here I am with gorgeous client and dinner guest Melissa, who was having a very Audrey Hepburn moment with her short hair and little black dress. 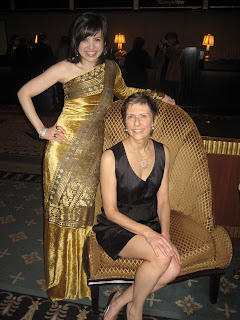 Melissa said the dinner was eye-opening.

The work of the CPJ honorees was awe-inspiring, as always, but Melissa and I had a little awe left over for the CPJ employee who made her own dress.

Don’t forget to read up about CPJ. To donate, click here.
You might also like
What Eryn Wore: Wendy's Chris Benz Dress
More on the Evolving Influence Ethics Panel
Remembering Mr. Blackwell
Previous Post: « Adding to My Art Collection
Next Post: A Janis Joplin Song Is Stuck in My Head »