I surprised my family by asking to celebrate my big birthday on Saturday with a glamorous 5 p.m. dinner at Bareburger. What can I say? There were two little kids attending, and I enjoy The Standard burger, medium well. 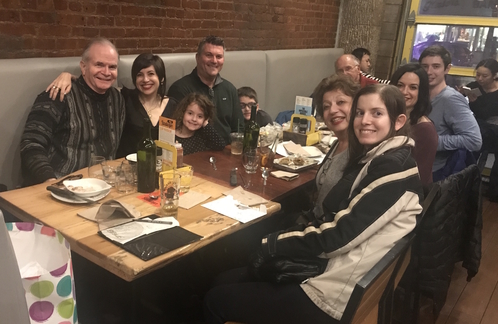 In reality, I was just getting warmed up for a midnight show by ’80s cover band Jessie’s Girl at Le Poisson Rouge. The group is at LPR every Saturday night, and I’d seen them twice before, including on Halloween 2016. They’re so good and so funny!  I was curious about what kind of crowd would be there the Saturday before Christmas — as a cab driver said to us, “City’s #1 slow. Nothing!” — and, sure enough, a venue that normally holds more than 600 had maybe 100 people tops. As it turned out, that made the show even more fabulous.

Not only did Jessie’s Girl perform with the same energy they’d bring to a full house, but all the audience members got personal attention … especially me, because I was the only birthday girl in the place. I got a birthday congratulations while dancing on stage to “Girls Just Want to Have Fun” and then a “Happy Birthday” serenade to the tune of Scandal’s “Goodbye to You.”

After that, vocalist Chris Hall (who does Prince, Pete Burns, and David Lee Roth, among others) was like, “I guess this is the Wendy show.”

If you go see Jessie’s Girl on a normal night — which I HIGHLY recommend doing — be sure to situation yourself in the front row so you can interact with the band. This is my favorite video from the night. Wait for the end!

Finally, who would have guessed that Bonnie Tyler’s 1983 “Total Eclipse of the Heart” would make people go wild more than 30 years later?

I was extra-excited when the band performed this one because I thought, “I have an excuse to watch/blog the literal version of that video AGAIN!“: “Drinking wine. Douchebags!”

I’ll have photos of the double-vintage dress I wore for my birthday in my year-end “What Wendy Wore” post. I was going write about it now, but I’ve fallen down a rabbit hole of literal videos and I can’t! Stop! Watching! (New faves: “Bad Romance,” Heart-Shaped Box,” and “Love Is a Battlefield.”)

You might also like
What Wendy Wore: Blanche Devereaux Does New York
The Hardest-Working Woman in Show Biz
Jewel of the Month: Stars on Your Ears
Previous Post: « Merry Christmas From the Obamas
Next Post: Wednesday’s Video: Year in Review and a Birthday »