Madonna needs to let me rummage around in her closet because I’ve been blogging about her pieces by artist Keith Haring — one by one — for 10 years. I need to take a complete inventory, because this is getting ridiculous. In 2010, I reminisced about the covetable Keith Haring skirt Madonna wore in her “Borderline” video. In 2013, I moved on to her Keith Haring denim jacket. And now that painted leather jackets are on my mind … 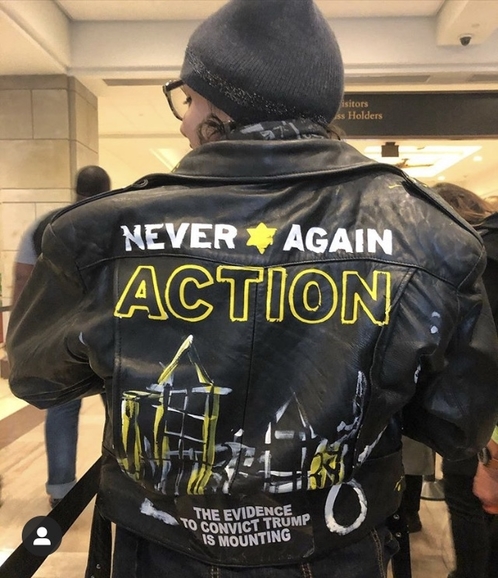 My personal jacket. Not painted by Keith Haring but by Andrew Lyko. Click for more information.

… two leather jackets painted by Haring for Madonna drew my eye when they appeared in tributes to Haring this May 4, which would have been his 62nd birthday. There was a black leather jacket, which you can see in Keith Haring: The Authorized Biography by John Gruen and on Instagram. And there was the DayGlo pink jacket and skirt that Madonna wore to perform at Haring’s massive 26th birthday party at Paradise Garage in 1984.

CHECK OUT THE 1984 PHOTOS AND VIDEO HERE!

Here are a couple of back-up links for the pink outfit, in case the page linked above disappears. I swear, you can’t count on any image or video lasting on teh Interwebs and I’m so sick of finding my old blog posts full of dead links and error messages where photos and videos used to be.

In a 2009 Rolling Stone interview, Madonna said, “I … have a leather jacket that Keith Haring painted on that I would never give up.” I wonder if that’s the pink one or the black one, or if she really meant both. Ugh. Five years from now, I’ll probably spot a photo of a shoe or a keychain that Haring painted for her and have to do yet another post. By the way, in Haring’s bio, he said the birthday crowd’s reception of Madonna performing “Like a Virgin” and “Dress You Up” wasn’t “exactly ecstatic” because her career-making debut album hadn’t come out yet: “Six months later, they would hear those songs six times a day on the radio!”

In current-day leather jacket news, here’s singer Kehlani advertising her new album on the back of her black jacket in an embeddable Instagram post that will no doubt be deleted just to spite me and my poor blog.

AND CANT NOBODY HOLD ME BACK NOMORE🦋 LONG LIVE LEX #ItWasGoodUntilItWasnt

Kehlani’s jacket has me wondering if I’ve been surrounded by painted leather jackets all my life and I’m only noticing now that I’ve joined the club. And speaking of clubs, don’t miss this oral history of New York City’s famed Paradise Garage. I linked to it above but it deserves its own shout-out. Here’s another piece on Paradise. Old-school New York: A lot of things were shitty, but we had a mind-blowing artistic, creative scene. I miss that, especially now. True, we have substantially less crime than in the 1970s and 1980s, but things are still shitty for a lot of people; creatives can’t afford to live here; and corporations and “investors” own everything.