Last night, Democratic presidential candidate Senator Elizabeth Warren gave a rousing speech in New York City’s Washington Square Park. I was there with my fellow activist friends Debra and Susan. We all agreed that Warren gave off the energy of a winner.

Warren is famous for taking photos with anyone who wants one after one of her appearances, even if it takes four hours, like it did yesterday. I already had a photo with her from an appearance she made in March …

So today I met @elizabethwarren #presidentialprimary #elizabethwarren #lic #neverthelessshepersisted … also first time I’ve worn that suit since 2005! (I was wearing it for my pre-Warren event) The Versace faux-corset top under it would not have been appropriate at Lehman Brothers.

… so I was like, “Debra, it’s up to you,” as the two of us tried to find the end of the photo line in the massive crowd immediately after the speech (we hadn’t found Susan yet!). Eventually, we took a leisurely piña colada break at Negril Village a couple of blocks away. When we ventured back to the park, everything had gotten very organized so we got back in line feeling refreshed. Maybe it was the rum, maybe it was the excitement of the crowd, maybe it was the cheers led by Warren volunteers, but when it was my turn for a photo, I saw Warren’s hand held out for a handshake and threw my arms around her instead. 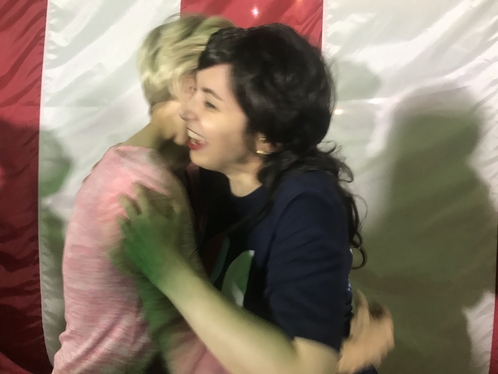 I can’t explain it … I’m usually more of a handshake person tbh.

She then complimented my Indivisible t-shirt. 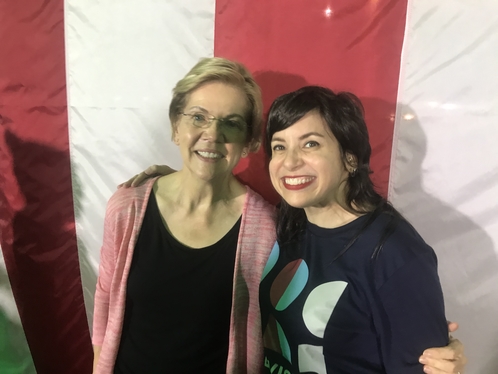 Indivisible is a great way to get politically involved. Find a chapter in your neighborhood by clicking here and searching the Indivisible map by zip code.

I don’t think I said anything coherent to her this time. In March, when I shook Warren’s hand like a normal person, I managed to blurt out a thank you for her plan to break up the tech monopolies, which she had just announced that morning.

For #mulletmonday here I am with @elizabethwarren … and I’m looking like a literal hot mess because I was wearing a heavy parka inside for hours and only just took it off for the photo and this is my hair texture when I’m sweating and have no keratin treatment! But at least you can see my haircut as well as a smart presidential candidate. Thanks to @nickthe_writer for having a fully charged phone for photos and being okay with holding hands/arms with someone he just met so we could stick together while in line. #newfriends #elizabethwarren #presidentialprimary #mullethairdontcare #mullet #hotinherre #keratinqueen

The greed of the big tech companies knows no limits, and there was further evidence of that today from a Wall Street Journal story that revealed that last year Amazon had secretly changed its search algorithm to favor products that produce the most profit for it, rather than most relevant and best-reviewed products it had highlighted for more than a decade. It made the change despite objections from its own engineers and lawyers, who pointed out that this was monopolistic, anticompetitive behavior. Amazon is the biggest online retailer in the world and its listings can “make or break a product,” the Journal said:

“The issue is particularly sensitive because the U.S and the European Union are examining Amazon’s dual role — as marketplace operator and seller of its own branded products. An algorithm skewed toward profitability could steer customers toward thousands of Amazon’s in-house products that deliver higher profit margins than competing listings on the site.”

I urge you to read the whole article so that you really understand — on an emotional level, not just an intellectual one — that there is no level of profit that will satisfy big corporations like Amazon, or billionaires like Amazon founder Jeff Bezos. Bezos is the richest man in the world, thanks to the efforts of a global workforce that is underpaid and overworked. So what does he do to give back? Um, pretty much nothing. Late last year, Amazon brokered a secret deal with New York City’s awful mayor and state governor to get big tax breaks to open a headquarters in already-overdeveloped Long Island City in Queens, dangling the vague promise of “jobs” in return. (The plan was fortunately dropped this February after a massive local outcry.) You can understand why Amazon would want to lower its tax burden though because … oh, wait a minute, Amazon barely pays any federal taxes at all.

As for Bezos personally, he made it clear in an April 2018 interview with Business Insider that he doesn’t think much about the needs of people here on earth, saying, “The only way that I can see to deploy this much financial resource is by converting my Amazon winnings into space travel,” and revealing he’s liquidating a billion dollars in Amazon stock each year for that cause. It seemed some of the negative reaction to that had trickled back to him by September 2018, when he and his then-wife MacKenzie a $2 billion philanthropic effort to help homeless families and low-income children, but I consider that to be a momentary, face-saving urge because this summer, he was affirming his commitment to space:

“We humans have to go to space if we are going to continue to have a thriving civilization,” Bezos says. “We have become big as a population, as a species, and this planet is relatively small. We see it in things like climate change and pollution and heavy industry. We are in the process of destroying this planet. And we have sent robotic probes to every planet in the solar system — this is the good one. So, we have to preserve this planet.”

His idea for preserving the planet is not to stop the destruction wreaked by monstrous corporations but to simply send all that unpleasant manufacturing stuff somewhere else so that Earth can be turned into the ultimate gated community for the likes of him. I’m not making this up! Here’s more from the July 2019 interview:

“We send things up into space, but they are all made on Earth. Eventually it will be much cheaper and simpler to make really complicated things, like microprocessors and everything, in space and then send those highly complex manufactured objects back down to earth, so that we don’t have the big factories and pollution generating industries that make those things now on Earth,” Bezos says. “And Earth can be zoned residential.”

I’m sure Bezos and Amazon will be ready to ensure that only the “right” (meaning white, rich) people get to stay on Earth, seeing as the company is already enabling the worst behavior of the U.S. Immigration and Customs Enforcement (ICE) agency. The data-mining company Palantir is the big offender when it comes to providing ICE with information to stalk, detain, and deport people who are often working hard and raising families in this country, but Palantir relies on Amazon Web Services cloud computing to house its data. As an article in MIT Technology review reported:

“In order for Palantir to secure its contract with the government, [Palantir’s Investigative Case Management system] had to be hosted on a federally authorized cloud service. An online government database shows that Amazon holds the largest share, 22%, of federal authorizations under the FedRAMP program, which verifies that cloud providers have the necessary security requirements to process, store, and transmit government data. More important, Amazon holds 62% of the highest-level authorizations, usually needed to handle data for law enforcement systems.”

Immigration-rights activists argue that Amazon could help knock creepy Palantir out of business by not hosting it. Amazon could even influence government behavior due to its outsize involvement in federal work. But why wrestle with large ethical questions when you could spend your time designing new search programming to wring a few pennies more out of your naive customers? By the way, I don’t use Amazon now — not for shopping or even for The Marvelous Mrs. Maisel — and I don’t miss it one bit. I promise you that Amazon is much easier to remove from one’s life than Google or social media, so I suggest you try it. Whenever you’re tempted to use it, just remember that Jeff Bezos wants to send you to space so he can save the planet for himself. Do you really need to spend your hard-earned money in the service of a comic-book supervillain’s grand plan?

You might also like
RIP, Margaret Hayes
The History of the Nixon Protests, From L.A. Kauffman
Meet the Real Andrew Cuomo
Previous Post: « The Weeks in Review
Next Post: What Wendy Wore: Not Autumn Yet »