Some days it is challenging to read the newspaper around here … 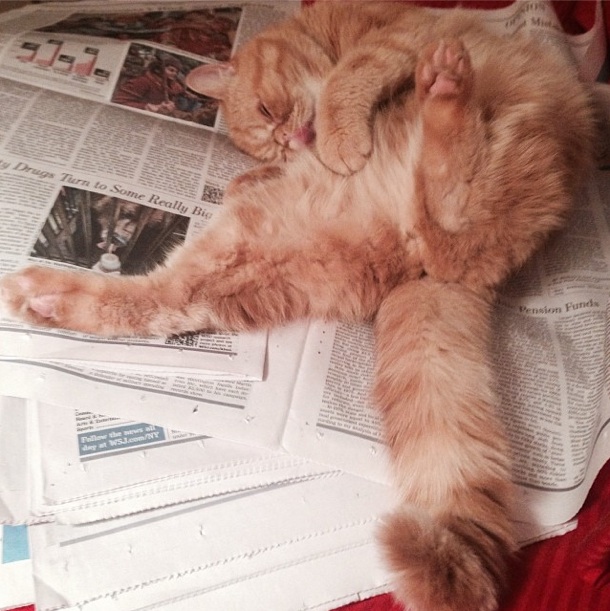 … but I usually prevail after scooping up FitzRoy and depositing him in another room.  Those of you with more recalcitrant cats can catch up with the good stuff online. For instance, last week, the Wall Street Journal ran an interesting series called “The Lobotomy Files,” about how the U.S. government lobotomized about 2,000 mentally ill veterans — and possibly more — during and after World War II.

And, while I generally prefer my newspaper on paper, I read the New York Times “Invisible Child” series on a 12-year-old homeless girl named Dasani entirely online where all five parts were posted simultaneously instead of day-by-day. Reporter Andrea Elliott and photographer Ruth Fremson spent 15 months with Dasani and her family in an immersive way that reminded me of a short-term version of one of my favorite journalistic nonfiction books: Random Family by Adrian Nicole LeBlanc, which took its author more than 10 years to research and write. I was captivated by Dasani’s charisma and how she attempted to cope with her surroundings, though the Times’s emphasis on the contrasts between the conditions of Dasani’s life and the Fort Greene, Brooklyn, neighborhood’s gentrification seemed a bit much to me. I agree with Harold Pollack in the Washington Post that gentrification, while colorful, isn’t causative. As Pollack — the Helen Ross professor at the School of Social Service Administration and co-director of the Crime Lab at the University of Chicago — points out, “Homeless kids in Detroit or East Saint Louis, Ill., are spared the indignities of gentrification. It’s not clear they are any better off for that.” The real-life protagonists of Random Family didn’t live near any wine stores selling $740 bottles of Chardonnay or donuts shops selling flavors like blood orange and hibiscus, and the absence of those retail experiences didn’t do anything to alleviate the generations of sexual abuse and drug use that helped keep LeBlanc’s subjects trapped in a cycle of poverty.

Speaking of the cycle of poverty, the usual suspects have criticized Dasani’s mother, Chanel, and her stepfather, Supreme, for their frequent self-sabotage, as if it were reasonable to expect Chanel to learn any kind of helpful life skills while growing up with a crack-addicted mother, bouncing to different homes and contracting tuberculosis while living in a homeless shelter with her mother before succumbing to crack herself. People learn what they grow up with, which is why it’s so important to help the children who are exposed to this kind of trauma. Even if you do blame the parents, surely the children are blameless, and they deserve better than a mouse-ridden homeless shelter with reports of sexual predators on staff. As Pollack writes in the Washington Post:

“No one should claim with any confidence that we could have prevented or can solve the myriad problems that beset Dasani and her family. Some of their problems may not be fixable. But there are things we know we can do. We know Dasani could at least go to sleep in a clean and safe place where her family is secure from strangers’ intrusions or predations. So we should at least do that.”

The Times says that people who want to help residents of the Auburn Family Residence — the shelter in Brooklyn where Dasani, her parents and her seven siblings lived in one room — can contact Georgianna Glose of the Fort Greene Strategic Neighborhood Action Partnership at drglose@fortgreenesnap.org. If you’d like to donate to a trust for Dasani and her siblings, send your check to:

Inquiries can also be made to invisiblechild@legal-aid.org.

If you want to help other children by improving their public-school educations, DonorsChoose.org is one of my favorite options. From the website:

“DonorsChoose.org is an online charity that makes it easy for anyone to help students in need. Public school teachers from every corner of America post classroom project requests on our site, and you can give any amount to the project that most inspires you.

When a project reaches its funding goal, we ship the materials to the school. You’ll get photos of the project taking place, a letter from the teacher, and insight into how every dollar was spent. Give over $50 and you’ll also receive handwritten thank-yous from the students.”

DonorsChoose has been around since 2000 and I first did it quite a few years ago. I must have breezed past that second paragraph I quoted above because I was very surprised when I got an envelope stuffed with 30 construction paper thank-you cards! The project I contributed to most recently was the purchase of an extensive list of biographies intended for a fourth grade class in New York’s Chinatown. I was a big reader of biographies at that age and I still prefer bios and other nonfiction, so I was happy to pitch in on that one.

Speaking of nonfiction, it didn’t hit me till today — when I read it somewhere online — that the Times had broken its policy on censoring expletives and actually spelled out “fuck” in part 4 of the “Invisible Child” series. (Public editor Margaret Sullivan provides the reasoning behind that here.) It figures that I wouldn’t notice the word when it’s written out because it’s the censored version that always stops me dead in my tracks. Things like “f—” and “s—” seem stupid enough, but I really loathe the style of taking out only the vowel. I had to stop reading one coy pop-culture website because it was so littered with “f-ck,” “sh-t,” “d-mn,” and “c-nt.” Every time I came to one of those, I would scream inwardly, “I KNOW EXACTLY WHAT THAT SAYS! HOW IS THIS PROTECTING MY FUCKING EYES FROM YOUR FILTH?” Man, if you’ve got to censor, take out the whole damn word and substitute “expletive deleted” (though obviously someone like me will still take a moment to figure out exactly which obscenity would fit in best).  Or turn the word into fun jewelry, for fuck’s sake! Anything except that vowel deletion move, please.

You might also like
9/14/01
RIP, Purrkoy the Kitten
Peep Me in the Swarm the Senate Video
Previous Post: « Latest Blog Mentions and the Week in Review
Next Post: Gift-Giving for Teens Made Easy! $200 and Under. »