I must thank gorgeous blogger The Perfect Ratio for finding and sharing this wonderful juror qualification questionnaire. “I want a donut now, you fuck!!” is going to be my new personal motto. 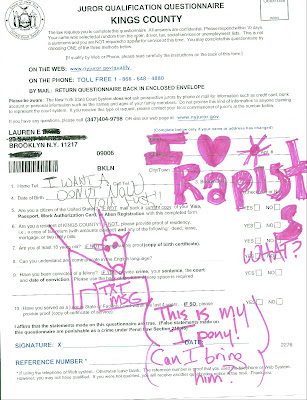 I’ve been called for jury duty more than anyone else I know. This irritates me because I’ve done my time. In 1996, I spent six weeks on a jury for a drug-trafficking case after answering “no” to the only voir dire question I got, which was, “Do you believe all Colombians are drug dealers?” My boss was furious that I had “asked” to be on the jury by answering my question “incorrectly.” He became so threatening that the judge had write a letter informing my boss that it was against state law to penalize someone for serving jury duty. Speaking of penalizing, I should have asked the judge to throw in: “P.S. Stop touching yourself in the office.”

The “I heart rapists” on the jury form above reminds me of a Celebrity Jeopardy! skit on Saturday Night Live, when “Sean Connery” selects the category, “Therapists.”

All the Celebrity Jeopardy! skits featured Will Ferrell as beleaguered game show host Alex Trebek, struggling with moronic celebrity contestants who can’t come up with answers for categories such as “Colors that end in -urple.” Darrell Hammond plays a hostile Sean Connery in most of the skits. I once watched all 13 clips one after another, and I recommend that you do the same for maximum hilarity. See them at Funny or Die. Here’s one of my favorites, in which “Burt Reynolds” changes his name to “Turd Ferguson.” It starts out with Trebek asking the contestants to please “refrain from using ethnic slurs.” Ha! Last time I did that, I got jury duty.

SNL Celebrity Jeopardy 10-23-99 – watch more funny videos
You might also like
This Is Fine
Up, Up and Away in Wine Country
Career Options
Previous Post: « Cuddly Things
Next Post: Valentine’s Day Clearance Sale, Part I »