The rollout of my Immortal Style campaign continues! In this third image, 76-year-old model Judith Boyd — aka the Style Crone — wears the full suite of my Mary Queen of Scots snake designs: necklace, earrings, ring, and tiara. 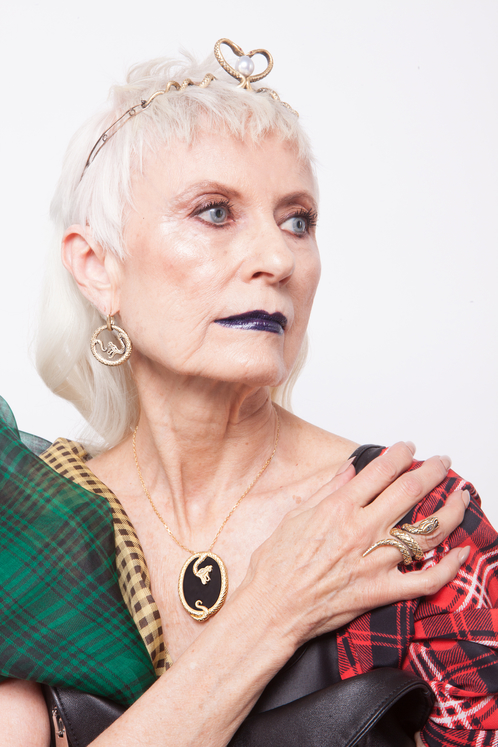 This collection was inspired by the term that the advisors of Elizabeth I used for Mary: the bosom serpent, meaning a threat held too close. Mary was ousted from the Scottish throne in favor of her infant son in 1567, and she fled to England for sanctuary in 1568. Unfortunately for Mary, she had a blood claim to the English throne as the great-granddaughter of King Henry VII. (Elizabeth was the same king’s granddaughter.) Anyone disgruntled with Elizabeth now had a potential replacement at hand, and conspiracies to elevate Mary sprung up in England and Spain. 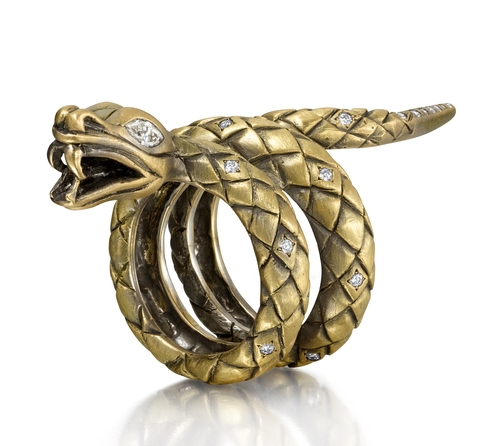 Elizabeth was the only surviving child of Anne Boleyn, the second wife of Henry VIII. Anne was beheaded at her husband’s order, and Elizabeth was not going down like her mother. Therefore, to contain the threat to her rule, Elizabeth had Mary imprisoned for 19 years. For nearly two decades, Elizabeth resisted her advisors’ pleas to execute Mary and permanently end the problem. The queen’s refusal wasn’t about having mercy for a relative, however. Anne Boleyn had been a mere queen consort, not a queen in her own right. To execute a true anointed queen — which Mary was, even if she wasn’t wanted in Scotland — had implications for Elizabeth’s divine right to rule. But, finally, there was one conspiracy too many, and Mary was finally sent to the executioner’s block on Feb. 8, 1587, at the age of 44. Hey, in a world full of tyrants, you can’t show weakness. Better to be the top tyrant, as I explained at length ahead of last Sunday’s Game of Thrones finale.

READ MY POST ON HOW A REAL GAME OF THRONES HAD TO BE WON.

But that was then, and this is now. Absolute monarchs who use violence to rule — whether real like Elizabeth I or fictional like Daenerys Targaryen — should be condemned to reign only in history books, popular entertainment, and fine jewelry collections. In the United States of America, we have never had a tyrant on a throne, and we still don’t have one … yet. However, it is clear we have a president who is looking for totalitarian power, just as it is clear that all levels of government are infested with white men who would prefer to see women in prison or dead rather than empowered. Fuck that!

All people deserve freedom, choice, and sovereignty over their own bodies, and that includes abortion on demand for anyone who has a uterus. That’s why from today through June 22, 2019, I’ll donate a portion of the proceeds of any sale over $100 — whether it is made via my website or 1stdibs.com — to your choice of the abortion-rights groups listed in this blog post. I haven’t settled on a particular percentage of the proceeds, because I want to do as much as I can, but some designs have tighter margins than others. So feel free to inquire about a purchase and I will tell you the exact amount I will donate — whether that is $10 or over $1,000. I will also make the donation in your name so you get a confirmation from the organization. I always do that so the customer knows it’s real! Email me at info at wendybrandes dot com with any questions.

Tomorrow, I’ll share some other suggestions for retail therapy that contributes to a good cause. In the meantime, if you missed my YouTube video about how Judith came to be the face of my “Immortal Style” campaign, check out it out now.