I swear that I spent a good part of yesterday frozen in the cringe position.

LMAO!!! This is how you know you’ve been on a controversial industry panel. When someone captures you at this moment and it symbolizes the whole event for them. 😹😹😹😹 cc @_eryn_elizabeth @therealbernmack #halp #goldconference #jewelrybusiness

That’s because the day after the New York Times published Taffy Brodesser-Akner’s article about the extensive gender discrimination and sexual abuse at jewelry giant Signet Jewelers, another important industry player tried to get cute with gender references on Twitter. Spoiler alert: 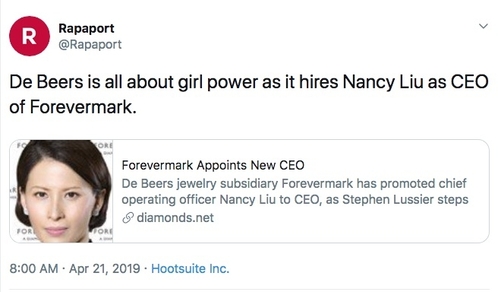 Forevermark is a prestigious, consumer-facing diamond brand that was launched in 2008 by De Beers, the company that monopolized the diamond market for about a hundred years. While De Beers’ anti-competitive hold on the industry weakened in the 1990s before collapsing in this century, it’s still a huge player in the jewelry business, so taking charge of the day-to-day operations of Forevermark is a big deal that should be covered as seriously as any other top-level executive appointment would be. (I was a business journalist; I wrote these things.)

The article itself further diminished Liu by skimping on its description of her professional history. It’s true that, as Rapaport reported, Liu was most recently Forevermark’s chief operating officer, after joining the brand in its early days as president of its Asia-Pacific region. Before that, Rapaport said, she was “… employed by L’Oréal, Louis Vuitton and the Boston Consulting Group.” Also true. But look at the way Instore Magazine elaborated on her experience:

“Prior to her tenure at Forevermark, Liu specialized in corporate management at The Boston Consulting Group, consulting global luxury brands with the aim to develop their businesses in China. Previously, Liu was the vice president of merchandising at Louis Vuitton Asia Pacific, servicing Louis Vuitton across 14 countries, and general manager for the LVMH Watch and Jewelry division managing TAG Heuer, Zenith, Dior, Ebel, Chaumet and Fendi.”

The Instore Magazine Nancy Liu sounds more impressive than the Rapaport Nancy Liu, eh? Having had personal experience with the way the omission of certain details can be used to undermine a woman (you can find that near the end of this post), I awarded the “girl power” tweet my Nope of the Day.

Honestly, “girl power” in this tweet earns these rings pic.twitter.com/jur7DwRLEq

By the way, that’s what I’m doing on Twitter now: Handing out NOPE ring photos when I’m displeased. And it turned out that I jumped the gun on Rapaport because the “girl power” tweet was followed with this equally NOPE-worthy “mail/male order” pun. 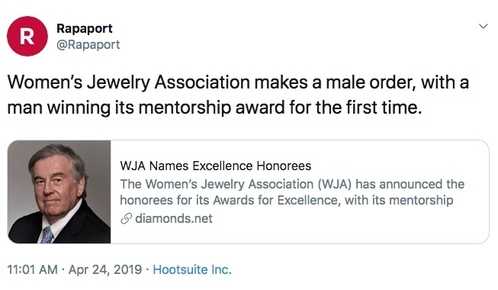 About 12,000 words and two years of reporting went into that article about the mistreatment of women at Signet that was published by the New York Times — and I can’t stress this enough — Tuesday. Maybe there could have been a 24-hour ban on side-eye-worthy gender references in tweets? Then there’s the actual story. I haven’t worked with Mark Hanna, the “male-order” winner of the mentorship award from the Women’s Jewelry Association, though I’m sure I’ve shaken his hand at industry events. If other women say they found a great mentor in him, I 100% believe them. That said, I think anyone in his position — regardless of gender — should feel obliged to mentor younger people.

Hanna is the chief marketing officer of Richline, which is a Berkshire Hathaway company. Berkshire Hathaway is run by billionaire investor Warren Buffett, one of the wealthiest people in the world, according to Forbes. (At least Buffett is a billionaire with a philanthropic plan: In 2006, Buffett pledged to give away 99% of his wealth during his lifetime “or at death.” Bill and Melinda Gates joined in and the three asked other ultra-wealthy folks to commit to a “giving pledge.”) With the amount of power invested in him by Warren Buffett, Hanna is merely doing the decent thing by lifting up people who work for or with him.

Does the Women’s Jewelry Association really have to give him a cookie for that? Perhaps, I thought at first. After all, the organization has been around since 1983, when it formed because the main networking organization in the business — the 24 Karat Club of the City of New York — didn’t admit women till 1987. The first WJA Awards for Excellence dinner was held in 1984. Maybe it is time for a dude to get the mentoring award after 35 years, I mused, as I clicked through to the full story. That’s when I learned this is the award named for the beloved industry mentor Cindy Edelstein, who died in 2016. As Rapaport put it:

“He [Hanna] is the first male to receive the prize in its four-year history. Previous recipients include Cindy Edelstein, Peggy Jo Donahue and Bev Hori.”

The first man to win the prize in four years? Dang! I’m sorry the men of the jewelry world had to tough it out for that long! That must have been really painful for them, like almost as bad as not being allowed to join the 24 Karat Club for 85 years! I just wish the Rapaport story about Nancy Liu — the one that the “girl power” tweet led to — had been as specific about her possible trailblazer status, which remains unclear to me. The story did say she is succeeding Stephen Lussier as Forevermark’s CEO, and that he was in that position since 2009. (He’ll remain Forevermark’s chairman and the De Beers Group executive vice president for consumer and brands.) From that, I figure that unless there was an unnamed female CEO in Forevermark’s earliest days, Liu is the brand’s first female CEO. Of course, if she’s only the second CEO ever for that relatively new division, it would be much more meaningful to find out how many female executives of equivalent rank there have been at De Beers, the parent company, over its 131 years of existence. Whether Liu is the first, second, or the latest in a long list of top female executives at De Beers, that’s the real “girl power” story, and if I were being paid to write business news, I’d make the call to find out right now. But I’m not being paid, and these days I’m making an effort to just say NOPE to doing other people’s work for free. I find refusal quite empowering. If anyone else has the answer, let me know.