Speaking of the March for Our Lives, so many people emailed or messaged me to tell me that my almost-husband Paul McCartney was at the New York protest. Alas! This the second time I’ve been in Sir Paul’s vicinity (in a non-concert situation) yet missed seeing him. Someone please put a GPS on that man so I find him and embarrass myself in front of him, which is what I like to do with famous people.

I mentioned a couple of the excellent speakers from the March for Our Lives in yesterday’s post, but I’ve got to give an additional shout-out to Parkland, Fla., shooting survivor Samantha Fuentes. She withdrew from Marjory Stoneman Douglas High School after being shot in one leg on February 14; shrapnel injured her other leg, and more shrapnel remains embedded behind her cheek and eye. You wouldn’t have guessed at the start of her passionate speech to the crowd in Washington, D.C., that she was “absolutely terrified” to speak — until she stopped and threw up behind the podium as the live cameras panned away. Then she recovered; announced, “I just threw up on international television, and it feels great!”; and finished her speech. Harry Potter author J.K. Rowling paid tribute to the 18-year-old’s bravery, to Sam’s delight.

She got shot, she watched her friends die, she stood up in front of millions, threw up out of nerves, laughed about it, then finished her speech. #SamFuentes, there are no words ❤️ https://t.co/orbD7laaRm

Props to this Twitter user for chiming in to say, “Why would you be surprised that @jk_rowling believes a small band of dedicated, intelligent, and threatened teens, despite personal losses, could unite for common good, and in doing so, save and inspire a nation?” Good one!

The New York rally speakers were equally inspiring. Highlights included Harlem Mothers S.A.V.E. co-founder Jackie Rowe-Adams, who gave a rousing introduction to Columbia University student Nza-Ari Khepra, the co-founder of Project Orange Tree. In 2015, Project Orange Tree led to the launch of Wear Orange Day on June 2 — a date chosen because it was the birthday of Khepra’s friend Hadiya Pendleton. Hadiya was 15 when she was shot and killed in Chicago on Jan. 29, 2013, just over a week after she had performed as a majorette during celebrations at President Obama’s second inauguration in D.C. 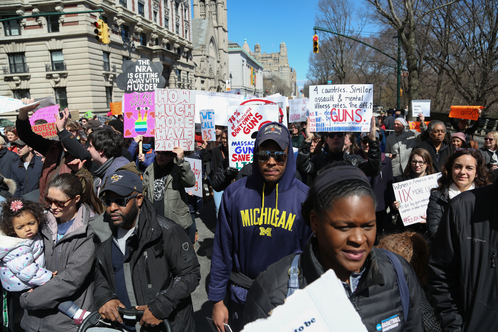 Project Orange Tree is just one example of gun-violence activism organized by young people of color that never captured the national imagination the way the outcry of the mostly white Parkland student leaders has. Thankfully, the Parkland students are aware of that inequity and have been deliberately using their spotlight to amplify the voices of minority groups, as their elders failed to do. 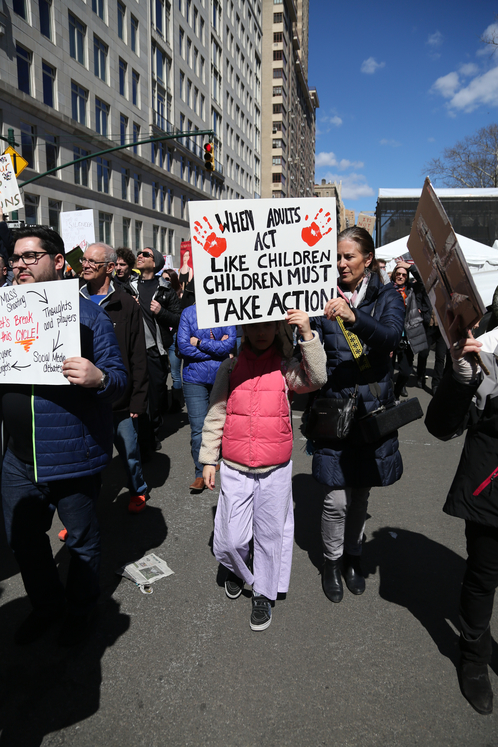 Maybe the New York Times, for instance, will cover Wear Orange Day differently this year than it did last year, when a fashion-oriented story led with the words and action of the white celebrity supporters. As that story appears on the website, the first two photos are of famous white women. Cleo Pendleton, the mother of Hadiya, makes it into the third photo with actress Julianne Moore. You have to read seven or eight paragraphs to get to a quote from Nza-Ari Khepra.

Another neglected organization that was highlighted at the New York rally was Guns Down, Life Up, which was launched in the city in 2011 to break the cycle of gun violence in minority communities. The group’s representatives at the rally included 11-year-old Christopher Lane, who led the crowd in chants before segueing into a musical performance. My gorgeous friend Tina, noting that the ever-younger rally speakers were more poised than she and I have ever been in our longer lives, wondered aloud if we were going to be put to shame by a remarkable five-year-old next. While we didn’t get down to that age bracket in New York, you can watch nine-year-old Yolanda Renee King– the granddaughter of Martin Luther King Jr. — wow the Washington marchers. 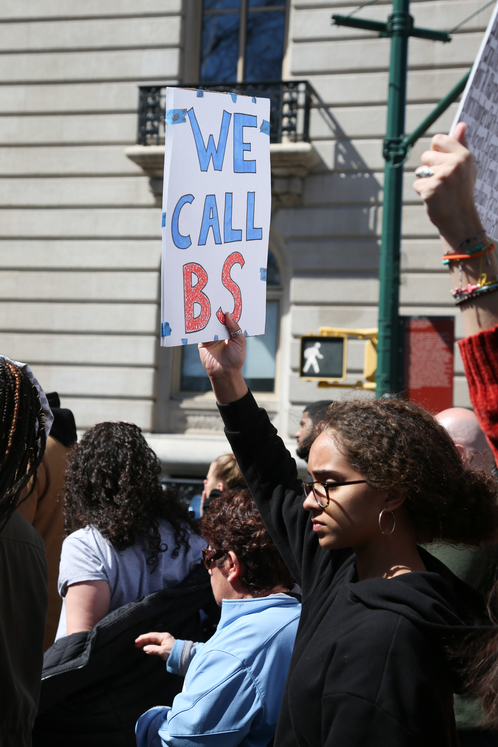 Finally, I’m still looking for the name of the speaker who survived the 2017 Las Vegas massacre, but I did manage to write down a quote that flies in the face of the NRA’s “good guy with a gun” myth: “I could have had a hundred guns to use but I couldn’t have done anything.” That, in turn, reminds me of this chilling story from a collaboration between Buzzfeed and The Trace, a nonprofit news organization that covers nothing but U.S. gun violence. Alexis Bukrym, 23, was living with her best friend Anthony Schwartz, 21, in Ocala, Fla., when he decided to startle her as a prank. She shot him in the chest with the revolver she kept under her pillow for “security.” He barely survived; a photo shows the horrific scars he bears. Read through to the end, and tell me what you think. By the way, since 2015, there have been at least 47 occasions in which a jumpy gun owner shot a friend, family member, or emergency responder they mistook for an intruder.

You might also like
Hey, New Yorkers! It's Time to Vote!
The Week in Review: In the News and on the Blog
Met Gala Finale, Week in Review
Previous Post: « Sign of the Future: March for Our Lives
Next Post: Jewels of the Month(s): Custom Wedding Bands in 18K Gold »