The New Republic magazine celebrated its 100th birthday with a big dinner in Washington, D.C., last night and MrB and I were invited. Bill Clinton was the keynote speaker and, during the cocktail hour, Bill popped up a few feet away from us. He was immediately besieged by hand-shakers and photo-takers.

As the party organizers ushered everyone to their tables at the Andrew W. Mellon Auditorium, Bill lingered with a crowd around him. MrB and I lingered as well, as I began to wonder aloud whether I should ask for a photo too. MrB said, “Do it!” and I said, “I’m way too shy! I’ll feel silly!” Chris Hughes, the 30-year-old owner of the magazine, stopped to chat for a moment and was like, “Huh? Go for it!” Chris was one of the first employees of Facebook, which is how he became worth hundreds of millions of dollars and bought a magazine while still in his 20s. I figured if Chris tells you to go for something, it might be worth going for, so after the crowd thinned even more, I sidled up to Bill.

Now, I’ve mentioned before that MrB is an absolutely terrible photographer. Everyone has to have one flaw — obviously, MrB is perfect in all other ways — and this is his. No matter how many years I’ve used one camera, for instance, MrB never catches on to basics like which button to push in order to take a picture. It’s quite stressful, which is why I think I look a bit manic in many of my outfit photos. Last night, MrB was all cocky about my taking a photo with Bill until the moment he realized he had to wield the camera, at which point he got very nervous. I hissed, “Just push this big button here like you always do!!!” and made my move on Bill. The former president and I waited for about 15 painful seconds while MrB repeatedly pushed the button and no flash went off in the dark room. I figured I’d lost my chance and released Bill back into the wild.

When I snatched the camera back from MrB, I found he’d somehow hit the record button a full minute before trying to take the still pictures. As a result, I have this priceless video.

I need some time to recover before I can accurately rate this moment on my scale of celebrity embarrassment. Is this worse than mentioning Family Guy to Tom Brokaw … twice? I’m not sure anything can be as bad as antagonizing my feminist idol Gloria Steinem. Imagine if I had that on tape!

By the way, the “I love her” that Bill says as I’m desperately shaking his hand refers to my gorgeous friend Barbaralee Diamonstein-Spielvogel. Barbaralee is a big Democratic supporter. Her husband Carl Spielvogel was appointed ambassador to the Slovak Republic by Clinton in 2000, so I name-dropped her as I introduced myself.

The dress that will be forever linked in my mind to this mortifying moment was the purple Zang Toi trench gown that I wore to the Vanity Fair Oscar party earlier this year. It has a little train, which I used to sweep the floors all night. 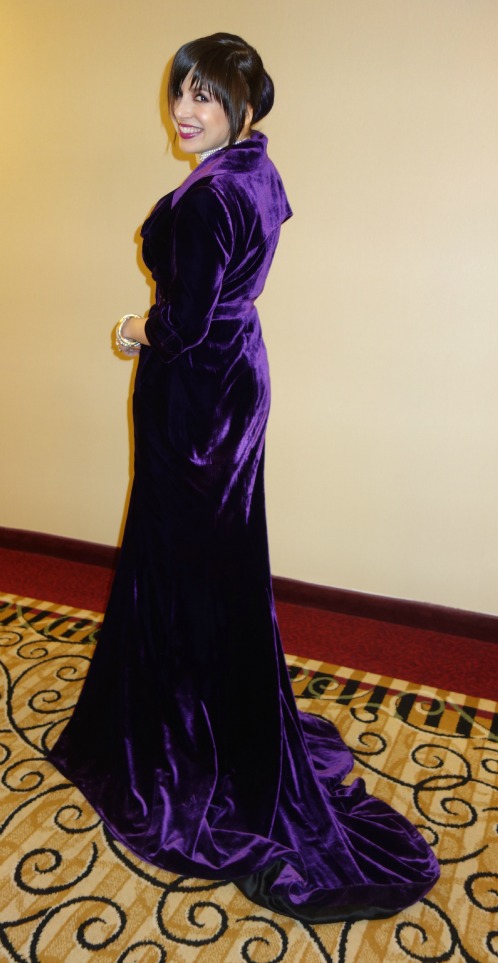 Here’s the look from the front. 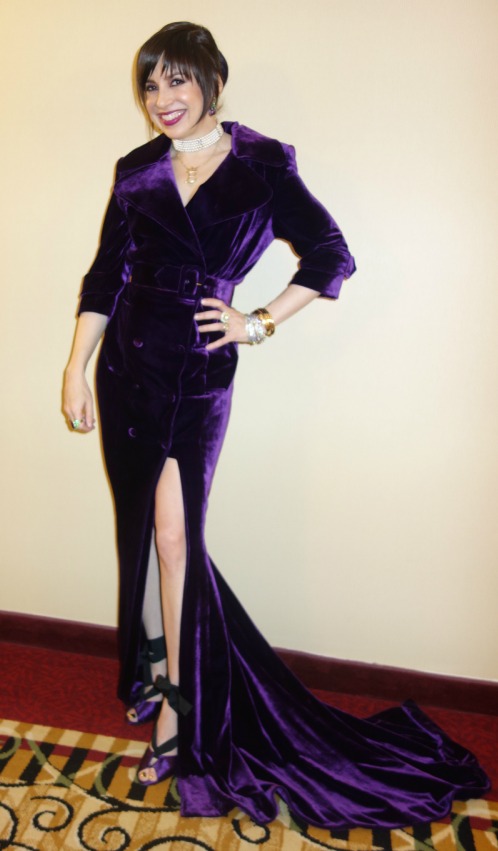 I thought I’d already worn this gown to the Committee to Protect Journalists International Freedom Awards last November, but I remembered incorrectly: It was another purple Zang Toi gown.  That means, technically, I could wear this dress to this year’s CPJ dinner, which takes place next week, but I might have to wait another year for this dress’s association with awkwardness fades. Oh, did I mention that I spilled everything out of my purse on the way into the venue last night, right at the feet of some stern-looking police officers? It could have been worse, I guess; at least I wasn’t accidentally carrying anything illicit. But still!

As for what MrB wore, the important things were the cufflinks made by me, of course, and his fabulous Pucci bow tie. Here we are standing in front of a green screen that put us on a New Republic cover. 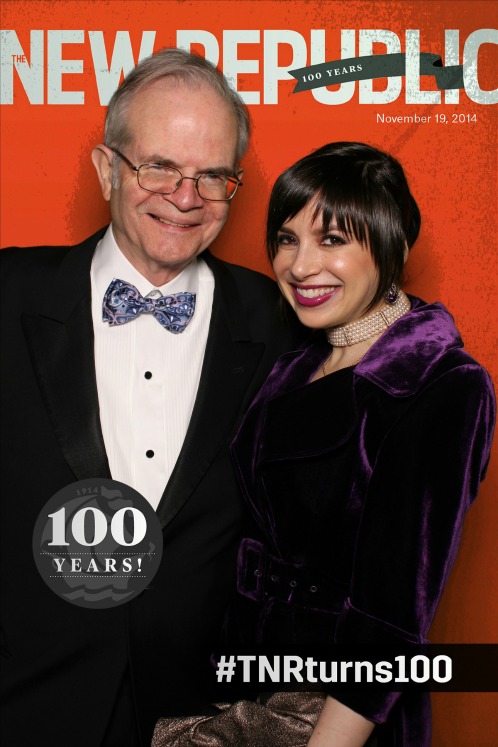 If you follow the journalism field at all, this story on the notorious fabricator Stephen Glass, published in the New Republic’s anniversary issue, is worthwhile reading.

You might also like
Recommended Reading and the Week in Review
What Wendy Wore: Platinum and Bricks at JCK Las Vegas
Throwback Thursday: Press Freedom Awards
Previous Post: « Where’s the Romance, Oxford Dictionaries?
Next Post: The Week in Review »