I’ve been thinking about canceling my longtime New York Times print subscription for months. With the exception of reporters Jodi Kantor and Megan Twohey — who broke the devastating and culturally significant Harvey Weinstein sex-abuse story — I’m disappointed in the newspaper I grew up with.

For a start, the Times stumbled when confronted with its own #MeToo moment. While White House reporter Glenn Thrush was suspended without pay in November after Vox reported instances of inappropriate behavior with younger women in the industry, he was able to rejoin the organization in January, albeit on a new beat.

Then there is the normalization of Nazis and other white supremacists. Dean Baquet — who became the executive editor of the Times after Jill Abramson was fired from the post in 2014 — said it was a “ridiculous overreaction” when readers criticized a story that portrayed a self-avowed Nazi as a polite Seinfeld fan. Along those lines, James Bennet’s op-ed page has become blatant clickbait, with reactionary contrarians represented as voices of reason even as they get their facts wrong. But before the op-ed page hired climate-change-denying columnist Bret Stephens last April — before #TimesUp (but not at the Times) and defensive Times reporters getting in spats on Twitter — there was the flawed coverage of the presidential campaign leading up to the 2016 election.

The Times coverage, like that at many other major news organizations, was gossip-driven, misogynistic, and damaging to our democracy. The organization over-reported Hillary Clinton’s (real) imperfections while treating Trump as a big-mouthed buffoon who was harmless because he was expected to lose, like a presidential version of tennis player Bobby Riggs facing off against Billie Jean King in 1973’s notorious Battle of the Sexes match. By focusing on Clinton’s use of a private email server and shrugging off Trump’s racist and sexist messaging and the way white voters all-too-eagerly echoed his hatred, the Times helped minimize Trump’s profound flaws — which, in addition to lifelong prejudice, include sexual abuse, scams, failed businesses, Russian connections, a history of shameless lying, and apparent unfamiliarity with the Constitution. As an in-depth analysis of the Times coverage published in the Columbia Journalism Review found, “… the various Clinton-related email scandals—her use of a private email server while secretary of state, as well as the DNC and John Podesta hacks—accounted for more sentences than all of Trump’s scandals combined (65,000 vs. 40,000) and more than twice as many as were devoted to all of her policy positions.” Put another way, in a six-day period right before the election (Oct. 29 to Nov. 3, 2016), the Times ran 10 front-page articles about the FBI’s investigation into Clinton’s emails. “In the same time period,” CJR reported, “there were six front-page articles on the dynamics of the campaign, one piece on Trump’s business, and zero on public policy of candidates.”

The one thing that’s kept me from canceling my subscription so far is — believe it or not — the obituaries. I’ve written before about the way having to physically turn the pages of an actual print paper reveals fascinating stories in a way that online self-selection and algorithms do not. I decided I could cope with missing the occasional sports story that matters to me, and even if I were less informed about international issues, that would make me a pretty run-of-the-mill American. But I’m finding it hard to quit the obits. It’s not only the big, feature obituaries about famous people that matter to me. I skim the smaller paid obituaries every day, a habit I developed in the 1980s as increasing numbers of very young men died of lymphoma, brain tumors, heart attacks, and other conditions that were all euphemisms for AIDS. There were periods during which the majority of obituaries seemed to be men 40 and under — an entire generation swept away. Now there are days where the majority of listings are for people in their 90s, and all of those people are intriguing to me in some way. For a couple of years, one of my most popular posts was one about a 90-year-old woman named Penny Courson. I spotted her beautiful face in a black-and-white photo, kept going, and then flipped back the pages for one more look, convinced she had been a well-known actress. Instead, I had found the mother of the late Pamela Courson, who had been the girlfriend and sole heir of Jim Morrison of the Doors when he died in Paris in 1971. What became of Pamela, and Morrison’s estate,  is worth reading.

The obits were the reason that I was still leafing through the pages of a print paper today, when I was struck by the use of white space in a full-page ad. Of course, I had to read the short list adrift in all that space, and this is what it was. 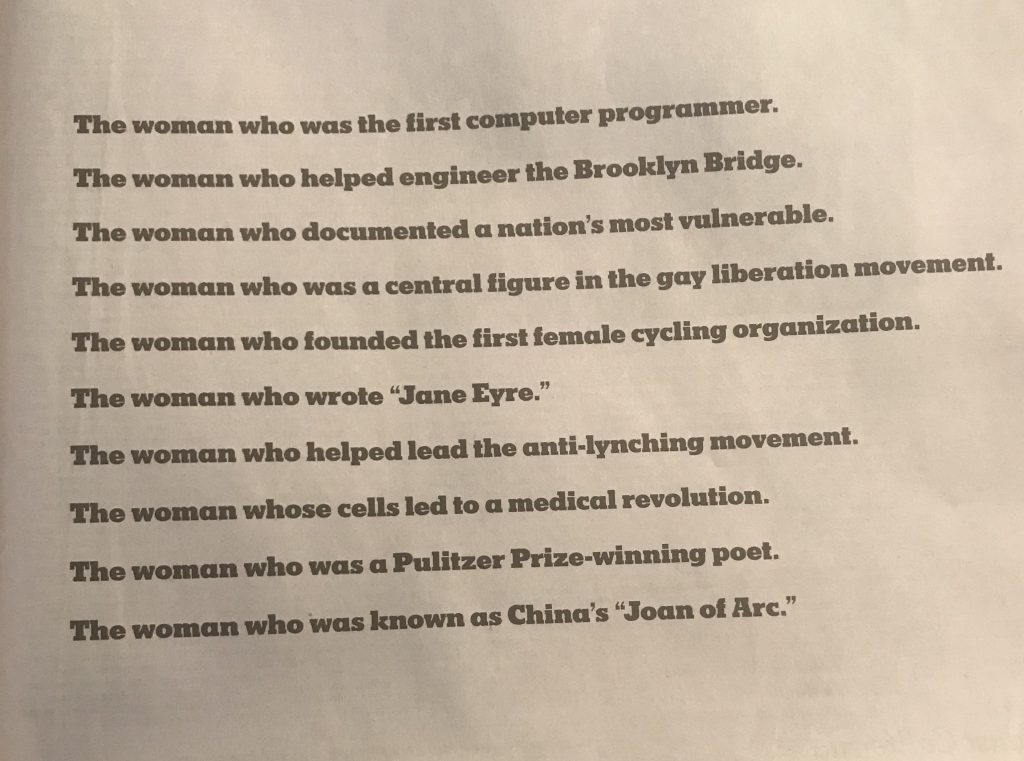 These are some of the notable women who were left out of the New York Times obituaries since the newspaper began publishing in 1851. They’re now, finally, being recognized an ongoing project called “Overlooked”, which launched today for International Women’s Day. The work was spearheaded by Amisha Padnani, the digital editor on the obituaries desk, and Jessica Bennett, the first gender editor at the Times. This is a high-profile project so, yes, I would have come across it online, but I doubt anything would have jolted me like that printed page did. I feel excited to read the life stories of so many important women, relieved to know that I’ll be able to find important obituaries no matter what, and vindicated by yet more proof that diversity in hiring pays off (it took two women to identify and remedy a 167-year-old hole in the coverage of what has long been known as “the paper of record”).  Finally, I feel heartbroken by the ways in which age-old biases against women, people of color, and other discriminated-against groups have distorted not only our understanding of history, but our crucial present-day decisions. It’s certainly time for a change.

To nominate someone for “Overlooked,” use this form.

So there’s a chance that in 166 years from now, the NYT will post an apology for their atrociously poor coverage of the first woman who won the popular vote for President. #internationalwomansday2018 https://t.co/6897vOprsA