These opals are available for earrings. I think they would look fab with some orange sapphire accents. #opals #customjewelry #earrings #birthstone #birthstonejewelry #opalearrings

On Instagram, my right-hand woman Eryn reminded y’all that we’ve got a Friday the 13th coming up, and I have the perfect hockey mask and chainsaw earrings for the occasion.

In non-jewelry-related reading, I recommend Ken Auletta’s 2002 New Yorker profile of movie producer Harvey Weinstein, which vividly documented Weinstein’s bullying behavior and ungovernable temper. (Note: Weinstein bought jewelry for his mother and daughters from me a few times about 10 years ago; his assistant handled the transactions. MrB and I also attended any number of Miramax/Weinstein Co. parties and movie screenings over the years.) Because of Auletta’s article and others like it, I always considered Weinstein to be an extreme example of the kind of abusive, narcissistic executive I’ve had a lot of exposure to, both personally and from a distance; it was a difference of degree, but not of kind. He wasn’t even the only over-the-top Boss-Zilla in Hollywood to be written about like that. But this week’s New York Times expose of Weinstein’s decades of sexual harassment of women, reported by Jodi Kantor and Megan Twohey, made me realize that someone with a massive ego and zero self-control wouldn’t necessarily confine his bad behavior to business hours, deal-making, and film-editing. The story also has me contemplating other work environments I either experienced or know a lot about. Was there more bad shit happening there than met the eye? I wouldn’t be surprised.

That said, Republicans and Russian bots can stop trying to make something out of the fact that Weinstein was a well-known donor to liberal causes. I see no progressives coming to Weinstein’s defense. He’s been fired from his namesake company and looks poised to suffer the downfall he richly deserves. (The bizarre statement Weinstein made in which he said he’d spend his newfound free time fighting the NRA made him sound delusional..) The GOP, in contrast, last year made an admitted sexual predator their president and continues to stand by that guy as he tries to goad North Korea into making the first strike in a nuclear war. Spare me the claims to self-righteousness. Besides, women have always known there are crappy, abusive men on both sides. This isn’t news to us. If it’s news to you, you’re a damn Onion story.

UPDATED TUESDAY, OCT. 10, 2017, TO ADD: The Weinstein news becomes ever more horrifying, with additional women finally emboldened to tell their stories. The New Yorker has published a new article by Ronan Farrow, who was doing his reporting on Weinstein at the same time the New York Times was working on its expose. Farrow’s piece includes women on the record describing sexual assault, and includes a link to a New York City police recording of Weinstein admitting to groping a woman in 2015.

Reactions from show-biz types who worked with Harvey have been trickling out and this Daily Beast interview with actor/director George Clooney was particularly interesting to me because it echoes my interpretation of the blind items I’d read for years about Weinstein:

“I’ve heard rumors, and the rumors in general started back in the ’90s, and they were that certain actresses had slept with Harvey to get a role. It seemed like a way to smear the actresses and demean them by saying that they didn’t get the jobs based on their talent, so I took those rumors with a grain of salt.”

Having long ago had my own experience with a “she slept with him to get the job” rumor in the workplace, I had always been skeptical of the gossip that implied a well-known actress had gotten a big role by having sex with Weinstein. That, to me, was the kind of thing a lot of people would say about a woman who was successful on any level. (And today actress Gretchen Mol has come out to slam the blind-item “facts” about her as just that type of misogynistic lie.) Weinstein’s 2015 groping of a young Italian model in New York was different. There was no third party with sour grapes about a Hollywood star. The victim wasn’t famous, and she went to the police immediately. Not only that, but the cops put a wire on her and captured the confession that’s embedded in Farrow’s New Yorker article. Nothing came of it. Weinstein wasn’t charged. I’m sure that was influenced by the smear campaign Weinstein managed to orchestrate — exactly the kind of public retaliation that other victims feared — that presented as a serial sexual blackmailer.

The Daily Beast’s Clooney interview also has a good question and answer about Weinstein’s long-documented bullying behavior of the non-sexual variety. 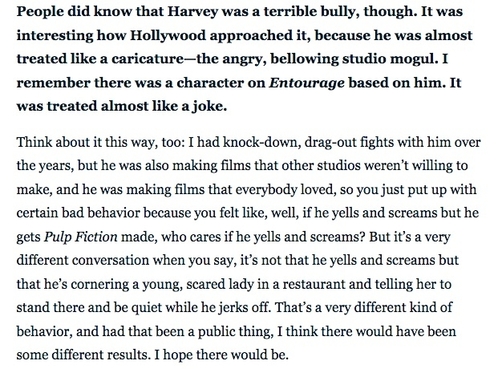 That nails my reaction to articles like Auletta’s 2002 piece and this 2011 Vanity Fair article, especially because, during my business-journalism days, a lot of over-the-top workplace bullies were given bad-ass nicknames and held up as examples of men who were tough enough to achieve exceptional success. One of them that sticks in my mind is Al Dunlap of Scott Paper and Sunbeam, who was known in the 1990s, approvingly, as “Chainsaw Al.” He even wrote a book called Mean Business: How I Save Bad Companies and Make Good Companies Great. Eventually, he was busted for inflating Sunbeam’s revenues by tens of millions, causing the company to go bankrupt. Much of his apparent success was fraudulent.

Among Hollywood types, producer Scott Rudin — who frequently battled with Weinstein over their movie projects — was the “Boss-Zilla” subject of a 2005 Wall Street Journal, but people still lined up to work for him. Five years after that article, Rudin charmed Stephen Galloway of The Hollywood Reporter for an article headlined, “The Most Feared Man in Town,” while admitting, “I was once a fairly angry person.” (That’s a total Weinstein move. Harvey often declared that he had, say, given up M&M’s and therefore “mellowed.”) The end of that story now reads like a prediction of Weinstein’s fate over the past few days. As Galloway wrote, “The very characteristics that have propelled Rudin to the top — anger, ferocity, obsessiveness — are the ones some executives fear. If he stumbles, who will come to his rescue?” He said Rudin was unperturbed, answering:

“People end amazing careers angry and bitter and feeling overlooked because they could not get their head around the idea that it was no longer their time,” he says. “The smartest thing you can know is when it’s over.”

That’s exactly what Weinstein didn’t know when he sent a desperate email begging for support from his Hollywood contacts, as reported yesterday by Janice Min, the part-owner of The Hollywood Reporter and its onetime top editor. No one came to his rescue; it is over for him. And I hope this is the beginning of the end of our tolerance for this kind of behavior in the workplace.

As for clothing designer Donna Karan, who broke from the general reaction of disgust and defended Weinstein by musing that women might dress in a way that is “asking for it” … WTF? This from a woman who designed sexy bodysuits and did a famous ad campaign called “In Women We Trust”, portraying her customers as both strong and sensual? Anyway, she departed her namesake company two years ago. Her new venture is called Urban Zen. If you’re sending her a strongly worded letter (or tweet), send it to the right place! Not that I’m encouraging anyone to pile on, because she’s already been hit hard by the backlash. I’d rather keep the focus on what the all-male board of the Weinstein Co. knew and when they knew it. By the way, Harvey’s brother Bob, who is taking over the company, has a reputation for being a bully himself.

You might also like
The Week in Review
Louis Vuitton Is Cancelled for Me
eBay Pick of the Day: Ossie Clark Sweater
Previous Post: « Jewels of the Month: Your Own Opal Designs
Next Post: October’s Other Birthstone: Tourmaline »