In case you missed it, here’s what was on the blog recently.

Going back to my “Grammys suck” post, I was excited to see that Fiona Apple is among the many women who share my feelings about the Recording Academy’s president, Neil Portnow (that’s the guy who said women would do better in the music industry if they would just “step up”). It’s a little hard to see in this video screencap, but Fiona wore a “Kneel Portnow” t-shirt during a guest appearance with Garbage’s Shirley Manson at the Girlschool L.A. festival earlier this month. Ha! 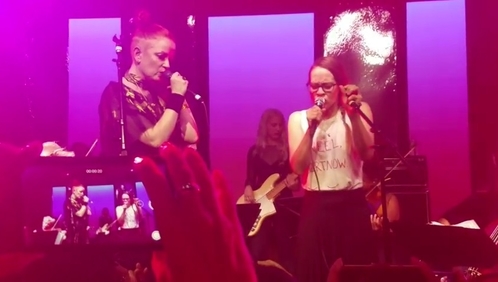 I found out about this belatedly from a great Huffington Post interview with Manson by Noah Michelson. I love that Shirley tells it like it is about everything she’s asked. As for Portnow, she said:

Manson, along with Girlschool artistic collective founder Anna Bulbrook, did another outspoken interview with Yahoo! that’s also worth reading.