MrB and I are celebrating our 20th date-a-versary today. That means that on this day in 1998, he and I started … um … “going steady”? “Became an item”? I’m not sure how to word it in a way that doesn’t make y’all feel like …

It wasn’t our first social outing together. In fact, it was supposed to be our last. MrB, who had recently found himself single, had wined and dined me a couple of times. He even took me to the ballet, because he was quite sure that all ladies loved the ballet. (I appreciate dance much more now than I did then.) I thought MrB was a nice guy, but I was 30 and he was 55. Also, from 1992 to 1995, MrB had been my boss’s boss at the Wall Street Journal, and, even though by 1998, I’d been at CNN for three years, that past professional relationship made me like …

At some point, I sent him a rejection letter — handwritten on paper — that said I “respected him as a journalist,” but MrB, being an ultra-optimistic guy, didn’t notice the rejection part. I decided to treat him to dinner to clarify his status while “paying him back” for ballet-ticket expenses and whatnot. You know how it is with a lot of men who aren’t MrB (#NotAllMen, duh, but a helluva lot of men): Once they’ve spent money on you, they think you “owe” them. I always liked to be sure I didn’t have an outstanding tab. The only problem with my scheme was that when MrB came to pick me up, he cleverly befriended my beloved rescue dog Mr. Chubbs. Mr. Chubbs’s happiness was very important to me, so, eventually, I had to marry his new friend. It did take a while: MrB and I didn’t move in together until 2000, and we didn’t get married until 2001. Of course, when we did finally get hitched, Mr. Chubbs was there. 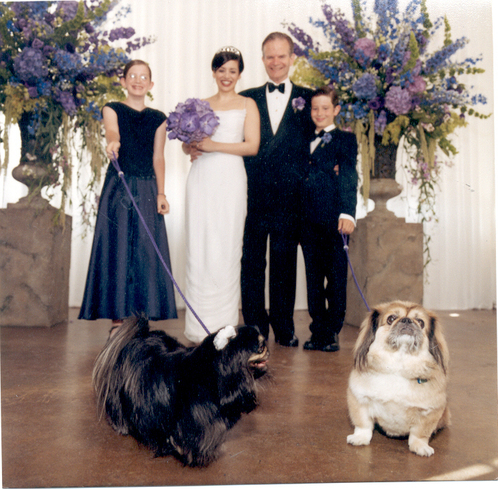 Mr. Chubbs (right) and my parents’ dog, Molly, were honored guests at our wedding.

The photo below from later in 1998 — not the actual date-a-versary, but it’s close enough.

Together TWENTY YEARS as of … today. #timeflies #couples #theysaiditwouldntlast

Sorry for confusing peeps on Instagram with my caption for this picture. A few people thought my saying we were “together” meant we were married 20 years, but our 20th wedding anniversary is July 22, 2021. You don’t need to rush out and buy us any china right now.

I seem to have misplaced the letter of rejection that MrB mistook for a letter of encouragement, but I do have the note MrB sent me on Feb. 21, 1998, thanking me for his first-ever delivery from Amazon. MrB still writes very detailed, gracious thank you notes but he sends them by email now.