I am feeling guilty that I have posted many pictures of my dogs Henry and Gigi without posting a picture of my first Pekingese, Mr. Chubbs. 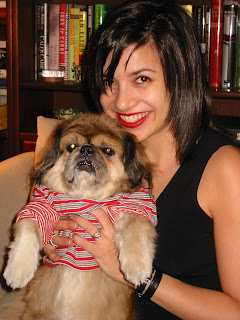 This is me holding Mr. Chubbs in 2003. The t-shirt is not a fashion statement. He had allergies and kept scratching himself, so I put a t-shirt on him to protect his skin.

I got Chubbs in 1996 from a city pound when he was around 5 or 6 years old. He was a great friend and, as you can see, an excellent sleeper. 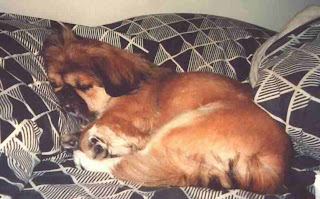 What a handsome fellow! 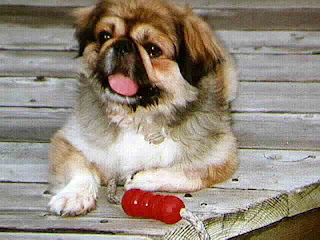 Mr. Chubbs had to be put down on May 31, 2006, at an advanced age due to a neurological disease. Since I’m a memento-mori-loving person who appreciates Victorian post-mortem photography, I naturally took pictures immediately before and after. (Don’t worry, I’m not going to share them.) My mother saw these pictures and that resulted in the following conversation.

Mom: You better not take pictures of me when I’m dead.
WendyB: Okay, I won’t
Mom: Promise you won’t.
WendyB: (smiling) I promise.
Mom: Oh my God! She’s going to take pictures! 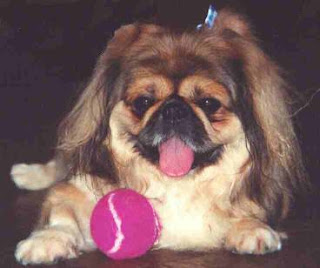 Matching your toys to your tongue is very chic.

My husband had a particularly close relationship with Chubbs. Back in 1998, I was seeing this guy who was my age. Nothing was really happening with him, in part because he kept calling Chubbs a “kick dog.” Obviously he didn’t kick Chubbs, but the teasing annoyed me. At the same time, the much older guy who is now my husband was trying to woo me with tickets to the ballet (not effective) and fancy dinners (more effective). Valentine’s Day came around and Younger Guy came to take me out. Chubbs had just been to the beauty parlor and when he ran out to greet Younger Guy, YG said, “You’ve humiliated your kick dog by putting ribbons on him.” Grrrr. The next night, my now-husband came to take me out. When he saw Chubbs, he started to smile but then he knelt down, solemnly shook the dog’s paw and said, “Mr. Chubbs, you look very debonair tonight.”

And that, my friends, is what led to Mr. Chubbs’s stroll down the aisle at our wedding in 2001. 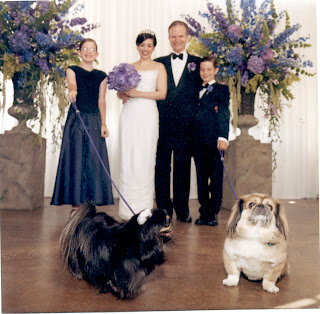 *”Let his loyalty and devotion be a lesson to us all.” Inscribed on the gravestone of Greyfriars Bobby.