The 1980s were a decade of DayGlo, and I’ve never lost my love for neon colors. 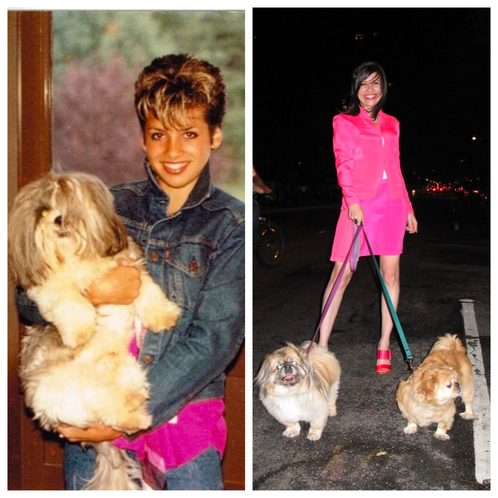 Those hot ’80s hues were inspired by 1960s fashions. I spoke about that with some experts when I wrote about neon for the Huffington Post in 2012:

“Ingrid Johnson, professor of textile development and marketing at the Fashion Institute of Technology, says a vivid orange-red that was a signature color of designer André Courrèges in the 1960s was a predecessor of the DayGlo colors that the influential late designer Stephen Sprouse used in the ’80s. Paul Cavaco, [then] creative director of Allure magazine, helped launch Sprouse’s signature line. He says Sprouse custom-ordered fine Italian fabrics in fluorescent colors previously seen in ’60s psychedelic posters and ’70s punk hairstyles. ‘He made [neon] part of the vocabulary of fashion.’ Cavaco says.”

Another 1960s trend that I enjoy — and that’s come around before — is clothing that lights up. I wrote about electrifying ’60s designer Diana Dew in 2010 after singer Katy Perry wore a multicolor CuteCircuit gown to the Costume Institute Gala at the Metropolitan Museum of Art.

So I’m totally here for the light-up, DayGlo finale of Saint Laurent’s fall 2019 show in Paris this week, for which creative director Anthony Vaccarello went full-on ’80s. Neon shoes? Sign me up!

As I like to say, fashion repeats itself — but I’m totally okay with my old favorite being another generation’s fresh new thing, because fuck that “if you’re old enough to have worn it the first time …” rule. I’ll wear what I want, and what I want is to be seen in the dark! Time to add to my neon collection.