There was some enlightening reading in the New York Times this weekend. If you missed it, check out the cover story of the New York Times Magazine: “Our Feel-Good War on Breast Cancer,” by Peggy Orenstein, about how “awareness” (including mammograms and all kinds of pink shit sold in October) hasn’t decreased breast-cancer deaths. I’ve been brooding over this issue ever since the mid-’90s, when a relative underwent a lumpectomy and radiation for a tiny Stage 0/1 cancer.  That was considered “early detection” — the cancer was found while it was small and easily treatable. But was it ever going to get bigger? I wondered why no one was working on a test to show if such a tumor would indeed spread if left alone. Maybe it would have sat there quietly forever, no more threatening than a pimple.

“Many … women are told they have something called ductal carcinoma in situ (D.C.I.S.), or ‘Stage Zero’ cancer, in which abnormal cells are found in the lining of the milk-producing ducts. Before universal screening, D.C.I.S. was rare. Now D.C.I.S. and the less common lobular carcinoma in situ account for about a quarter of new breast-cancer cases — some 60,000 a year. In situ cancers are more prevalent among women in their 40s. By 2020, according to the National Institutes of Health’s estimate, more than one million American women will be living with a D.C.I.S. diagnosis.

“D.C.I.S. survivors are celebrated at pink-ribbon events as triumphs of early detection: theirs was an easily treatable disease with a nearly 100 percent 10-year survival rate. The thing is, in most cases (estimates vary widely between 50 and 80 percent) D.C.I.S. will stay right where it is — ‘in situ’ means ‘in place.’ Unless it develops into invasive cancer, D.C.I.S. lacks the capacity to spread beyond the breast, so it will not become lethal. Autopsies have shown that as many as 14 percent of women who died of something other than breast cancer unknowingly had D.C.I.S.”

As Orenstein points out, because there is STILL no way to determine which D.C.I.S. will spread, all of them are treated as life-threatening emergencies.  She quotes Laura Esserman, director of the Carol Franc Buck Breast Care Center at the University of California, San Francisco, who is lobbying to take the “carcinoma” out of the name of  D.C.I.S. “D.C.I.S. is not cancer,” she told Orenstein. “It’s a risk factor. For many D.C.I.S. lesions, there is only a 5 percent chance of invasive cancer developing over 10 years. That’s like the average risk of a 62-year-old. We don’t do heart surgery when someone comes in with high cholesterol. What are we doing to these people?”

In addition to my 50-something relative with the small tumor, I know many more breast-cancer survivors. One friend had multiple small tumors in one breast in her 40s, resulting in successful lumpectomy, radiation and chemotherapy. Meanwhile, a colleague was first diagnosed with cancer in her 30s, and died 16 years later, in her early 50s, after numerous rounds of treatment (meaning she would have been a success story according to the stats that focus on how people are doing 10 years after diagnosis). The three examples strike me as very different versions of the disease, yet there was no true personalization of treatment. The only difference was a matter of degree, not kind.  The bigger/more numerous the tumors, the more standard stuff  — operations, radiation, chemo — they throw at you. As Orenstein points out, we know there are “at least four genetically distinct breast cancers. They may have different causes and definitely respond differently to treatment.” I bet there are more than that.

(By the way, the acquaintance who died was considered terminally ill from cancer, but she didn’t die from the cancer. She died from cardiac arrest from a blood transfusion intended to give her some more strength. A couple of years later, I was reading studies about how transfusions can lead to heart attacks.)

On a lighter note, the New York Times previewed the Metropolitan Museum’s Costume Institute’s new exhibition “Punk: Chaos to Couture.”  (Humph. Once again, my invitation to the opening of the exhibit at the celebrity-filled Costume Institute Gala seems to have been lost in the mail. ) Melena Ryzik interviewed some of the original punks about their fashion choices and the idea of the exhibit, including Legs McNeil, the co-author with Gillian McCain of 1997’s Please Kill Me: The Uncensored Oral History of Punk:

“‘Getting these high-fashion designers, what does that have to do with punk?’ said Legs McNeil, who was a founder of Punk magazine in 1975. ‘So rich people could go slumming? Come on, give me a break.’

“It’s a ‘masturbatory fantasy for Anna Wintour and Vogue,’ he added. ‘They always go and try to co-opt what they can’t own. They try to co-opt authenticity and turn it into something boring.'”

High!Larious! Gotta love a anti-establishment quote from a real punk. And thanks to the article, I have a treat for the many people who come to my blog looking for information on the late Anya Phillips, a friend of Debbie Harry’s and a co-founder of New York’s Mudd Club. Here’s a photo of Debbie and Anya that I haven’t posted before.

It’s also cool to know that many of the vintage t-shirts on display come from the collection of Adam Ant.  That’s the only way I would believe they’re authentic. As the Times pointed out:

“But because very few people preserved their holey tops and fraying jeans — sweating and shredding through them was, of course, a badge of honor — the garments on display are mostly from the couture side, pricey ensembles inspired by, or sometimes direct rip-offs of, outfits worn by the emerging counterculture in New York and London from 1974 to 1979.”

Finally, I’ve been reading both the Times and the Wall Street Journal in print and online for updates on the horrific Bangladesh garment-factory collapse that has killed 362 people, according to the official count. Bangladeshi authorities are arresting engineers and factory owners linked to the building, while a survivor who was extracted from the rubble told the Journal, “It was like being in a grave.” Cracks had appeared in the building the day before the collapse, causing an evacuation and giving fair warning of serious trouble, but the workers were ordered back the following day and disaster struck. The Journal notes that:

Just something to keep in mind while you consider buying a $5 t-shirt or a $15 dress at a fast-fashion chain or discount retailer. A designer here in New York City wouldn’t even be able to buy the fabric for those prices, let alone do the labor. There’s got to be some way to save all that money, right?

Speaking of cheap stuff, thanks go out to a reader named Denise who alerted me to this bargain acorn-and-squirrel necklace on a website that won’t be named. 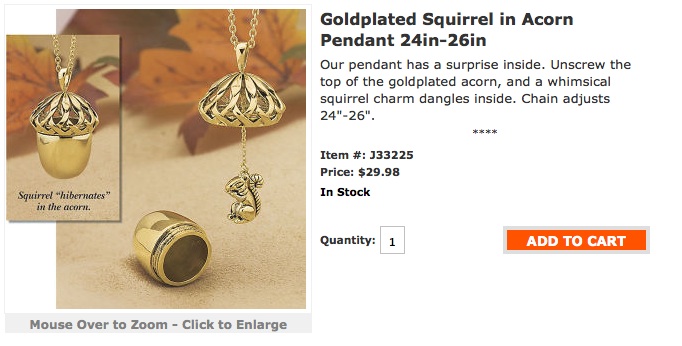 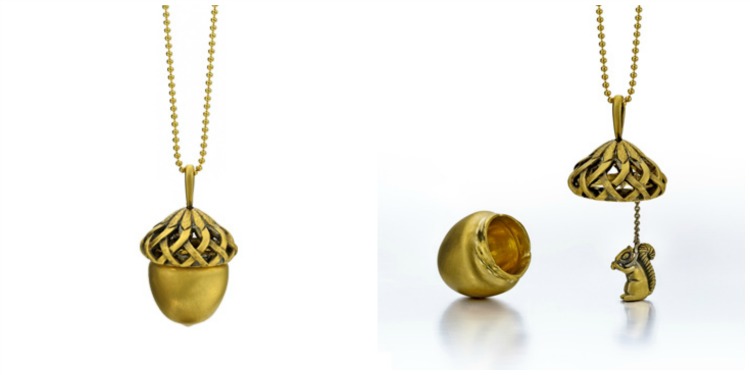 Obviously, a person on a budget can’t afford my $16,000 piece of art, but COME ON! Couldn’t they change a FEW details instead of copying it so exactly? Even the squirrel’s eye shape is the same. More significantly, I usually don’t see the exact design of my “open weave” acorn cap on any of the zillions of acorn — and acorn and squirrel — designs out there.  (As I noted when I introduced this piece in 2008, acorns are a long-running theme in jewelry, and not unique to me; in fact, my design was inspired by Victorian hair jewelry.) This probably originated at a Chinese factory. They’re not too creative in those Chinese factories, you know. They make what they see. I’ve heard stories of apparel designers who have accidentally sent a sample that had, say, a cigarette-burn hole in it. What do they get back? A garment with a built-in cigarette-burn hole. Hmmm. That might explain how pre-distressed jeans became so popular. If a pair of jeans got ripped on the way to the factory, the designer would be stuck with 10,000 pairs of identically ripped jeans. The logical solution: “I better tell people this is a trend … wait, it’s a tribute to PUNK! Yeah, that’s it.”

Anyway, I’m mildly amused that certain of my jewelry designs — ones that barely got a second glance from 22-year-old assistant magazine editors here  — are so frequently copied. Could it be that the overseas factories have better taste than the 22-year-olds in New York? When is a fast-fashion chain going to ask me to collaborate so I can knock myself off instead of seeing other people do it? Well, I’ll look at the bright side to that: At least I don’t have to stress out over the working conditions in the fast-fashion factory.

Here’s what was on the blog this week. Add this to your reading assignments!

UPDATED APRIL 29, 2013, TO ADD: After being contacted, the website in question was very gracious about removing the design. Still dealing with the factory that produced the piece, which is in the U.S., to my surprise!

You might also like
The Weeks in Review
Last Call for Holiday Jewelry, Plus the Week in Review
The Blog Week in Review
Previous Post: « Customer of the Day: Susan of Une Femme d’un Certain Age
Next Post: I’m Not Worthy! »