Click through the three slides below to see the first styles: asymmetric dangle earrings, single stud earrings, and a necklace — all created with glowing pink spinel and electrifying green garnet.

As you may recall from earlier posts, ANZA Gems was founded by my friend Monica Stephenson (aka jewelry blogger iDazzle) in 2014. Through ANZA — a word that means “begin” in Swahili — Monica offers a transparent journey from the gem mine to the customer. She personally sources ethically mined, colored-gemstone rough from Tanzania and Kenya; brings the uncut stones back to the U.S. to be faceted by gem cutters here; and then has them incorporated into fine jewelry by designers with whom she collaborates. At least 10% of the proceeds from every sale goes back to schools in the gem-mining districts. 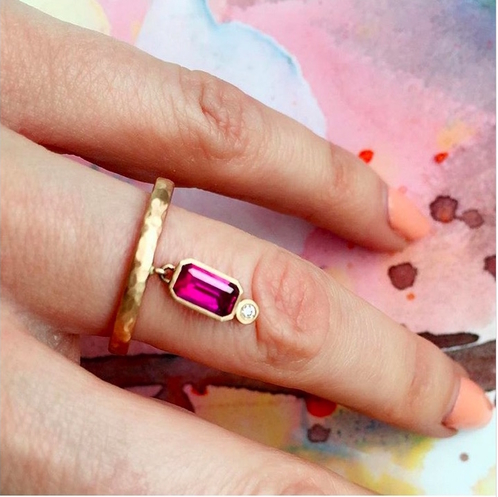 This one is sold, but you can click the photo to read about it.

… as well as a prize-winning double-finger ring and a tourmaline toi et moi two-stone ring (left and right respectively in the photo below. Unfortunately, I can’t claim that big diamond!)

I adore the fancy shapes of Monica’s finished gems. Most of the ones I’ve worked with so far have been faceted by gem-cutting geniuses Peter Torraca, who did all three stones in the prize-winning ring, as well as the green tourmaline in the toi et moi; and Beth Stier, who cut the golden tourmaline in the toi et moi. That said, in September, when Monica showed me some packages of smaller rough pieces that she felt would be too labor-intensive to cut, I said, “Let me take these as is.” I couldn’t get over the vivid color of these stones — untreated, straight out of the ground.

I said, “Monica, I’m going to do a whole mix-and-match collection for you with rough, and even though it’s going to be made in the USA in 18K yellow gold, we’re going to have options under $500.” Monica said, “We’ll call it ANZA PURE” in tribute to the natural colors of the rough gemstones.

Then she asked, “How are you going to get someone to set all of these?” There were more than 20 potentially usable gems in the packages. Because rough is by definition irregularly shaped and sized, there’s no simple way to do mass production. New York goldsmiths can make much more money per hour working on a single $500,000 design than on 100 $500 designs. “I’ll find someone,” I said, and as you can see, I did find someone (after a couple of rejections). It took a little bit of time to generate the required enthusiasm with the eventually willing artisan. I had to explain ANZA’s mission, share my vision of a broad collection, and negotiate the terms of working in quantity … but here we are!

This is the first part of the collection. Additional necklace and earring styles will debut in the new year. Those will be more elaborate, meaning the designs I’m showing today are the most accessible part of the collection with studs starting at $345. These designs are so new they aren’t on the ANZA website yet, but if you’re interested, contact ANZA Gems directly to inquire. Each piece of rough is one of a kind, so if there’s a particular gem that appeals to you, get it before it’s gone.

Remember that, with your purchase, you’ll be giving back to educational efforts in the gem-mining communities, like the Kitarini school in Tanzania, which Monica recently visited during lunchtime. As Monica says in her caption for the slideshow below: “Why is a simple lunch of maize and beans remarkable? Because the lunch program was discontinued for a couple of years and these kids, many of whom walk 5-9 kilometers each way, were hungry, test scores slipping, attendance dwindling. A few generous people in our own industry help provide the funds to feed 498 kids every school day.”

Scenes from a Tanzanian school. Hard to believe just a couple of weeks ago I was a world away at the Kitarini School, visiting with about 500 Maasai school kids and teachers, and witnessing the rather remarkable event of lunch. Why is a simple lunch of maize and beans remarkable? Because the lunch program was discontinued for a couple of years and these kids, many of whom walk 5-9 kilometers each way, were hungry, test scores slipping, attendance dwindling. A few generous people in our own industry help provide the funds to feed 498 kids every school day. The last photo says it all: my heart is still in East Africa. Grateful to @rogerdery and Ginger, Nancy Schuring of @devonjewelry and #devonfoundation and other retailers and people who help feed the kids. #tanzania #tanzanianschool #maasai #maasaischool #schoolkids #classroom #hotlunch #beautifulfaces #kitarinischool #eastafrica #gemsforchange #gems #roadlesstraveled #liveincolor #moyo

My ambitions now include someday designing with zircon mined by these women.

Happy #miningmonday! These women mined these zircon. It's so humbling to visit mines and mining villages on our travels to East Africa. We're in constant awe of the hard work these women and men put in day in and day out. That's why we are celebrating #miningmonday instead of #cybermonday today. We want to be able to donate as much as possible to support these communities. #gemsforchange #giveback #giftsthatgiveback #dogood #gemstones #roughgems #gemstonemining #zircon #tanzania #kenya #womenwhorock #girlpower #anzagems #anzatravels #teamanza

I was so psyched to see those female miners with their own product. Much of what we buy now — whether electronics, cars, clothes, jewelry, or food — travels a long way to get to us through a chain of custody that we know nothing about. It seems anonymous, which, I’ve observed, makes it easy for consumers to imagine that a lot of tasks are done by uncomplaining, unpaid robots. The robots, however, haven’t replaced us humans quite yet, and there are real people hard at work. (I don’t blame people for having that impression, because I only became fully cognizant of each step when I started manufacturing. Until you have the personal experience, it truly is difficult to understand how much human contact there is during production.) So, hopefully, I’ll get to “meet” — at least by photo — the miner(s) of gems I use in my work. Or maybe I’ll meet them in person because I’m begging Monica to take me on one of her gem-buying trips. 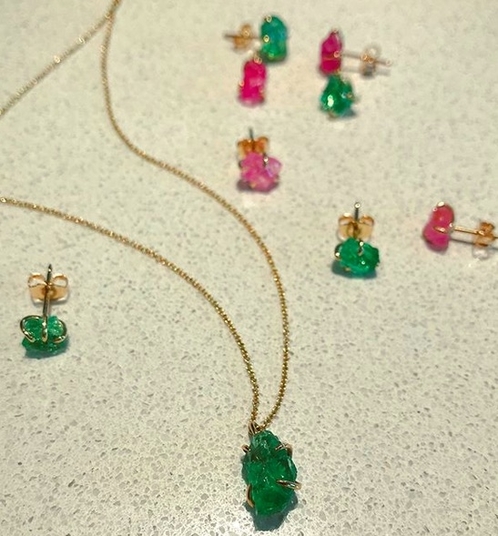 Anyway, I encourage you to get in touch with ANZA Gems and treat yourself or someone you love … or both … to a beautiful piece from the new ANZA PURE collection. A heads-up to folks with January birthdays: Garnet is your birthstone!

You might also like
Who Said "If You Have to Ask the Price, You Can't Afford It"?
Seattle Jewelry Lovers: Get Your Invitation!
Introducing Moko
Previous Post: « Wednesday’s Video: Revisiting My 15 Minutes of Fame
Next Post: Wendy Brandes Jewelry in the Press »