The television folks at the Emmy Awards don’t always give great red carpet, but tonight’s 2016 event impressed me.

First of all, Kristen Bell’s Zuhair Murad was one of the most beautiful gowns I’ve seen in a long time.

I would wear that in a hot second!

Paulson won for Outstanding Lead Actress in a Limited Series or Movie for her role as Marcia Clark in The People v. O.J. Simpson: American Crime Story. She also won best-accessorized of the night for bringing the real Marcia Clark as her date.

As for color, the trend for marigold that was on display at the 2016 Golden Globes has evolved into a less-orange-y yellow.

Angela Bassett looked as fierce as ever in a Christian Siriano gown. Love the statement sleeves.

Taraji P. Henson was stunning in a bright Vera Wang. That said, it was Taraji’s beauty plus the electric color of the dress that made the look, rather than the design of the dress.

Vera Wang did Michelle Williams’s 2006 marigold Oscar dress, and you can see how much more was going on design-wise with that one was here.

… while Ellie Kemper wore a Jenny Packham dress with beading that gave it a vintage vibe.

A big shoutout to 12-year-old Caleb McLaughlin of Stranger Things for the snazzy look he credited to his personal stylist. Caleb is the one in the middle below. The other kids look good too!

I considered nearly all of the people above for my coveted Best Dressed/Wear What You Want combo award. But, as the second half of the name indicates, this award celebrates more than a beautiful dress or impeccable style. Eye-catching, challenging, shocking — those are all qualities I applaud too. But sometimes it’s just about being FIERCE, and no one does FIERCE like Judith Light. Judith serves looks for days when she hits the red carpet. I’ve commented on her before, but I’ve never given her the top honor. She’s due, and not in the way the Academy Awards decided Leonardo DiCaprio was due for an Oscar for The Revenant. What I mean by that is that Judith actually deserves my Best Dressed/Wear What You Want award for the 2016 Emmys. Pose, Judith! Pose for your life!

I always have trouble finding information on what Judith wore. Why is that? Is it because she’s 67 years old and not an ingenue? Also, why isn’t she my friend? These questions need answers, dammit.

I brought up Leonardo DiCaprio and The Revenant because I finally watched it last night with my designing friend Stacy Lomman. We thought it was dreadful — though beautifully shot — but at least we laughed our asses off. I mean, a female grizzly bear (which can weigh 800 pounds) attacks Leo’s character three times, STANDS ON HIS HEAD, and then lands with her full, dead weight on him. Can someone survive a bear attack of that severity? It’s possible. But will that person’s pretty face be virtually unscathed? DOUBT IT. Yeah, Leo had bad body wounds and one of his feet looked like it had been rotated 180 degrees, but he had about three scrapes on his face. During his long and mostly speechless trudge back to quasi-civilization, his foot miraculously heals and he survives all that exposure to freezing water with ease. When he survives riding his horse off a cliff and into a giant tree, Stacy and I were literally crying from laughing so hard. (Also, cutting the dead horse open is sooooo Empire Strikes Back. And Family Guy.)

I kept saying, “Wow, white men can totally poop something out and get an award for it.” 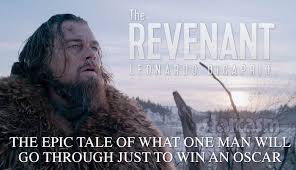 Oh, but Leo’s character is a GOOD white guy because his son is half-Pawnee, and he speaks to the son in his Native language, and we keep seeing Leo’s dead Pawnee wife in Gladiator-style flashbacks. I will give the movie credit for casting actual Native Americans in the Native American roles, but they were all so mystical … so magical! Not like real people at all. But then there is a lot of magic in this movie, ranging from unkillable Leo to those single-shot guns that shoot more than once.

The funniest thing of all wasn’t on the screen. It was the fact that we paid for The Revenant on demand at the same time it was airing for free on HBO! Jebus!

Anyway, here’s one more photo of Judith Light, rightfully winning the red carpet at the Emmys. I dig the tousled hair.

See that pinky ring? She got extra points for that.

UPDATED TO ADD: Thank you to my commenter for pointing out that Judith’s dress was designed by Alexandra Vidal. That helped lead me to Judith’s Instagram naming her glam squad.

Many thanks to my team Alexandra Vidal, Jack Yeaton, Matt Fugate, Elaine Offers & Anthony Luciano for this look tonight. So grateful!

You might also like
Just a placeholder
Thursday Book Club: Inspired by Poland
London, Day 4: Henry VIII and Hamlet
Previous Post: « 10 Years Ago: MrB at the Emmys
Next Post: 10 Years Ago Today: CPJ Honors Walter Cronkite »