The Emmys are on tonight. Normally, on Emmy night, I like to show off MrB’s Emmy. 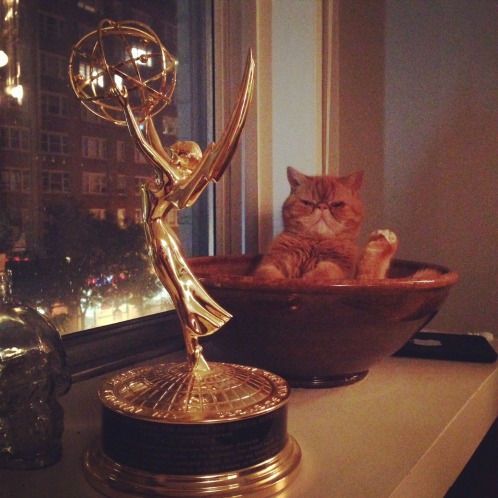 But I don’t think I’ve ever shared this photo of MrB holding his Emmy in 2006.

MrB received the Lifetime Achievement Award in Business & Financial Reporting from the National Academy of Television Arts & Sciences that year. At the time, he was managing editor of the Wall Street Journal, overseeing U.S. and international print and online editions. He didn’t have much to do with television at all, so we were a little puzzled by the award, but when someone offers you an Emmy, you take it!

I was there with terrible hair. 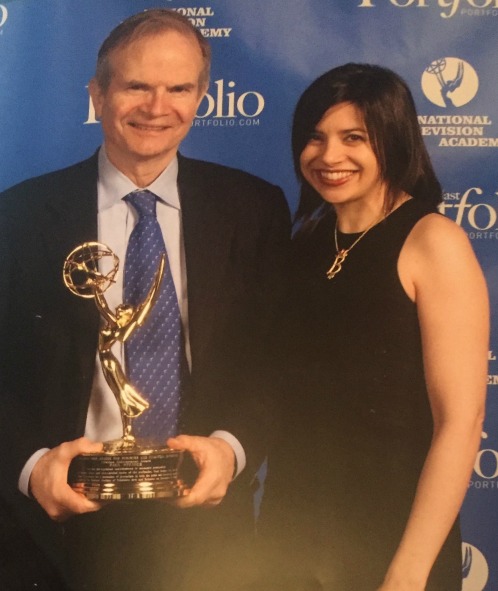 My hair is so straight and rectangular! I suspect I had chemically straightened my hair shortly before this event and was in that period of time when it couldn’t be washed.

The business Emmys — which were only in their fourth year — took place in December in 2006, months after the regular Emmys, so we didn’t get prance down the red carpet with a bunch of actors people and have our moment on television. MrB had his picture on the outside of the Nasdaq building though! 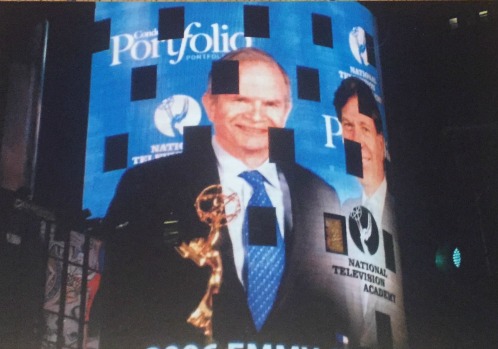 I’m not sure whether the Business & Financial Reporting Emmy still exists. I’m having trouble finding anything about it after 2009. However, I did find this spectacular photo of MrB and Eliot Spitzer from the first ceremony in 2003.

Eliot Spitzer became the governor of New York in 2007, but he resigned the next year amidst a prostitution scandal. In 2003, he was New York’s attorney general. In that role, he was very into pursuing Wall Street and other white-collar crime, which explains his presence at that 2003 event. I’m pretty sure I skipped that dinner, which was for the best, because Eliot always annoyed me!

You might also like
Throwback Thursday: CPJ Outfits From 2007-2017
In Concert in NYC: Anya Marina, Tristan Prettyman and Pink
David Bowie's 1976 Playboy Interview and Other Links
Previous Post: « Back to Work!
Next Post: My Best Dressed at the 2016 Emmy Awards Is … »