Gimme Shelter by the Rolling Stones has been stuck in my head for days.

I know it’s no Dude Looks Like a Lady, but it’s still a great song. It also reminded me of Mick Jagger’s jumpsuit collaboration with my favorite vintage designer, Ossie Clark. I’ve mentioned that Mick wore Ossie clothes but never posted any pictures, so here’s Mick in an Ossie jumpsuit on the cover of Life. 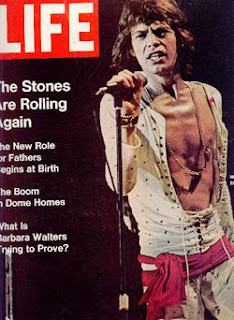 Photo from The Look

Child of the Moon has more photos of Mick in Ossie jumpsuits here. (Mick reminisced about a jumpsuit in this 1996 article on Ossie’s death.)

Ossie himself was very sex-ay. I think this photo of Ossie and designer Alice Pollock is the hottest picture evah of a designing duo. 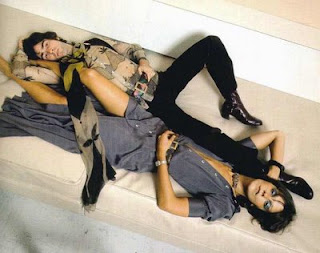 Ossie is wearing one of his own chiffon shirts.
Photo from Child of the Moon

I also love David Bailey’s photo of Ossie with model Chrissy Shrimpton. Most guys couldn’t get away with striking that pose, but it works. 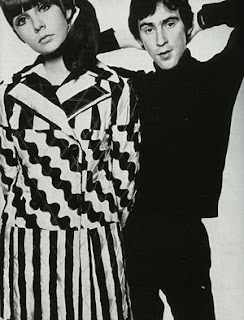 Photo via Cathy of California
You might also like
2018 Met Gala: The Best of the Rest
Get Crazy With Christina Castle & Gangsta Boo
What Wendy Wore: Ceil Chapman at La MaMa
Previous Post: « Dyslexic Search Term of the Day
Next Post: Ossie Clark Sweaters »