Between Hurricane Sandy and work, I didn’t get around to making Halloween plans. I had a great costume in mind too. My favorite part about dressing up is the hair and makeup, so I’m definitely not going to stick a pair of cat ears on my head, draw on some eyeliner whiskers and call it a night. I go hard or stay home. 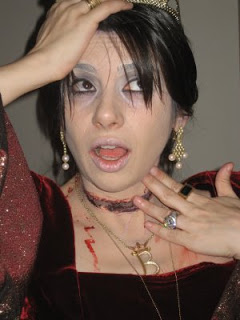 When dressing as post-mortem Anne Boleyn in 2008, I was “dead” set on perfecting my neck gash.

Luckily, I’m going to see Lady Gaga in concert again in February, and she’s a good excuse to get wild. 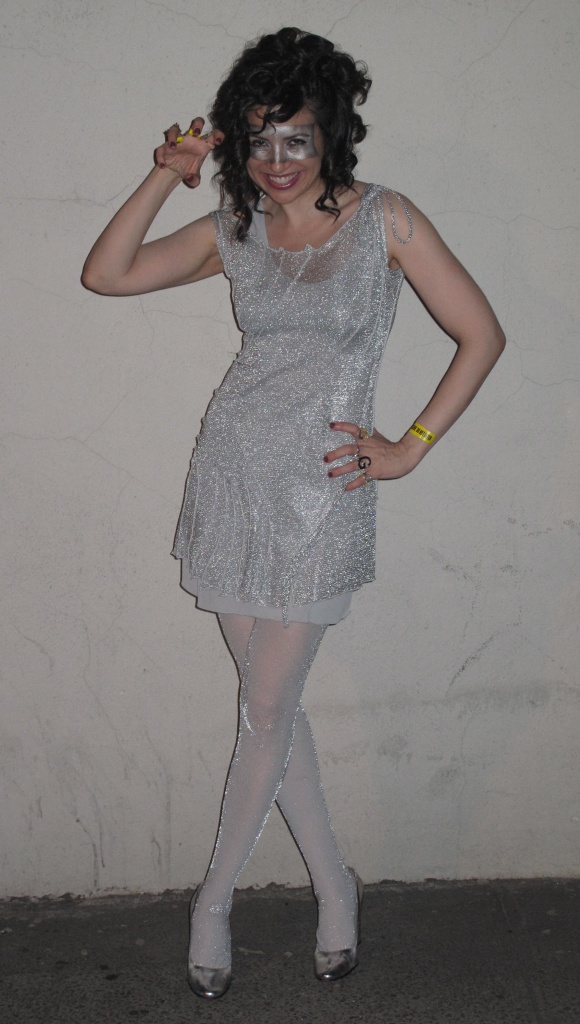 I’m comforted by the fact that two years ago, I got to live out one of my Halloween costume dreams by dressing as ’80s pop star Adam Ant. 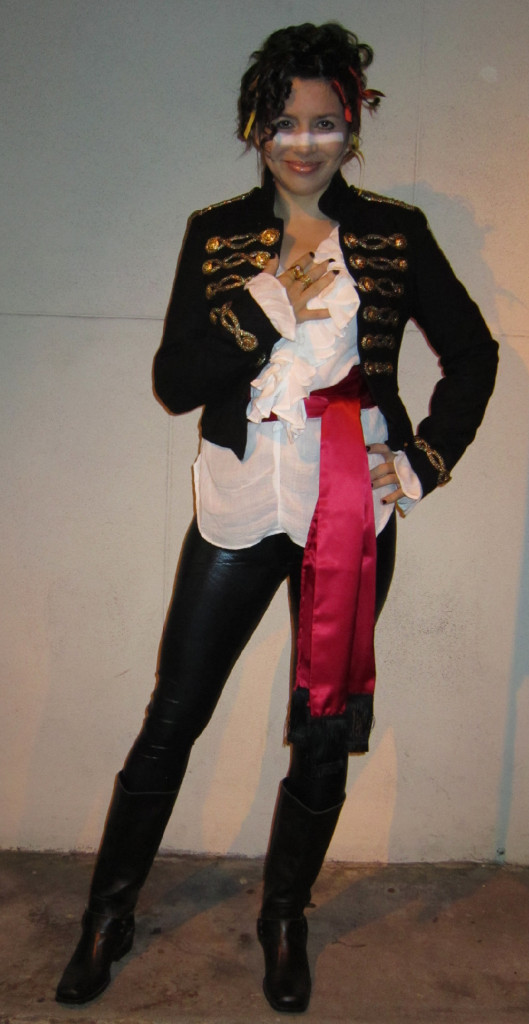 I held onto the various elements of my Ant outfit. I was excited to have the opportunity to wear them again when I got tickets for a concert Adam was scheduled to do in New York this February. However, I wasn’t at all surprised when the show was canceled and rescheduled for October 6. Adam has had some serious mental-health problems that have led to hospitalizations. In fact, I was so positive the October concert would be canceled that I decided I wouldn’t invest effort in hair and makeup. But Adam made it to the Best Buy theater in Times Square, and so did I, with an Ant-worthy outfit, minus the grooming. 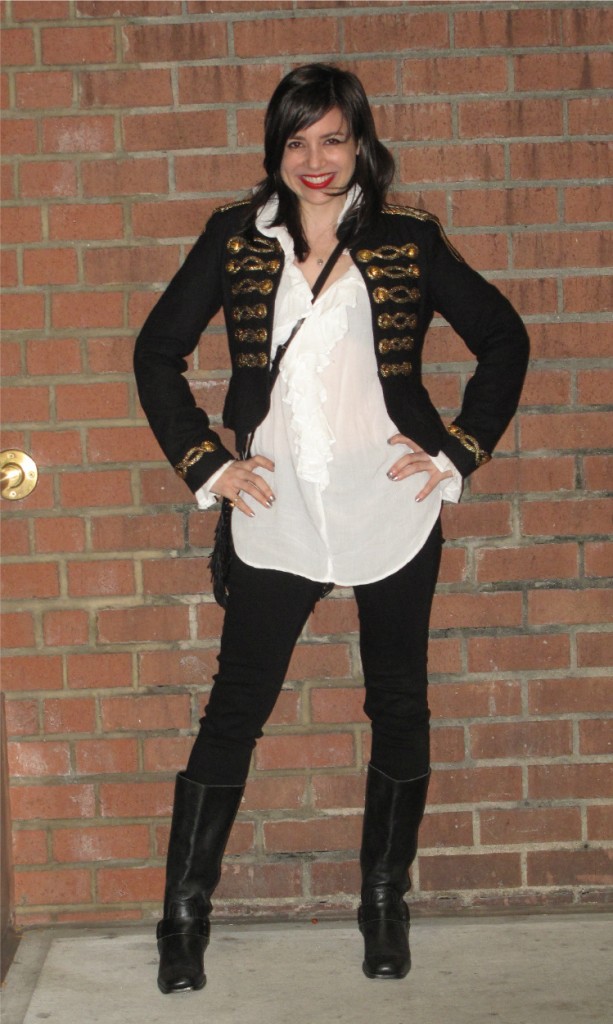 I felt a little peculiar — like I was dressed for Halloween way too early, to be precise — when fellow Ant-person Stacy Lomman and I stumbled out of our cab into the throngs of tourists in Times Square. But once we oriented ourselves, found the theater and got inside, I was the belle of the ball. Well, my jacket was the belle of the ball. I swear, I could have sold that jacket a dozen times for twice what I paid for it. Ant fans were simply in awe of its Ant-ness. Stacy got bodyguard-ish and started protecting me and the jacket: “No more photos, please. The jacket has places to go. Please, no touching!” We were happy when Adam came on and the attention turned to him. We were even happier that he played a two-hour show — with two drummers — in fine voice. 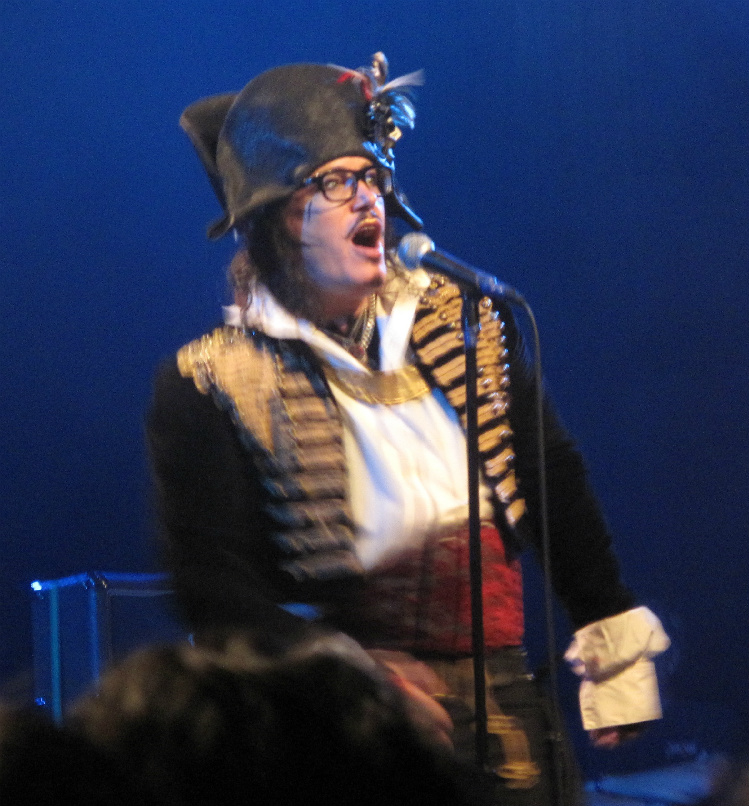 Adam will be 58 this Saturday. Watching him in action, I felt inspired, the way I did at the Madonna concert in September. I kept thinking, “When I’m in my late 50s, if there are people who will pay me cash money to throw on a wig-hat, squeeze myself into a pirate outfit and dance around in front of a screaming crowd, I will do it. I don’t care if I need a Duggar-family-size tube of lube and a shoehorn to get me in that slim-fit pirate outfit. I am so there.” It pisses me off when people say singers should hang up their wig-hats and retire to their rocking chairs just because they’re no longer 20-somethings with concave stomachs. If the artists want to do their thing and I want to see it — and younger people like the 20-ish girl who shrieked directly into my left ear all night want to see it — fuck everyone with a closed mind and nonexistent sense of humor.

Stacy and I definitely had “fuck that” attitudes a few days after the show when we encountered a woman who repeatedly asked us if we were “stalkers” or “groupies” because I knew about Adam’s bipolar disorder and we dressed up. I would have screamed, “WTF, MOM!!!!!! YOU DON’T UNDERSTAND ANYTHING!” except she wasn’t my mom. (BarbaraB is too cool to ask such a question.) Okay, lady, I’ll belatedly answer you the way I would have if I hadn’t kept pretending I didn’t hear you. First, allow me to introduce you to Poodle, which is what I call a very well-known Internet search engine that will tell you all about Adam Ant’s health in a matter of seconds. It’s the kind of thing a blogger might use to write a long-ass post about the post-Sex Pistols music scene in London. (Don’t make me explain what bloggers are!) Secondly, so what if I occasionally like to dress up for a laugh? It’s for my health. Laughter is the best medicine. Anyone familiar with Reader’s Digest knows that shit. Finally, do you think any professional stalker is going to come right out and answer, “Yeah, I’m a stalker?” No! We say more subtle, ominous things like, “No one knows him like I know him” and “He’s my almost-husband.” Jebus, lady. GROW UP!

You might also like
Syria Is in Vogue, Teen Blogger Is in Jail
About That Oscars Jewelry ...
What Wendy Wore: Style Forever by Alyson Walsh
Previous Post: « Thanks for the Jewelry-Blog Love and Pumpkin Cat!
Next Post: A Note About Hurricane Sandy »