I was reading the Hollywood Reporter’s Oscar issue and it included an article analyzing what color and style of gown was most likely to be worn by winning actresses. Gold was the lucky color, worn by 50% of the winners, with white in second place at 36%. But I lost all interest in the math after coming across the photo representing brown (5%), which showed Jennifer Hudson in her controversial 2007 look.

From the Hollywood Reporter.

Hudson was roundly criticized for her brown Oscar de la Renta dress and metallic bolero. After the fact, she distanced herself from the look, indicating she felt pressured into it by her stylist for the evening, André Leon Talley, who was, at the time, an editor-at-large for Vogue. I have to strongly disagree with her and everyone else who criticized ALT’s choice. I loved that outfit then and I love it now. It was the only look in the Hollywood Reporter piece that was deserving of my coveted Best Dressed/Wear What You Want combo award, which, unfortunately for J-Hud, wasn’t created until 2012.

Here’s a better shot of the notorious dress and jacket.

This still looks so fresh and different to me. There’s an interesting timelessness about it. If someone wore it next year, it would look completely modern. I would happily wear this myself, of course. In fact, I wonder if it is behind my relatively recent fondness for interesting cropped jackets.  I still wear the Stacy Lomman cropped silver motorcycle-style jacket that I got in 2011.

I’ve loved this jacket for years.

Formal occasions don’t discourage my jacket-wearing tendencies. In fact, in 2013, I had my designing friend Zang Toi create a hot pink gown just so I could wear it with a crazy, ruffled, blue, cropped moto jacket by Junya Watanbe to the Vanity Fair Oscar party. 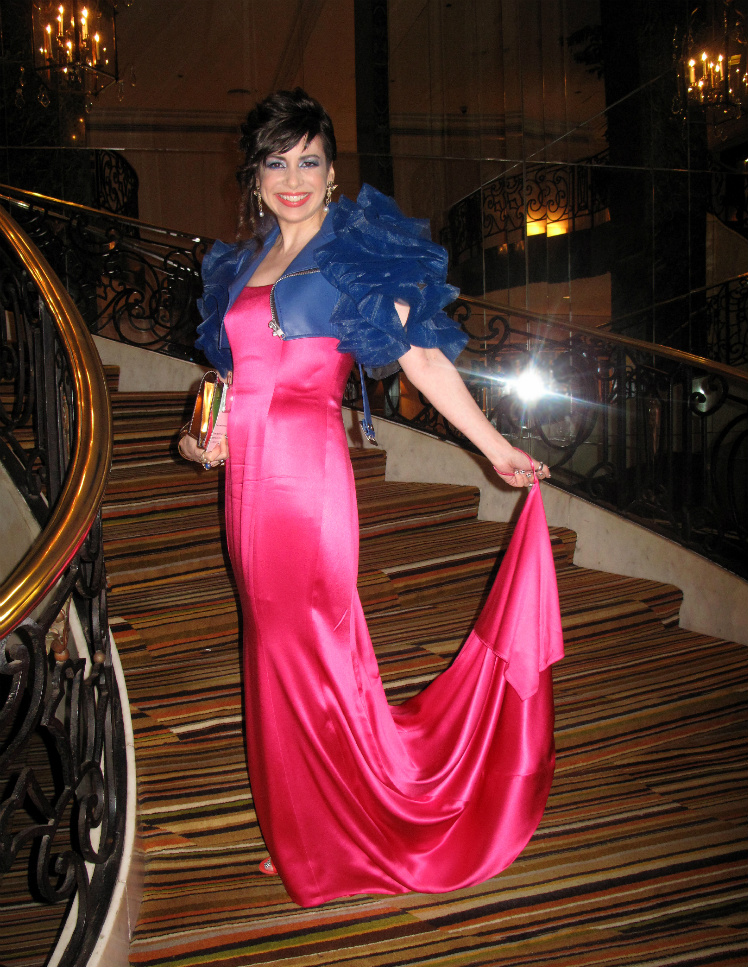 I need to wear this combo again, stat!

That HAD to be subconsciously inspired by Hudson’s ensemble all those years later! When I like a certain style, I like it for a long time. I almost wish I were wearing the Watanabe/Zang Toi combo again to the Vanity Fair party tomorrow, but I’ve got something else up my non-ruffled sleeve. Stay tuned!

You might also like
Musings on Music, Reality TV and Thierry Mugler
Ashish at Browns and Other Sequined Stuff
Fourth Blogversary
Previous Post: « Jewel of the Month: Amethyst Birthstone Studs
Next Post: What Wendy Wore: Weinstein and Vanity Fair Oscar Parties »