Believe it or not, this blog will turn 10 years old this summer! I started blogging alongside an early wave of fashion bloggers, though I was not among the very first. The first blogs popped up in 2006, and I enthusiastically read and commented on them. In fact, I commented so much that Jennine of The Coveted was like, “Um, maybe you should have your own blog.” Jennine always gives excellent advice, so I did what she said, ignoring all the luxury-goods experts who told me social media would ruin my brand. (Those luxury-goods experts are now also social-media experts, natch.)

In 2006 when I was first commenting, people were still hesitant to reveal their identities online. The Web was about anonymity, just like it was in 1993, when the New Yorker ran a famous cartoon with the caption, “On the Internet, nobody knows you’re a dog.” But the world was on the cusp of something new: In September 2006, Facebook would open to the general public, linking people’s real names to their faces, thoughts, and work histories. During this transitional time, a lot of fashion bloggers — worried about repercussions at work or school — adopted pseudonyms for their blogs and hid or cropped their faces out of their small outfit photos. For instance, the groundbreaking Susanna Lau became “Susie Bubble” of Style Bubble. She sometimes took outfit photos in the mirror with her camera covering her face.

Then it all changed, and blogs became tools that could jump-start a career, rather than bring it to a crashing end.  Big stars emerged, including Susie Bubble, Bryanboy, Agathe of Style Bytes, and Rumi of Fashion Toast. My friend Jennine founded a group called Independent Fashion Bloggers that offered advice and community, both online and at real-life conferences. 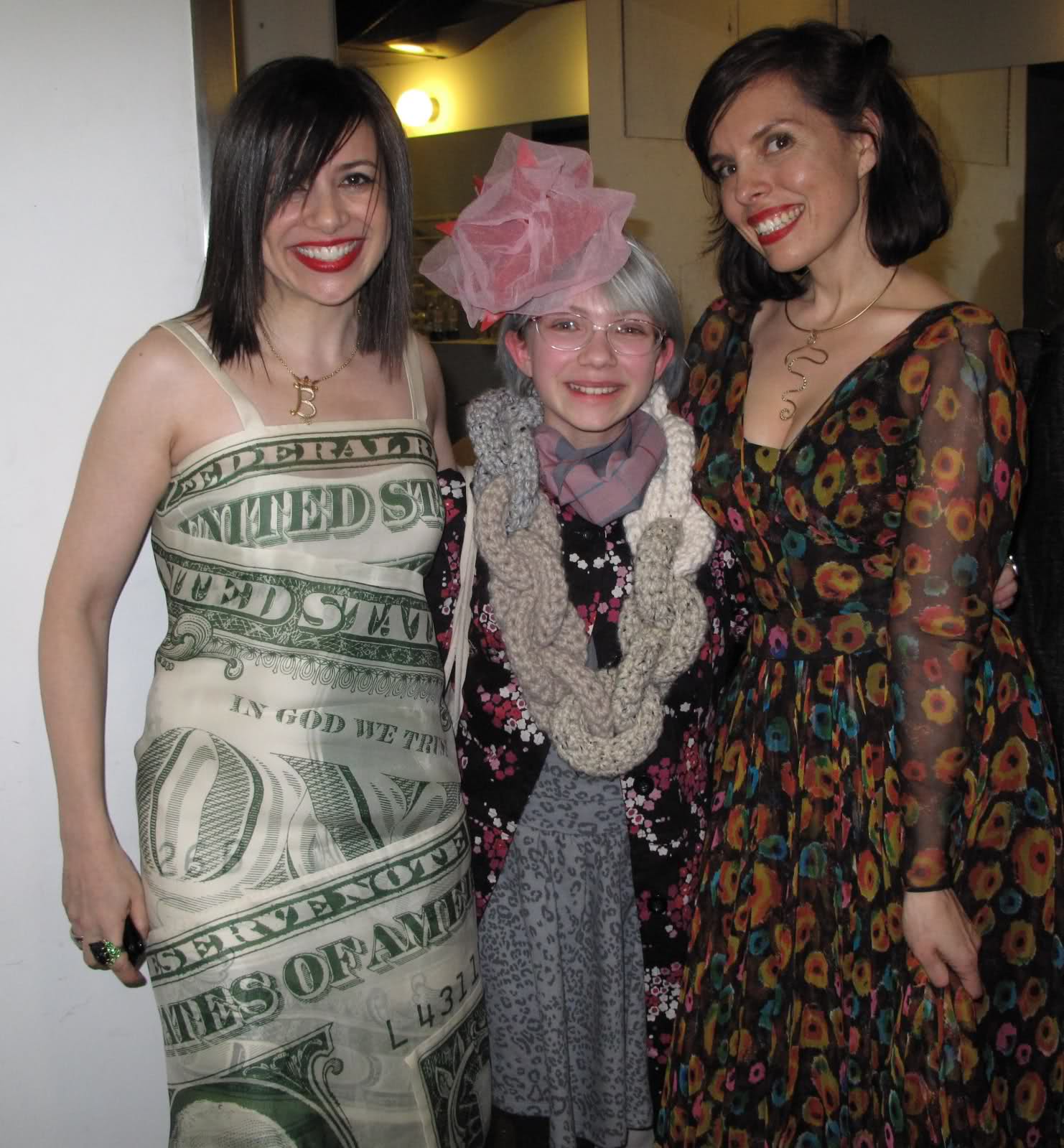 Jennine and me with a very young Tavi Gevinson at an IFB conference in 2010. Click for original post.

People showed their faces in pictures. Outfit photos — whether they were a blog’s raison d’etre or an occasional feature — became bigger, more beautiful, well-lit, and well-composed.  Some bloggers even committed to daily outfit posts, which was one path I was never tempted to follow because it was such hard work! First of all, I don’t dress that interestingly every day, and I was far too lazy to put on an outfit just for photos. Secondly, I didn’t have a relationship with a great amateur photographer — what is now known as an “Instagram husband.” While MrB has many talents, photography isn’t No. 1. A blogger like Jennine, who is a talented photographer herself, used a tripod to take self-portraits, but while I have many talents, photography isn’t No. 1.  MrB and I have that in common. Plus, I’m demoralized by seeing one bad picture of myself. Having to look through dozens of terrible head-to-toe selfies in order to find one acceptable photo would have sent me around the bend.

But, like I always say, “Never is the next new thing™.” After all this time, I’m upgrading at least some of my outfit photos to make them less snapshot-like and more glam, just like an old-school fashion blogger or a modern-day Instagrammer. My right-hand woman Eryn,  an enthusiastic photographer, has persuaded me to step outside for a pictures to complement the clothing-related YouTube videos we’ve been working on.  She’s the photo boss: She fusses with the light, tells me where to stand and how to pose, and then picks out the usable photos. The funny thing is that even with her help, I still think it’s hard work! Plus, it’s dangerous doing photography on the streets of New York. In our first two and a half days of shooting we were molested by strange men twice (there’s a whole separate post coming up about that) and nearly bitten by a dog once. Props to those content producers who have done thousands of serious outfit shoots over the years, because that takes real dedication.

Anyway, these particular photos aren’t associated with any of our coming vlogs, but I wanted to take a couple of good shots of the puffy-sleeved, hand-painted Steve J & Yoni P jacket I wrote about in Monday’s post on what I would have worn to this week’s Met Gala. 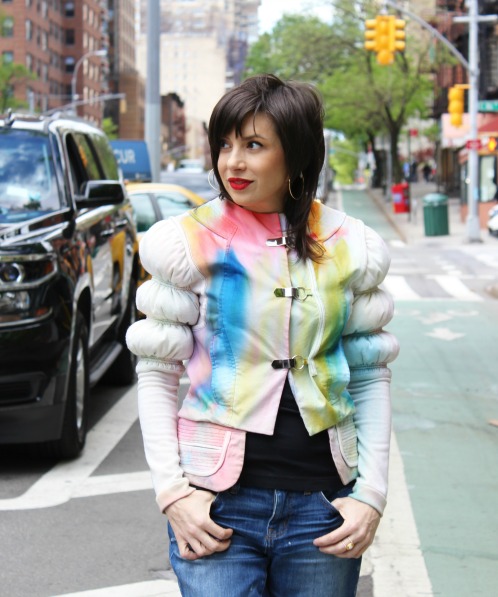 Click for the 2008 photo from the first time I wore this jacket.

I found out about Steve J & Yoni P in 2007 from — who else? — Susie Bubble. In 2008, she was eyeballing this jacket on eBay, and I sneakily bought it out from under her.  All’s well that ends well: Susie had a passion for grey jersey and got the same style jacket with grey jersey sleeves. Read her 2008 post about this, because she wrote about the piece in much more detail than I ever have.

Here’s the full outfit I put on for Eryn. I’m wearing it the same way I wore it in 2008, over a black t-shirt and a pair of boyfriend jeans. Not the 2008 black t-shirt and jeans, because I wore both of those till they fell apart, but it is still the identical look. 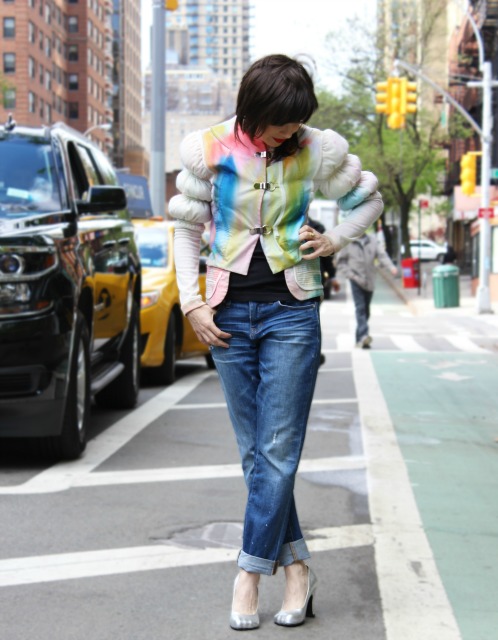 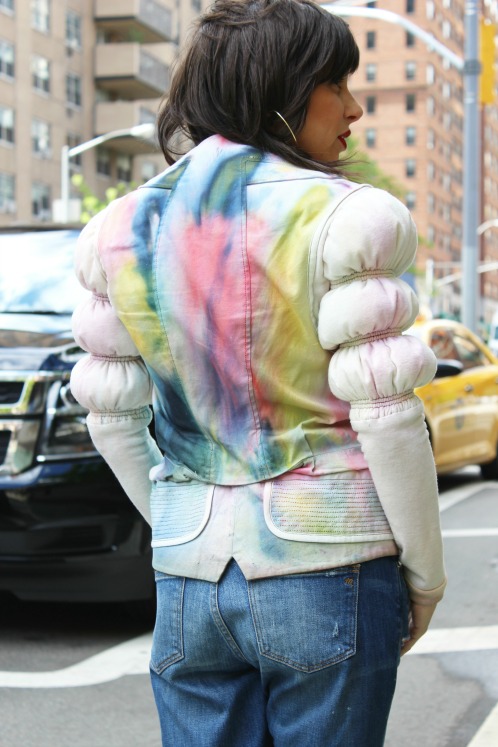 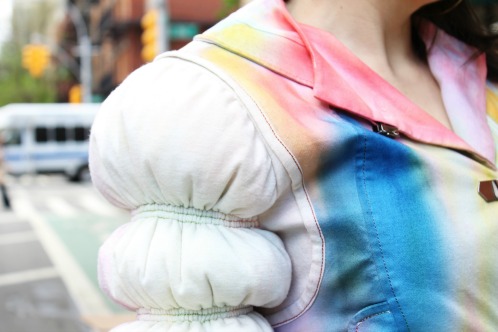 I love the way Susie Bubble described the sleeve puffs.

The bottom panel of the jacket is attached with hidden buttons, so if I wanted to, I could remove it a la the train on Priyanka Chopra’s Met Gala trenchcoat gown. I’ve never done that though. 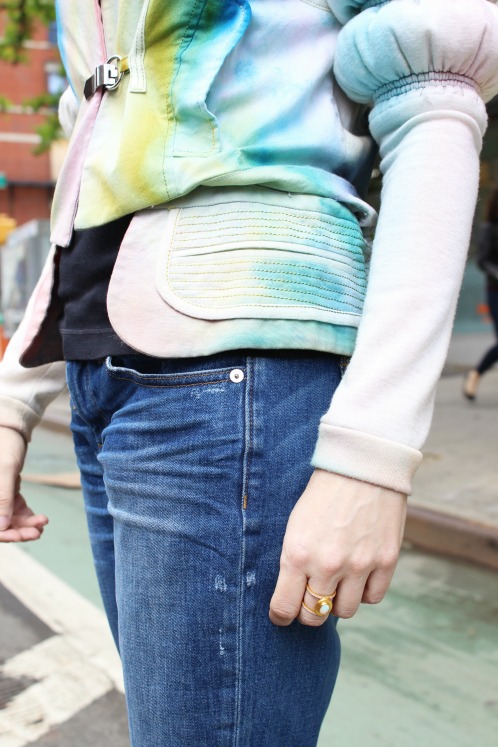 Bottom panel of jacket, plus my own opal ring design.

Check out this guy drinking his coffee in the background as Eryn photographed my animal-toe shoes. He wasn’t one of our molesters, I’m happy to say. 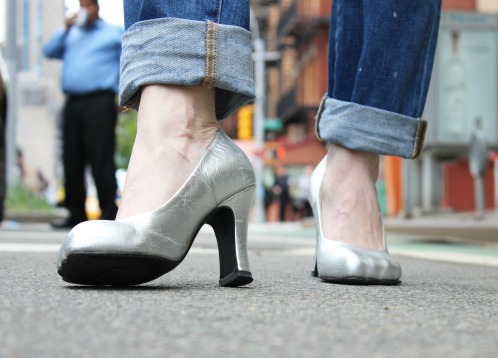 Harmless photobomber in the background.

Next week, I’ll have more new-and-improved outfit photos with a video to go with them. I’ll be talking 1980s style.