I’m in Los Angeles, thrilled to be away from the 1 degree winter weather at home in New York. Last night, we went to a super-fun Oscar viewing party hosted by movie producer Harvey Weinstein, followed by the Vanity Fair after-party. 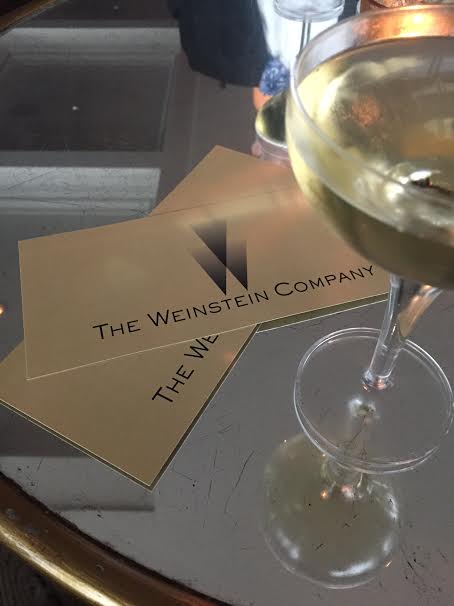 There’s been a couple of times when I’ve worn a dress to the black-tie Committee to Protect Journalists awards dinner in New York in November, then worn the same dress on the West Coast to Oscars-related festivities in February/March. I did that with my leopard-print Patrick Kelly gown in 2010/2011. I did the same thing with my ruffled Watanabe jacket and custom Zang Toi gown in 2012/2013. Well, this year, I did it again. I was so pleased by the vintage Donald Brooks gown and top hat that I wore to the CPJ dinner in 2014 … 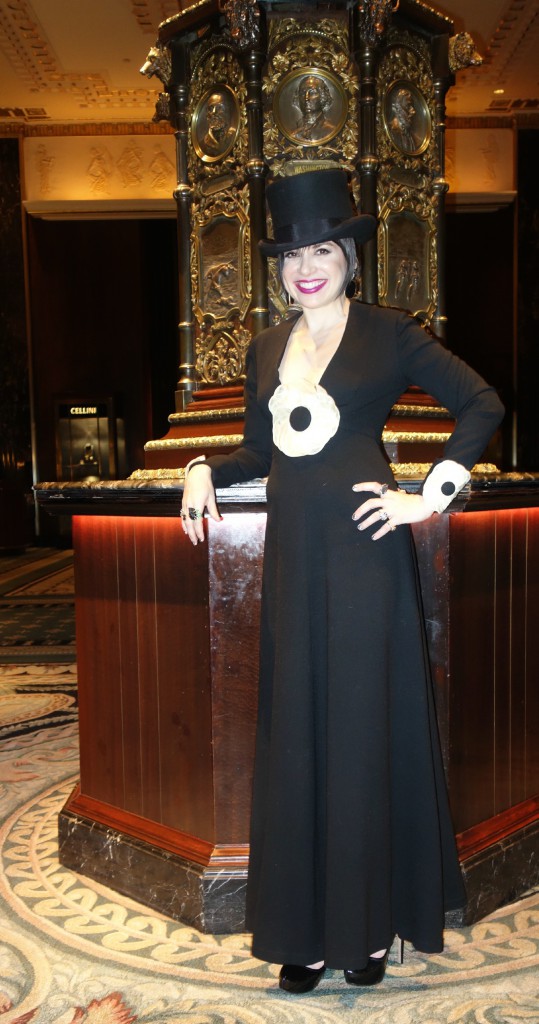 At the Waldorf-Astoria in New York for the CPJ dinner.

… that I wore the whole ensemble again last night. 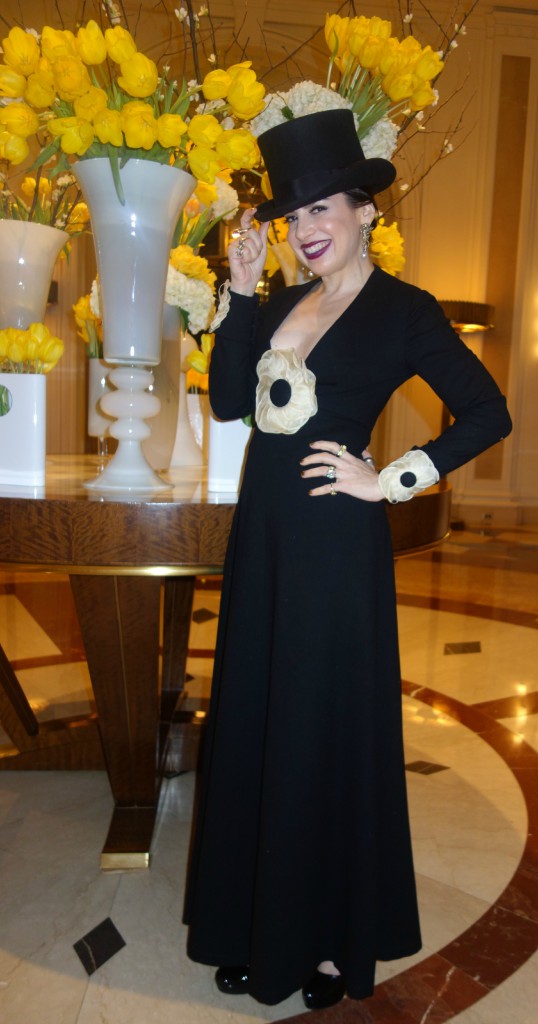 Back at our hotel at 3 a.m., after the parties.

I can say for sure that I was the only person wearing a top hat last night. Look for it behind photos of Sarah Silverman’s entrance. We tiptoed past her while she was striking her poses, and I’m hoping that we sneaked into one of her pictures the way we did with Paula Patton last year. 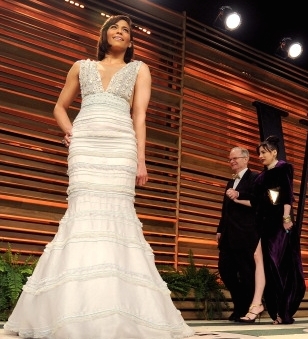 My hat should make me easy to spot, I figure. Once we got in and found Vanity Fair editor Graydon Carter, he exclaimed, “I saw your hat coming in with all the celebrities” on the video feed. Because I couldn’t get MrB to approach Sarah Silverman and remind her of the bonding moment they shared in 2013, we made a beeline for the photo booth. I LOVE photo booths. 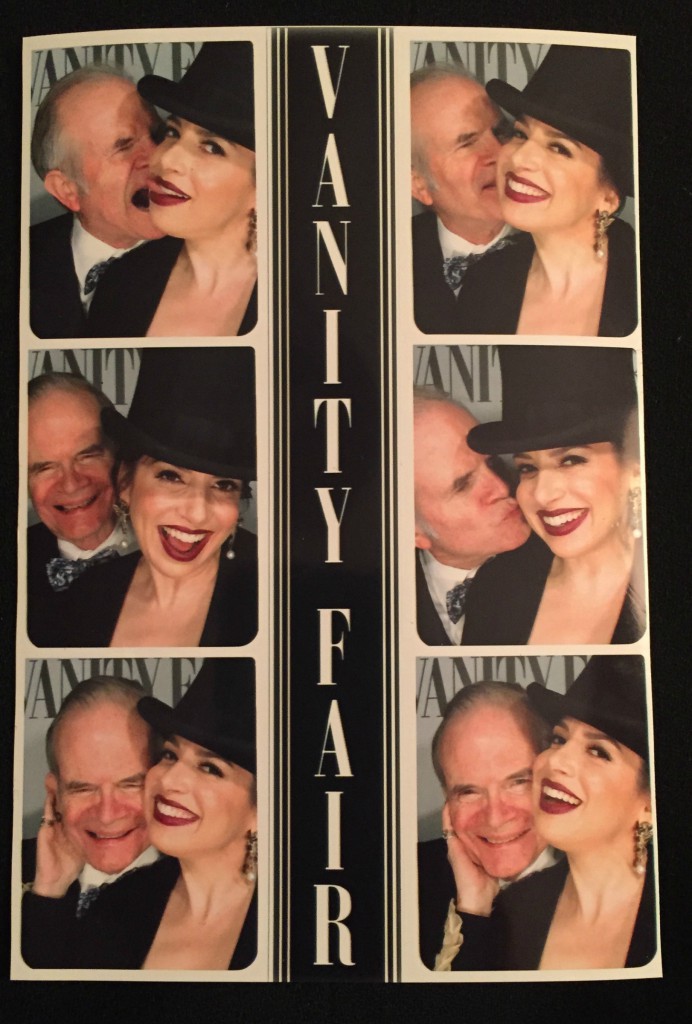 At the Vanity Fair party, we always miss seeing some HUGE celebrity. Last year, it was my almost-husband Paul McCartney. This year it was Beyonce and Jay-Z. *sobbing* But we did see Queen Latifah, Jared Leto, Anna Wintour, Anjelica Huston, Shirley MacLaine, Joan Collins, Christina Aguilera, Zac Posen, Angie Harmon, Zoe Kravitz, Miley Cyrus, Questlove, Benedict Cumberbatch, Jennifer Lopez, Wes Anderson, Solange, Rita Ora, Bill Maher, Behati Prinsloo (I was interested in her dress so I never noticed her husband Adam Levine standing nearby), and Common holding his Oscar. We caught Lupita Nyong’o taking a selfie with David Oyelowo. I told Adrien Brody that his white jacket was “soooo good” and stopped by Oscar-winning short documentary producer Dana Perry to say, “I love your pom-poms.” MrB was thrilled to catch up with Graham Moore, who won Best Adapted Screenplay for the Weinsteins’ The Imitation Game. MrB thanked him for writing a wonderful movie and giving that amazing “stay weird” acceptance speech. I might have ruined the moment by telling Moore that MrB cried so hard at the end of The Imitation Game that I was trying to pretend I didn’t know him. But the highlight for me was when we were inching closer to the bar and spotted Kelsey Grammer. I’ve been watching a lot of Frasier reruns lately, so I felt like I was seeing a beloved longtime friend. Then, as Kelsey passed us, he paused to admire my hat and said with a big smile, “That’s a WONDERFUL look!” I had to drag MrB away from the bar immediately so I could literally — but quietly — scream to him, “OH MY GOD!” about 10 times. And then, of course, I had to tweet what happened while Kelsey’s exact words still in my head.

Other people said complimentary things about the hat too, but the opinion of Seattle’s favorite radio psychiatrist can’t be beat. Kesley, I’m listening! 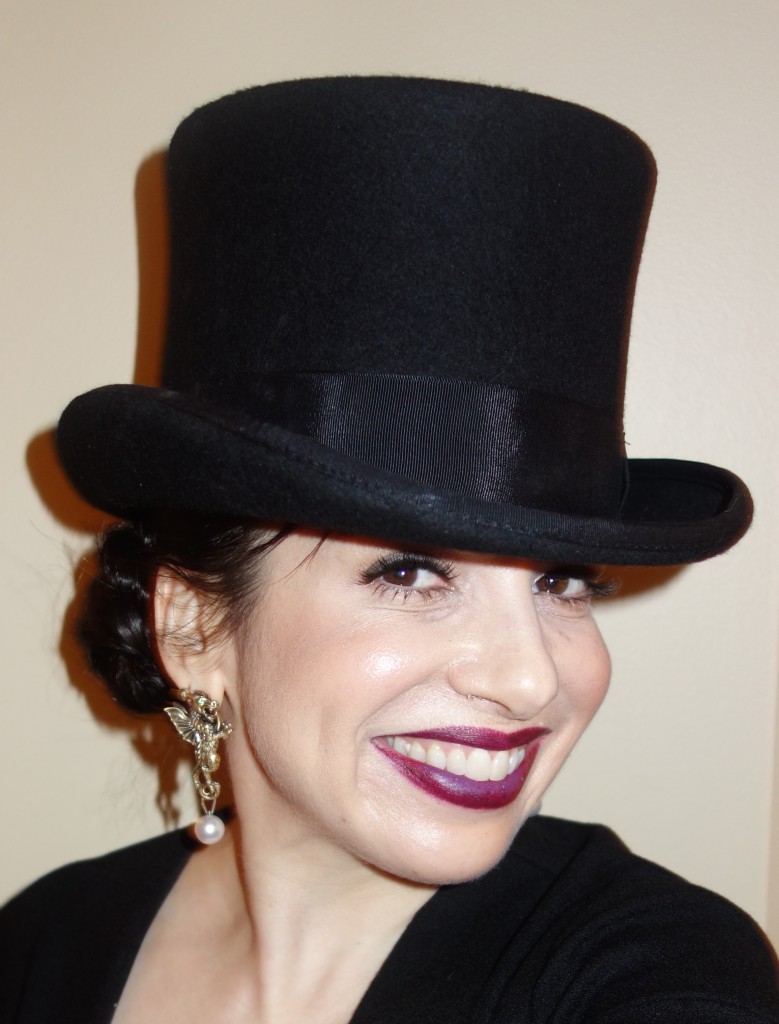 My Empress Wu earrings are about half an ounce of gold each, but I wore them in total comfort all night. Someone NEEDS to wear these showstoppers to the “Chinese Whispers”-themed Metropolitan Museum of Art gala this spring. Stylists! Holla at my right-hand woman Eryn at info at wendybrandes dot com to request a try-on.  Speaking of accessories, thanks to the gentleman at J.J. Hat Center who adjusted my top hat earlier this week, meaning I didn’t end the night with a repeat of the pounding headache I suffered after the CPJ dinner. Hat-wearing is apparently a trickier business that I thought. Who knew?

I’ll be posting the winners of my coveted Best Dressed/Wear What You Want award later today, but first I have to go to the gym and work off all the fried chicken I ate at the Vanity Fair party last night. A waiter set down an entire bucket next to me, and, because no one else in our immediate vicinity seemed interested, I did my best to make that bucket feel loved. When I got undressed that night, I found some fried-chicken crumbs in the top of my dress. Did I eat them? I’ll neither confirm nor deny.

You might also like
Alice Olive: Gorgeous Blogger, Jewelry Wearer, Photographer
Minx by Tracylee Percival, Medici Poison Ring by WendyB
Year of the Dragon Jewelry
Previous Post: « Oscar Fashion Flashback: Jennifer Hudson in 2007
Next Post: My Best Dressed at the Oscars: It’s Split Down the Middle! »