When wig-loving, face-hiding singer Sia hit the Grammy red carpet a short while ago with a supersized hairpiece and a matching child dancer in tow, I knew my search was over. Sia is the winner of my coveted Best Dressed/Wear What You Want combo award for the 2015 Grammy Awards.

As I’ve explained before, you can’t just wear a pretty dress to win this prestigious award! I don’t hold pretty against you, necessarily, but your look has to be interesting too. Controversial is a big plus. If it is more of a costume than an outfit, a la Bjork’s famous Oscar swan dress, you get bonus points.

Because the Grammys are a big event, it makes perfect sense to wear a bigger wig (or hat) than usual. That’s my new rule: Let the size of your wig always reflect the worldwide audience of the occasion. And, of course, Sia needed to bring along 12-year-old dancer Maddie Ziegler — the bewigged Sia substitute in the videos for “Chandelier” and “Elastic Heart” — dressed to match, though Maddie has her face on display. Hmmm. I wonder if Maddie gets a wig with a view in part because she’s serving as a kind of guide dog to wig-blinded Sia?

Now that I think of it, I also liked the kid-as-matching-accessory when Madonna did it with her son at last year’s Grammys. That year, she also wore a gold grill because “it pisses everybody off.” Tonight, Madonna was ready to piss people off again, wearing a full-on matador costume (by Givenchy, bien sûr) to promote her new video, “Living for Love.”

If you don’t like that, guess what? You can kiss Madonna’s ass. No, really! There’s her ass!

In any other circumstances, Madonna would have won my award tonight. An ass-flash from a 56-year-old who has been making people angry for 30 years? Very impressive. But having a seeing-eye kid is more of a novelty, so Madonna must settle for runner-up this time. By the way, I like that Madonna is playing the matador now rather than the matador’s neglected lover of 1994’s “Take a Bow.” 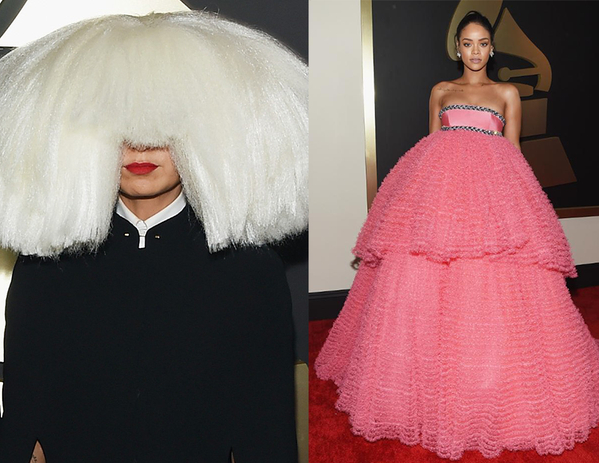 I noticed on the live feed that Rihanna was really wrestling with all that fluff in her seat. Anyway, if the Knights of Ni from Monty Python ever demand a shrubbery of me, I think they’d be equally satisfied with the wig and the dress.

Therefore, Cheryl, I declare this a tie.

UPDATED TO ADD: There’s a great aerial shot of Rihanna’s dress here. To be honest, Sia and Madonna are lucky that I had to go by still photos and didn’t see Bad Gal RiRi walk the red carpet (I’m in Tucson, Ariz., with no E! and a CBS broadcast that started an hour late), because having seen this dress in action, I would have given the big prize to Rihanna. Rihanna’s strawberry-cupcake/quinceañera dress is absolutely the one that’s going to be remembered — and remembered — for years to come. And who else but Rihanna could have managed to look so beautiful and move with grace in this dress? I’d say Linda Evangelista during the height of her runway career and no one else. Fortunately for Sia and Madonna, once my award is given, it cannot be taken away! That wouldn’t be right. But in an alternative universe, Rihanna would have snagged top honors and Prince would have been the glamorous runner-up. The pink dress is the true Pharrell’s hat of 2015.