After seeing Neil Young perform at Carnegie Hall on Monday, I felt like I vaguely remembered Neil having a quarrel with MTV in the ’80s. I was right! It was in 1988, when Neil released a video for the anti-commercialism song, “This Note’s for You,” which made fun of major advertisers both lyrically and visually.  “Ain’t singing for Pepsi, ain’t singing for Coke,” is one of the lines.

Neil also declared that he wasn’t singing for Miller; Bud; or Spuds (MacKenzie), Budweiser’s dog mascot. The line “I got the real thing,” imitates Coke’s “It’s the real thing” slogan, and of course, “This note’s for you” is based on Budweiser’s “This Bud’s for you.”  The video mocked Whitney Houston’s Coke commercial and Michael Jackson’s Pepsi commercial — it even WENT THERE and made fun of Jackson’s hair going up in flames while shooting for Pepsi. There’s also a parody of an artsy Calvin Klein ad with a memorable spoken line: “Liar, give me back my shoes.”

MTV banned the video. I love that there was no censorship-worthy nudity, violence, or twerking in this video — it was banned purely for its anti-sponsorship message. A fledgling network that was supposed to be all about rebellion and youth banned a video by a 42-year-old man! Ha! We 40-somethings are so badass. Neil responded with this statement:

“MTV, you spineless twerps. You refuse to play “This Note’s For You” because you’re afraid to offend your sponsors. What does the “M” in MTV stand for: music or money? Long live rock and roll.”

MTV caved and started playing “This Note’s for You” (which was directed by Sex Pistols mocumentarian Julien Temple), ultimately awarding it Best Video of the Year at the Video Music Awards on Sept. 6, 1989. Neil followed up the VMAs win by playing a ferocious version of “Rockin’ in the Free World” on Saturday Night Live on Sept. 30, 1989. I think this is the most impassioned SNL musical performance I’ve ever seen. I highly recommend you watch it but be careful: IT WILL MELT YOUR FACE OFF!

Neil Young – Keep On Rockin’ In The Free World by Killer_Tomato

A few months earlier that year, I graduated from Columbia University. My parents recently dug up my college yearbook. 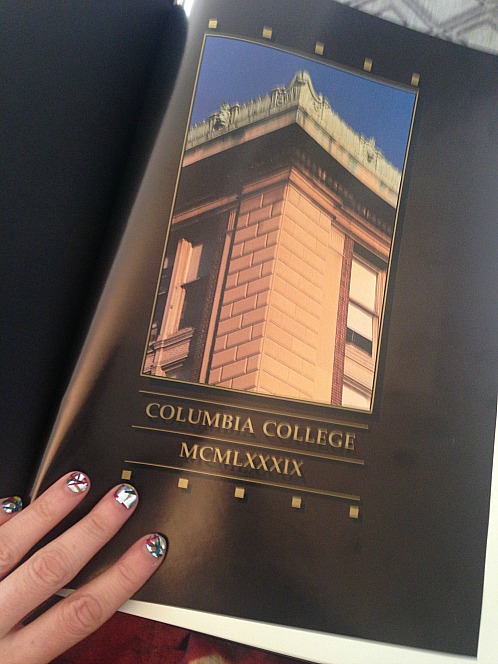 I have two photos in the book and, it must be said, I didn’t look half as cool as Neil Young did at that time even though he was twice my age. I’m kind of appalled by my official senior photo. What’s going on with the hair? And those eyebrows! 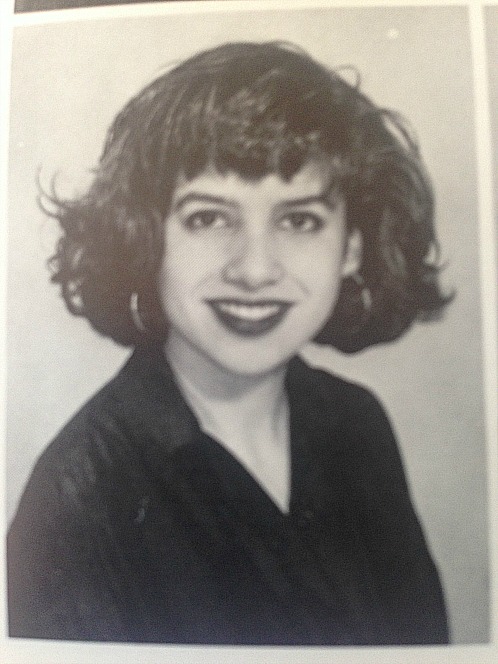 I wonder if those are the same hoop earrings that I was wearing in 1987? If so, I sure loved them.

I like this picture from the Columbia Spectator page a little better. 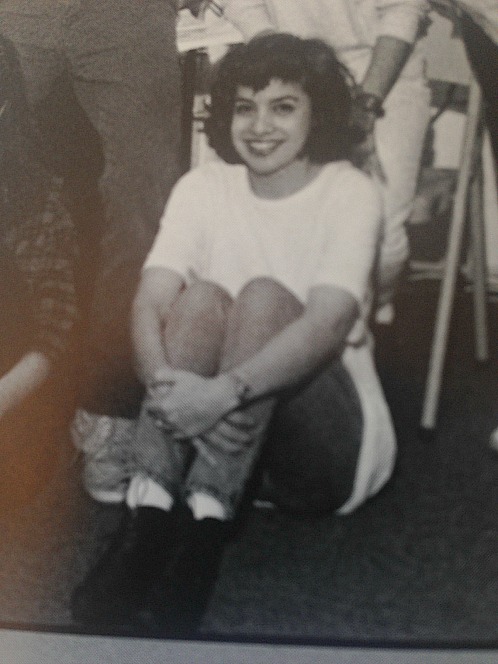 It’s interesting to see that I’m wearing jeans for that picture instead of my uniform of black leggings. They look like they could be the same type of Guess ankle-zip jeans that I wore in high school, but I’m not 100% on that. I am sure that that’s a men’s Hanes undershirt I’m wearing with the jeans. I lived in those things.

Anyway, back to Neil Young. I’ve already said that I was surprised that the New York Times put such a negative spin on some of Neil’s interactions with the audience on Monday. 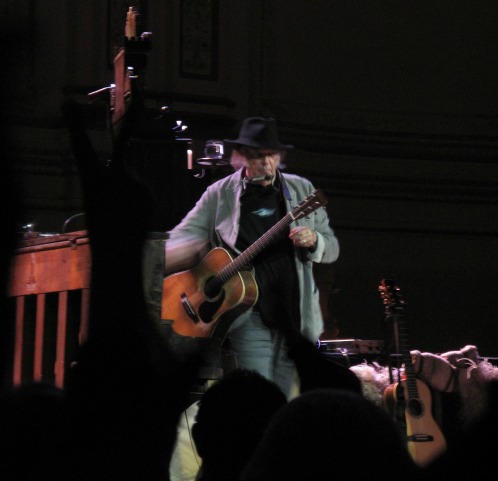 A couple of people have asked me about it as other publications have picked up the story, so here’s my version. Before he interrupted the audience’s clapping on “Ohio,” he interrupted himself during two different songs, so it’s not like he was picking on the audience and acting like he was perfection incarnate. (Both times he said something like, “Wrong key!” and changed his harmonica.) People ate that up. They laughed and applauded again when he stopped and restarted “Ohio” — you can hear that in my video, which picks up with him talking right after he said, “Wrong!” and stopped playing. Listen closely and you can even hear one of the overly chatty women in back of me saying, “Funny!” as he restarts the song.

People also laughed when he said, “You paid real good money to be here so you should get to listen to each other.” There were some really annoying guys yelling shit — they seemed to be die-hard, possibly drunk/high fans, or else I would describe them as hecklers. I did a quick online search right after the show and Neil has used that line before. A lot of performers have standard lines they use to deal with rowdy audience members. I thought it was a pretty low-key response, considering we were only five rows away from the front-row’s yelling dude and the normally very pacifist MrB was saying, “I want to go down there and punch that guy.” That’s how irritating that particular man was. I wouldn’t have blamed Neil (or any performer) for singling that person out and saying something truly nasty to him, but Neil didn’t do that. So I say these news reports are twisting what happened: It was certainly nothing like the dramatic cellphone-at-the-Philharmonic incident of 2012.

I forgot to mention a cute moment. There was mood lighting on stage, with candles on the pianos. This iPhone photo is very blurry, but I’m sharing it because you can see the bright white candle on the left. 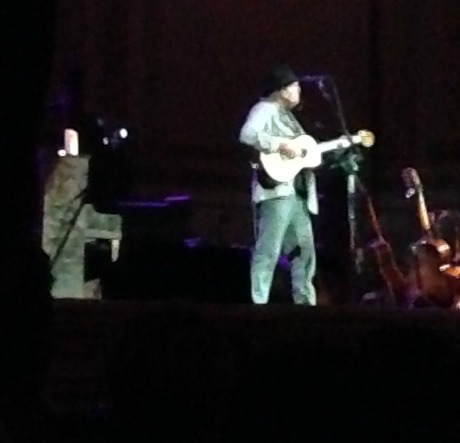 At one point, Neil was talking to the audience and he suddenly looked at the candle, picked it up and held it upside down … and laughed. Its little light kept glowing because it was an electric candle. The audience laughed too. He moved on with what he was doing but then he started smiling again. I said to MrB, “OMG! He’s still cracking up over the fake candle!” It seemed totally natural, but Neil is an ultra-experienced stage performer, so who knows. If you’re lucky enough to be going to the show tonight or tomorrow, let me know if there’s any candle action.

UPDATED TO ADD: When Neil told the story about how he reacted to people yelling song requests at him during his Carnegie Hall shows in 1970, which I included in my previous blog post, he said he walked off the stage back then … and there was no intermission scheduled. He then pointed out that we did, indeed, have a scheduled intermission this time. Rolling Stone has the full quote.

You might also like
Why Don't You Choke on a Fashion Accessory?
The Rihanna Plane Has Landed
Jackets, Now and Then
Previous Post: « “It’s a Bit Nipply Out”
Next Post: What Wendy Wore: Music at Sidewalk Cafe »