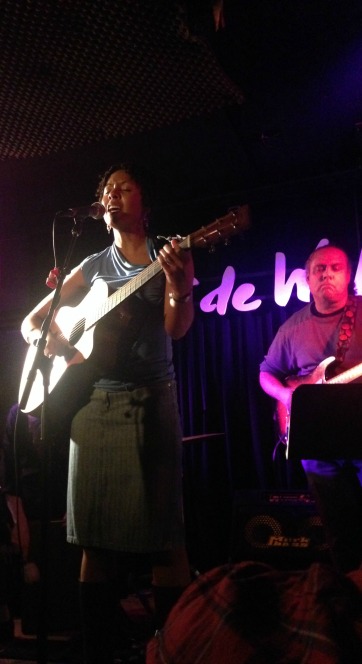 Nicole and her guitar player.

When she’s not on stage, Nicole is the director of communications at ProPublica, MrB’s organization. That job apparently attracts musical people!  In 2012, I went to see former communications director Mike Webb perform in Brooklyn.

Here’s Nicole performing one of her songs, “The Edge.”

I wore a vintage Moschino jacket that hasn’t appeared on the blog since 2008. 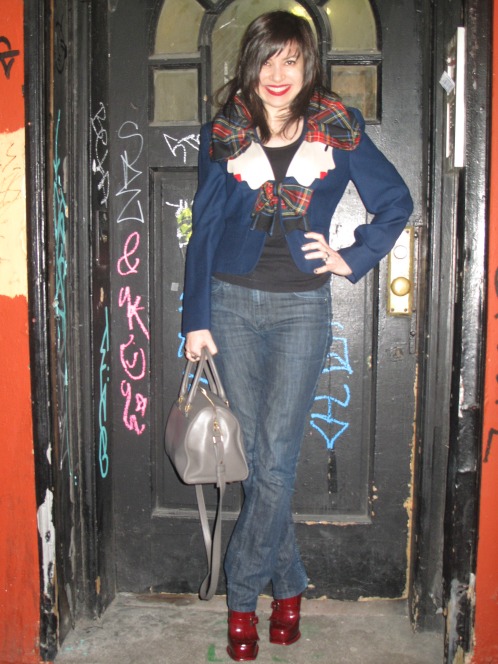 After Nicole played, a trio called Swampboots performed. They were a lot of fun. You never know what kind of cool musical act you’ll stumble across in New York. Sidewalk Cafe is on Avenue A at East 6th Street. It’s been around for nearly 30 years and is just a few blocks away from the site of the now-closed Life Cafe, which was made famous outside New York by the musical Rent. If you’re a Rent fanatic, looking for a little bit of that neighborhood vibe, swing by Sidewalk Cafe. From there, you can walk over to another place that dates back to before the neighborhood was gentrified: the occult store Enchantments, which is on East 9th Street, between Avenue A and 1st Avenue. Go to the counter in the back and get a custom-made candle spell. In addition to curing your woes with magick, the candles smell nice and look pretty. Years ago, I got a bottle of inspiration there. I think it worked!

You might also like
What Wendy Wore: Stacy Lomman Dress for Tina's Birthday
What Wendy Wore: Moschino and Zandra Rhodes, Again
What Wendy Wore: Dresses Through the Years
Previous Post: « Throwback Thursday: Neil Young (and Me) in 1989
Next Post: My Best Dressed at the Golden Globes: Emma Watson »