The TWERK necklace that I picked as my August Jewel of the Month isn’t the only new addition to my WENDYB by Wendy Brandes diffusion line. Check out my sterling-silver GANGSTA necklace! 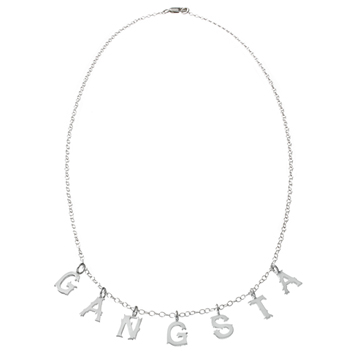 Big thanks to gorgeous Jennifer Heebner, senior editor at jewelry-trade publication JCK, for including the GANGSTA necklace in her blog post on word jewelry as a hot trend for fall.

The fact that word jewelry is in style reminds me of something Valerie Steele, the director and chief curator of The Museum at the Fashion Institute of Technology, said to me when I was interviewing her for my recent Huffington Post story about the lifespan of fashion trends.  She pointed out that some looks — such as tartan, black leather and red lipstick — never go away, but there are times when they gain critical mass and are newly “in.” Steele explained, “It becomes a trend if there’s enough designers doing it at the same time and the same season, and a journalist can put together a story.” She noted, “I’m wearing camouflage print shoes now. Camouflage has been in and out of fashion since the 1960s, but it’s stayed in fashion a lot for the last three years. Even dogs are wearing camo.” Two other examples are skulls and leopard print: “Skulls have become like leopard print, it’s a perpetual thing that someone’s always do at some point.”

Of course, word/letter jewelry is similar. It’s always around. In fact, I still have word and letter jewelry that I wore in the 1980s. For my own line, I started designing word/letter/acronym jewelry in 2008. My first design was the swear-ring set that Topshop knocked off four years later. When that happened, I knew that word/letter jewelry was about to get huge in the mainstream again. Interestingly, that’s also when a few people told me I should move on from the word/letter concept. Um, what? Because it’s getting really popular, I should stop doing it? SMH. That’s the kind of advice that small-business owners get all the time. Obviously, I didn’t listen. I’d already developed my own font and come up with a lot of fun, social-media-inspired concepts, so I wasn’t throwing it all away because it was getting too chic. And I’m glad I stuck to my guns because, as Jennifer Heebner noted, the oversize word jewelry seen on Lanvin’s Fall 2013 runway has led to that all-important critical mass. 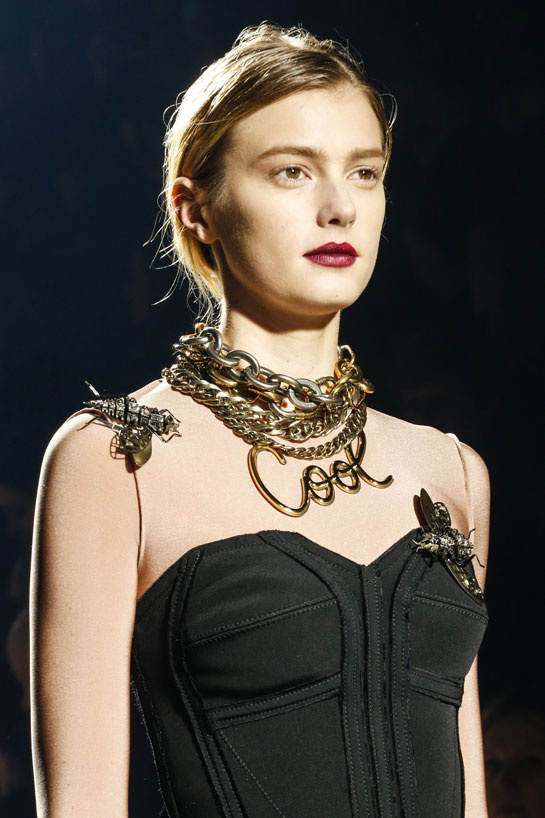 And that means I get to be in a JCK story about being on-trend. Woot!

Another note about my GANGSTA necklace: it was not inspired by my gorgeous rapper friend Gangsta Boo. When I did a nameplate necklace for Boo, I used her full nom de plume (nom de rap?) and her own font. 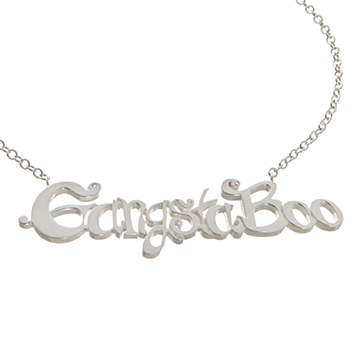 The GANGSTA necklace was inspired by a new artist, Kat Dahlia, who has a great song called “Gangsta.”

I actually spoke to Kat’s peeps about the necklace. They were very interested but they had to do all kinds of image planning and analysis first, ahead of the album release scheduled for this year. I swear, these music peeps wear jeans and sneakers in the office but they still remind me of the PowerPoint-loving management consultants that I worked with during my corporate days. I wonder if any of the PowerPoint decks included Kat getting busted for DUI and resisting arrest this week. At least she took a glamorous mugshot. 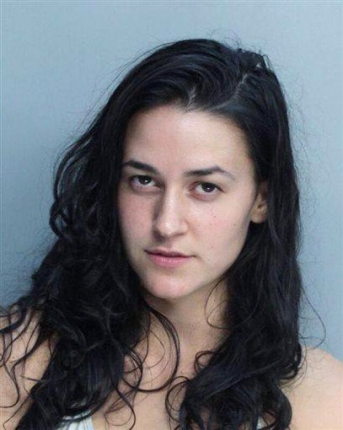 When the owner of the gossip site Crazy Days and Nights tweeted that Kat had won the award for best mugshot photo of the year (so far) I concurred, expressing admiration for her gently windblown look. I was ROTFLMAO at the response:

Yep, definitely all that was missing from this mugshot was my GANGSTA necklace. How appropriate would that have been? Yo, Kat’s peeps, call me before her next arrest and we’ll get her all dolled up in of-the-moment word jewelry!

You might also like
Valentine's Jewelry: Toi et Moi Rings
Surrender to Pink
See My Jewelry on Nov. 19 at Pink Elephant
Previous Post: « Jewel of the Month: Twerk It in My Twerk Necklace
Next Post: The Week in Review »