Just in time for Halloween (but perfect all year round for Egyptologists): my new mummy locket in sterling silver.

This sarcophagus opens up to reveal... 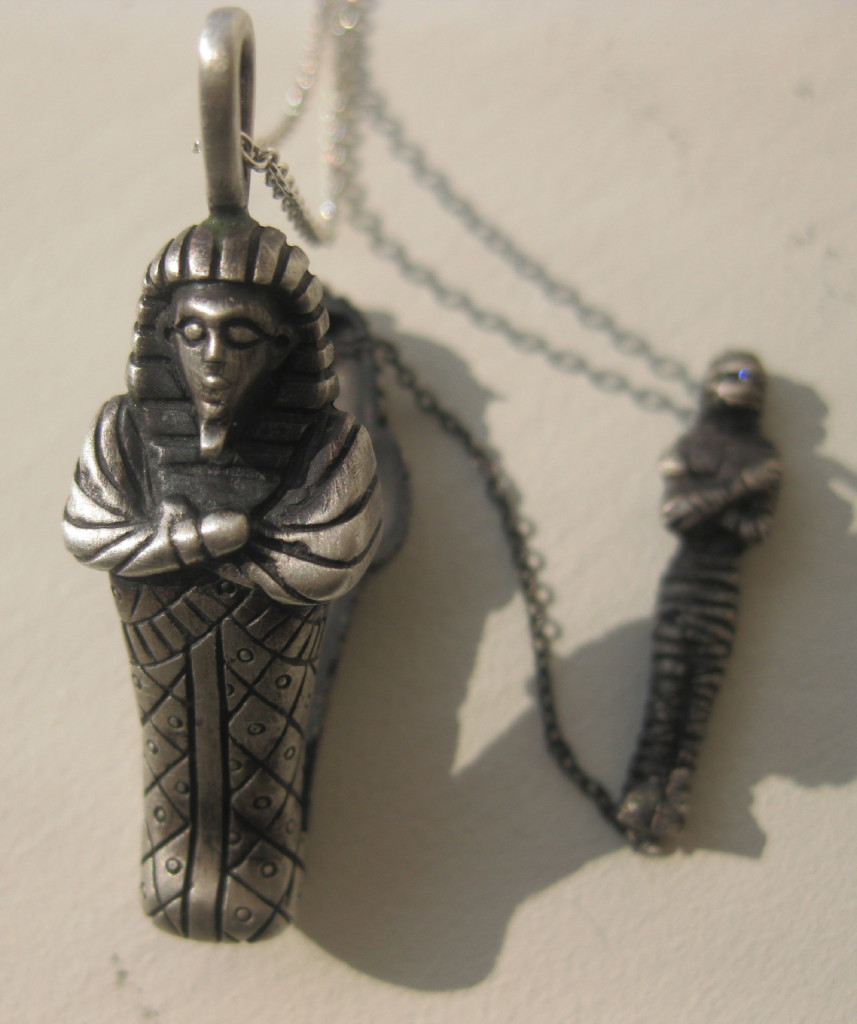 ...a tiny mummy with diamond eyes!

I’ll get better pictures of this piece soon. As I mentioned in my last post, my camera is malfunctioning and I was lucky to get these photos. I’ve got a new camera on its way.

Anyway, the sarcophagus is about 1 1/4″ long and hangs from a 16″ chain in its current incarnation. Isn’t the little beard on the sarcophagus cute? The mummy itself is finished on both sides. Totally 3D. It’s chained to the sarcophagus so you won’t lose it. Also, I’ve seen a lot of mummy movies, and I wouldn’t want your mummy to escape from the sarcophagus and run through your town causing teeny-weeny amounts of damage.A  This piece is $500. If you’re interested, holla at me at wbjewelry at hotmail dot com.

If you’re big on Egyptian things, check out my other Egyptian-inspired jewelry.

The title of this post makes me think of my gorgeous sister, Terri Berry. When cable television took off in the early ’80s, there was a dearth of programming. I swear, the first year of MTV consisted entirely of Video Killed the Radio Star and footage of a rocket blasting off. One of the movie networks hypnotized my sister with endless showings of Mommie Dearest, Faye Dunaway‘s campy and career-killing movie about actress Joan Crawford‘s alleged child-abusing ways. To this day, Terri Berry has lengthy portions of that script memorized. A number of years ago, I rented the movie just so she could astonish my gorgeous friend Diane by acting out the scenes in sync with the original. My dream is to rent out an off-Broadway theater or movie theater where I would host nightly screenings of Mommie Dearest accompanied by Terri Berry’s commentary and performance. I would serve booze and beat willing bitches with a can of Ajax (the beatings would cost extra). You know the gays would love it!

It’s hard to pick just one scene to share here when they’re all so embarrassing excellent. The wire hangers scene is too predictable. I’m going to have to go with the “I AM NOT ONE OF YOUR FANSSSSSSSS!” slapfest. Terri Berry’s performance of this is impeccable. She even chokes herself, I swear!

You might also like
Thursday Book Club: Pope Joan
My Black Swan Ring on TV and Other Mentions
Just What Teh Interweb Needs ... More Tits!
Previous Post: « Hair-Raising Times With The Shoe Girl
Next Post: Reminder: Sample Sale Friday and Saturday »