My non-New Year’s Resolution — going into effect immediately — is to better organize my calendar. I tend to keep too much information in my head or in email, thinking, “There’s no way I can forget about something as important as that!” Then, of course, I miss or almost miss the event. It happened with a Madonna concert at Madison Square Garden last month; fortunately, at 6 p.m. I realized my tickets were for that night instead of the following night. I wasn’t so lucky with Christie’s annual Ancient Jewelry auction. Today, I thought, “Isn’t that coming up?” only to discover it was this past Wednesday. I’d even saved a Wall Street Journal article since October to remind myself! 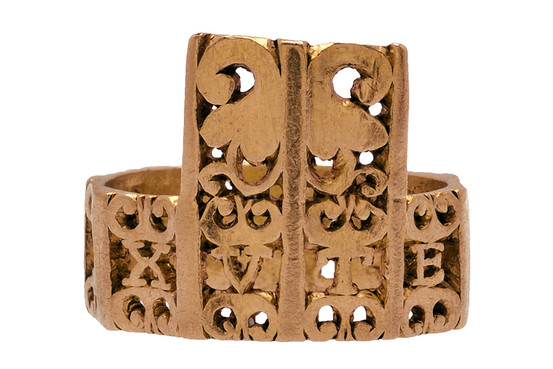 A Roman ring from Les Enluminures Gallery. Photo via the Wall Street Journal.

I wasn’t planning to buy any jewelry, but I did want to look. As I’ve said before, my own jewelry designs are frequently inspired by medieval or antique pieces. That’s part of why I started my line! I loved the patina, detail and symbolism of ancient jewelry, but I worried it would be too delicate to wear, even though buyers quoted in that Wall Street Journal story say they do wear theirs. My bigger issue is that I usually like the concept of the old pieces more than their actual appearance. We now have superior gem-cutting and jewelry-making technology, so we can take the concepts a lot further. As a result, when I do a piece that’s inspired by the past, I aim to make it better than — or at least different from — the original. For instance, this is an original Phoenician swivel ring sold by Christie’s in 2011:

You can see the mechanism for the swivel action on each side of the center stone. That was also true of the Egyptian swivel rings that I admired in the Metropolitan Museum of Art. That detail made me want to design a ring in which the mechanism remained completely hidden. I succeeded! No one has ever guessed my 18K-gold Hathor ring has a center that swivels from turquoise to carnelian. Here’s the turquoise side. 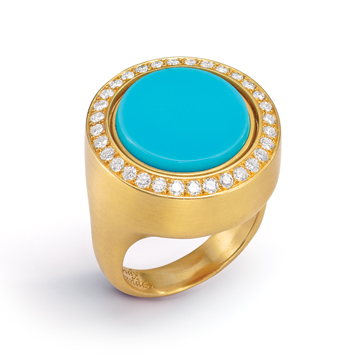 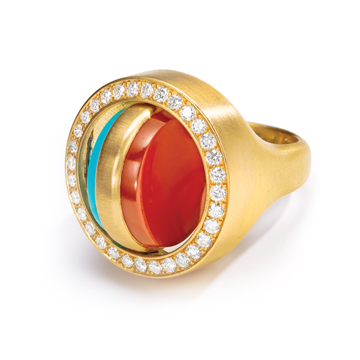 There’s carnelian on the other side of the turquoise.

… and here is the ring with the carnelian side up. 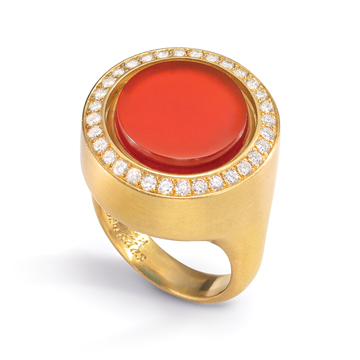 Museums and books give me more inspiration than I can act on, but it would be fun to see what turns up at a sale anyway. The Wall Street Journal article says that New York’s Winter Antiques Show is another good source of ancient jewelry, so let’s put that on my calendar now: January 25 to February 3, 2013.

You might also like
You're Invited to a Sample Sale
But I Wanted This! Napoleon and Josephine's Engagement Ring
Recommended Reading From the Weekend Newspapers
Previous Post: « Stacy Lomman Wardrobe Therapy: Black Skirt Ops
Next Post: OMG-Worthy: Vintage Trompe L’oeil Gown »