Welcome to Part III of my report on A Distant Mirror, The Calamitous 14th Century by Barbara Tuchman. Read Part I and Part II to get yourselves oriented.

On Saturday, in my second of a series of posts on the book A Distant Mirror, I listed the disasters of the 1300s. Those included what Tuchman calls “the most lethal catastrophe in recorded history” — the plague known as the Black Death, which by some estimates wiped out a third of the European population between 1348 and 1350. There were also a series of English-French conflicts lasting 116 years and known as the Hundred Years’ War; a schism in the Catholic Church that resulted in two simultaneous popes; Crusades; Jew-killing; hysterical mass movements including self-flagellants and dancing maniacs; and the climate change labeled the Little Ice Age. 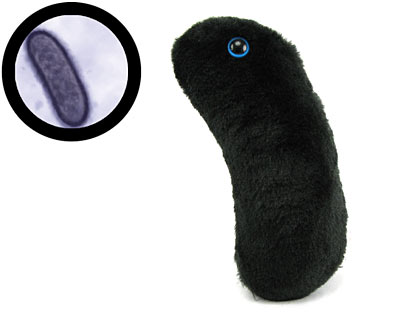 A somewhat huggable version of “Black Death” is among the Giant Plush Microbes available at ThinkGeek.com.

The 14th century was a time of extremes and the politically astute French nobleman Enguerrand de Coucy VII lived through many of them between 1340 and 1397.A  Tuchman chose to use Coucy’s life story as a narrative thread throughout her book because not only was Coucy well-connected — inheriting a powerful barony and marrying the King of England’s eldest daughter — but he was fairly well-documented, having patronized an important chronicler of those times, Jean Froissart.

By age 10, Coucy had lost his parents to two of the scourges of his time: first, his father died at war, then his mother and stepfather fell to the Black Death. The lands he inherited in Picardy included a castle with a central tower, or donjon, that Tuchman describes as:

“… the largest in Europe, the mightiest of its kind ever built in the Middle Ages or thereafter. Ninety feet in diameter, 180 feet high, capable of housing a thousand men in a siege, it dwarfed and protected the castle at its base, the clustered roofs of the town, the bell tower of the church and the thirty turrets of the massive wall enclosing the whole complex on the hill.”

The medieval mega-structure survived relatively intact until 1917, when the German army occupying Picardy used 28 tons of explosives to blow the castle to bits. When MrB and I visited Paris last summer, we took a side trip to see those bits. We stayed in a beautiful inn whose owners were politely baffled by why we’d want to visit a bunch of ruins when there was a perfectly nice and completely restored castle at nearby Pierrefonds. This has happened to me before. In England in 2008, while I was trying to get to the ruins of Kenilworth, a cab driver said, “But there’s a real castle at Warwick, love!” I LIKE RUINS, OKAY? I get to use my imagination with ruins. 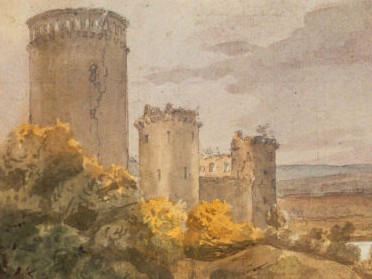 MrB where the donjon used to be.

Since we were staying at the inn and didn’t have to rush back to Paris, we went to Pierrefonds too …

The turrets at the rebuilt Pierrefonds look a little Disney to me.

… mostly so I could complain that I didn’t enjoy it as much as the Coucy castle.

The majestic ruins of Coucy.

Coucy’s castle wasn’t just big — it was high-tech. Great acoustics made it possible to holla at more than 1,000 soldiers at once, while Tuchman says one contemporary called the kitchens “worthy of Nero.” The rainwater fish pond on the roof sounds totally Soho House. And you can tell a lot about a place from its bathroom, so I was impressed by the description of the donjon‘s multi-level latrines. Reading about latrines in the non-latrine part of the ruins of Coucy castle.

Tuchman says the underground pits used for latrine drainage were “later mistaken by investigators of a more romantic period for secret passages and oubliettes. Under the concept of ‘noble’ architecture, the 15th and later centuries preferred to ignore human elimination. Coucy probably had better sanitation than Versailles.”

The Coucy family’s ego was apparently as big as its donjon. Tuchman describes their motto as one of “simple arrogance.”

(Not king nor prince,/Duke nor count am I;/I am the lord of Coucy.)

In layman’s terms that means: “Take that, royal people! Our donjon is bigger than your donjon.” By the way, if the word donjon rings a bell, it’s probably because the word “dungeon” comes from it.

Next Thursday: the fourth and final installment of my Distant Mirror book club posts.