I was happy to see Kate Winslet win an Oscar last month for her performance in The Reader. 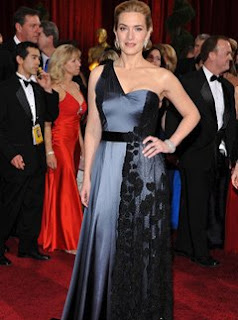 Winslet on her winning night

If you haven’t seen the movie, I recommend it. Based on a book by Bernhard Schlink and set in post-World War II Germany, The Reader is about a teenager who has a summertime affair with a much older woman. Years later, while attending law school, he attends a trial where the woman is revealed to be a Nazi concentration camp guard, accused of atrocities. Hilarity ensues. Okay, I’m lying about the hilarity, but you should see the movie anyway. Winslet is surprisingly moving as the Nazi seductress and David Kross, who plays the teenager, matches her in talent and outdoes her in full-frontal nudity. Rumor has it that there might have been a tear in my eye at the end of the movie, but I will neither confirm nor deny such scurrilous gossip.

Anyway, the movie reminded me that I wanted to follow up on my WWII posts from the summer. Back in August, I mentioned my grandfather’s cousin, Max, who was born in Austria-Hungary and survived internment in a German slave camp during the war. I also mentioned Max’s sex-ay gal-pal Lola, whom he first met back in the Old Country. About a month after that post, my parents, grandmother and I had the opportunity to dine with the Snapple-loving, 90-something lovahs and get more of Lola’s story, but not before we had to squeeze into a too-small car to go to the restaurant, which gave the perpetually naughty Max the opportunity to invite me to sit on his lap.

Lola was the second oldest of five children born to an Austrian mother and a Romanian father. Like Max, she was born in Czernowitz, Austria-Hungary, which later became Cernautzi, Romania, as I described here. She first met Max in Czernowitz — he was three months younger than she was and, as she recalls, “he was a womanizer” with the younger girls. Somehow I wasn’t surprised by that description.

When Lola was young, her family repeatedly moved back and forth between several towns in Romania and Czernowitz. The family first moved to Romania when Lola’s father, Joseph, was transferred there by the insurance company for which he worked. Lola’s mother, Pette, never learned to speak Romanian; at her behest, the family eventually moved back to Czernowitz, which had become part of Romania but was still German-speaking. More moves followed. Ultimately, when the Russian Army occupied Czernowitz in 1940, Lola, her younger brother Robert and older brother Isidore were in Czernowitz. Joseph, Pette and Lola’s younger sisters, Regina and Sylvia, were elsewhere in Romania.

German and Romanian forces seized Czernowitz in 1941. By that time, Lola was married. She still remembers the day she met her husband, Nathan — June 13, 1940 — at the hotel he managed, where she worked as a cashier. They married on April 26, 1941, when she was 27 and he was 33. By the end of that year, the Germans sent the Jews to a Ukraine slave-labor camp. Nathan protected Lola in the camp, she says: “Without him, I wouldn’t be alive.” But Lola’s brother Isidore died from typhus in the camp. Lola and Nathan also lost their son, Mickey, who was born in 1943 and died 15 months later. By the time Mickey died, Germany was losing the war and the camp guards had fled ahead of Russian forces. Nathan had gone too. He joined a Czech fighting brigade, because the Russians liked to send freed prisoners to the coal mines, which was tantamount to a death sentence.

Lola and Nathan had agreed to meet up in Prague after the war but missed each other there. She went on to a displaced persons camp in Munich and was settled in a small village nearby. When Nathan, who was by now in Vienna, heard about the Munich camp, he went there, found out about the village and searched from house to house till he found Lola. His friends told him that he would never find his wife but nothing could stop this guy. When Lola got to this point of the story over dinner, my father pressed her about what Nathan had done to support them after their reunion. Lola said sweetly that Nathan was “a businessman.” When my father inquired further, she conceded that Nathan’s business was selling black market goods. An entrepreneur! Love it. As Lola recalled of the quick-thinking Nathan, “He was very fast in everything, I was very slow.” She and Nathan moved to Vienna, where they lived from 1948 to 1952, and then to Sydney, Australia, where Lola still lives. They never had another child. Nathan died 22 years ago.

Except for Isidore, all of Lola’s immediate family survived the war. Both sisters were supposed to go with Lola to Sydney, but Regina died in a car accident in Vienna a few months before they left. Sylvia did go and still lives just blocks from Lola. As for Robert, he married a woman who was also named Lola. Robert’s Lola had a sister named Dora, who was married to Max, the womanizer from Czernowitz. Robert and his Lola lived in Ukraine till they separated and Robert came to Sydney, breaking the link to Max. “I never dreamed I’d ever see Max again,” Lola said. But, she added, “Do you believe in destiny? I do.” And so it came to be that 45 years after they’d last seen each other, Max and Lola were re-introduced at Max’s granddaughter’s bat mitzvah in New York in 1987. And they’ve been together ever since.

I thought Lola’s story was nicely symbolized by the gold necklace she wears: an “L” for Lola is framed by Nathan’s wedding band, hanging on a chain that Max gave her.

Here is the highlarious photo I took with Max and Lola after dinner. I may be only 5’4″, but I am a giant among 90-somethings. 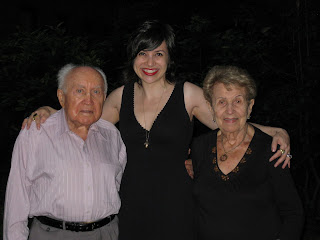 Max and Lola with a giantess in September 2008

While we’re speaking of Lola, there’s Run, Lola, Run and Whatever Lola Wants, but the Lola reference I can’t get out of my head is the Kinks song. El-Oh-El-Ay!

After you’re done singing along to the Kinks, please join me in a round of Happy Birthday. Normally, I don’t blab a lady’s age to the world, but it just so happens to be Lola’s 95th birthday today and I think respect should be paid. Feel free to leave your well wishes in the comments. My father, GeorgeB, will make sure she gets your messages.

You might also like
Happy Birthday to Paul McCartney; Outfits for Ringo
Throwback Thursday: McQueen Top, Now and Then
Going Wide With Frame Jeans and Diane Keaton
« Milagros for Body & Soul
A Note From an Illiterate Guest Blogger »