Brawling, boozing, bragging and child-begetting author Norman Mailer died on Saturday at the age of 84. Strangely, on Friday I’d been musing about the time my now-husband won dinner with Mailer at a charity auction. Mailer was already having health problems then; as I recall, he was using two canes. He looked cute and harmless but I was wary of his reputation for sexism. As a precaution, I told him that if he gave me any trouble, I’d spank him. After that, we spent a pleasant evening discussing our mutual love of pugs. 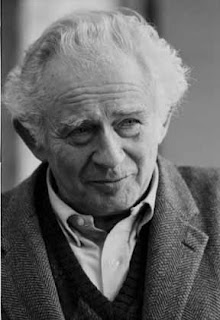 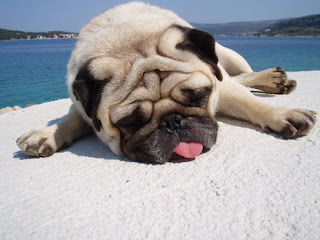 Mailer’s wife, Norris, was charming. She shared some amusing stories about the many times people asked her if her husband had stabbed her. He didn’t stab her! He stabbed an earlier wife. Get your wives straight, people. My condolences to Norris.

I did take a break from the pug topic to ask Mailer about my favorite work of his, The Executioner’s Song, which is about real-life murderer Gary Gilmore. I asked him if he’d read a book called Shot in the Heart by Gilmore’s much younger brother (he hadn’t). I highly recommend both books. Shot in the Heart does make me smirk a little, though not because of the writing. You see, Gilmore’s brother changed the spelling of his name. Makes sense, right? One might not want to be associated with one’s murdering, executed brother. Except he changed his FIRST name, not his last. His name is Mikal Gilmore, formerly Michael Gilmore. I think this is hilarious.

Now that I’ve mentioned the Gilmores, I will also say that one of my all-time favorite songs is Gary Gilmore’s Eyes by British punk band The Adverts. One of the things that made The Adverts awesome was that they had a woman on bass: the punkishly stylish Gaye Advert. 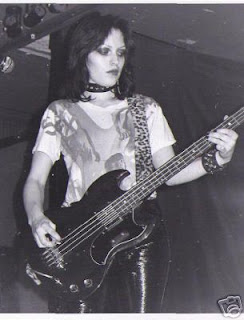 A while ago, I was considering doing a big Music Hum post on The Adverts. I abandoned the idea because, as far as I can tell from my Googling efforts, Gaye completely dropped out of the music business and spends her time supporting partner (and former Adverts vocalist) TV Smith’s career and being a passionate vegetarian. Now, I firmly believe that (1) people should do whatever the fuck they want with their lives and (2) it’s better to be a has-been than a never-was. Despite those two beliefs, something about Gaye’s story depresses me. Hopefully it doesn’t depress her! As long as she’s happy, it’s all good. But she still doesn’t get the big post, just a tip of my beret.

Another woman I’ve been meaning to mention is 88-years-young author Doris Lessing, who won the Nobel Prize in Literature last month. 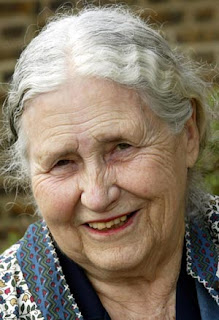 She is the eleventh woman to win the literature prize since 1901. According to nobelprize.org, only 34 women have won a Nobel Prize in any category. The other 743 winners were men. So it’s especially fabulous that Lessing won, since she has been a feminist icon since the publication of her 1962 novel, The Golden Notebook. As the New York Times reported, “In its citation, the Swedish Academy said: ‘The burgeoning feminist movement saw it as a pioneering work, and it belongs to the handful of books that informed the 20th-century view of the male-female relationship.'” I will still give Lessing her feminist props even though a few years ago, she complained that women are now pushing men around too much. Frankly, on my planet, that isn’t true and the fact that she said this kind of makes me want to cut her. To calm myself, I will take a moment to caress my copies of Backlash and Sisterhood Is Powerful. Be right back.

Okay, I’m back. Just as a reminder, feminism is defined in the dictionary as “the theory of the political, economic, and social equality of the sexes.” It says nothing about biological equality, which we all know is impossible because men are cursed with an organ that makes them act like idiots. There are no rules against wearing lipstick and a bra, getting married or having children, though I firmly believe that people should be forced to earn some kind of license before they’re allowed to have kids because I have encountered too many screaming brats, usually in the row behind me on JetBlue. As I said above, a feminist like me says, “Do whatever the fuck you want with your life,” unless you are Gaye Advert, in which case I will find your choices inexplicably depressing. I guess I just feel leather pants, heavy eyeliner and guitars are worthy of a lifelong commitment. Let us all take a moment to admire committed rocker badass Joan Jett. 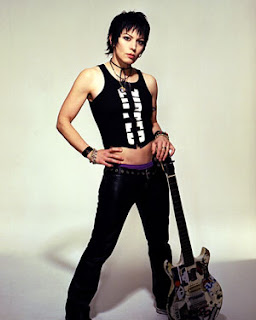 Anyway, The Golden Notebook was never my favorite Lessing work. I prefer her first novel, The Grass Is Singing. All you sex-ay bitches need to read it! Or I’ll give Joan Jett your names! I bet Joan puts my ass-beatings to shame, so I’m going to outsource some of them to her.

Fascinating, radically feminist, and possibly inactive blog of the day: I Blame the Patriarchy. This blog will cut you if you mess with it.