I’ve been so busy with Sex and the City 2 that I didn’t get to share some pictures from a great Ting Tings concert a couple of weeks ago. The show was part of a series of free concerts sponsored by Microsoft’s new line of KIN “social phones.” “Social phones” sound to me like phones that get together and talk among themselves. I don’t really like talking on the phone, so I would be happy to delegate that task to a phone. It would be especially rewarding to delegate conversation to my iPhone. Then I could be all like, “Ha ha … call failed? Well, now you know how I feel when I try to use you, iPhone!”

The KIN peeps did a kind of information striptease, revealing concert details on Facebook for a week until they shared the final location a couple of hours before the show. (In my case, gorgeous blogger Jordana of Clutch 22 — who is working with the KIN people — hooked me up with tickets. For another post on the evening, read Midtown Girl.) KIN’s concept was using social media to bring people together in the real world, which reminds me of my mother yelling, “Turn off the TV and go outside and play!” Do parents still chase kids outdoors these days? Or are they so preoccupied with Second Life and online porn that they don’t care if the kids are glued to the TV?A  Personally, I was happy that I dragged myself away from Law & Order reruns for an evening because the Ting Tings put on a great performance. As a bonus, when I was uploading these pictures, I imagined the Count from Sesame Street counting Tings. 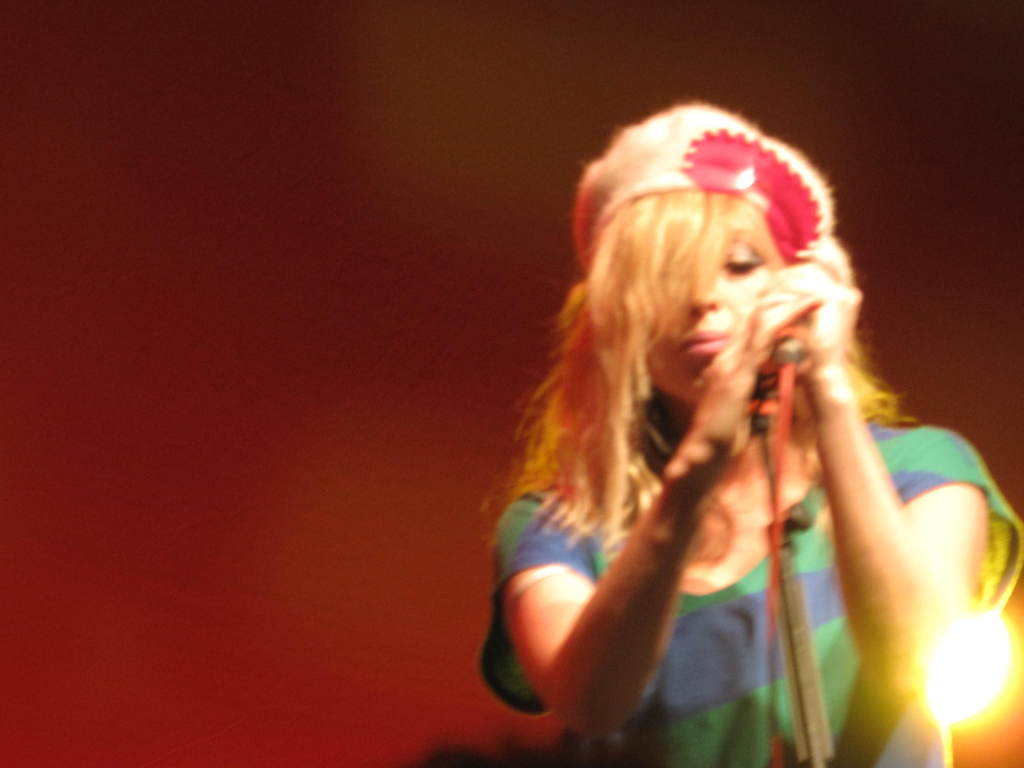 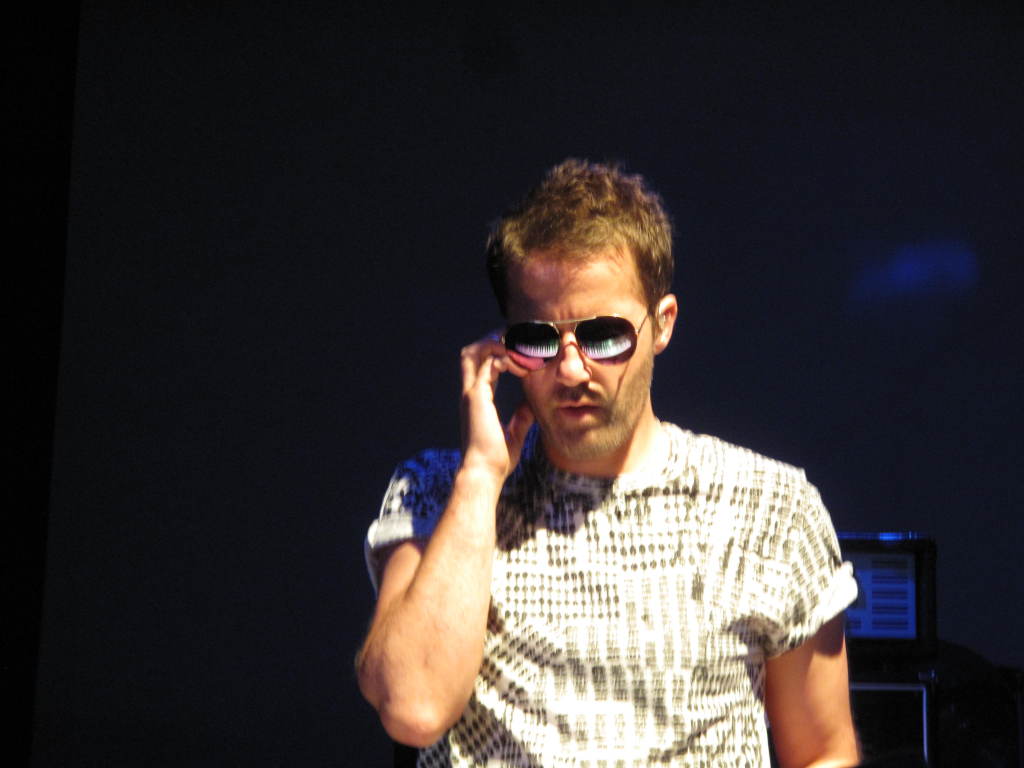 Admittedly, counting two Tings wouldn’t be much of a challenge for the Count, who has been known to handle as many as 20 honks.

I find something disturbing about the Count’s increasing excitement over the honks in that video, not to mention the nose-smashing, but to each his own.

Before the concert, my gorgeous artist friend Natasha Zupan took me to see Richard Prince’s t-shirt paintings at Salon 94 Bowery. They’ll be there till June 26, so stop by and take a look if you’re in town. I was amused to see a shirt with an image of the late actor Bob Crane on it because Crane had recently been on my mind. 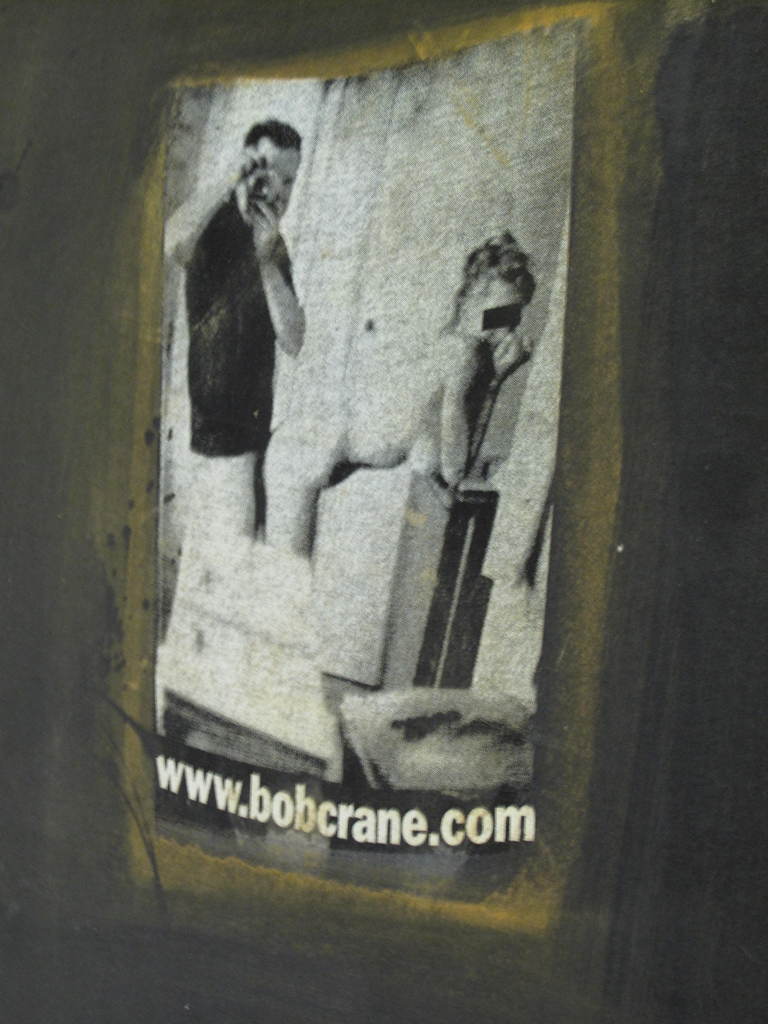 I was hoping to make an outfit post out of this but someone (hello, Natasha!) didn’t send me the photo she took of me so here’s one I took of Natasha instead. 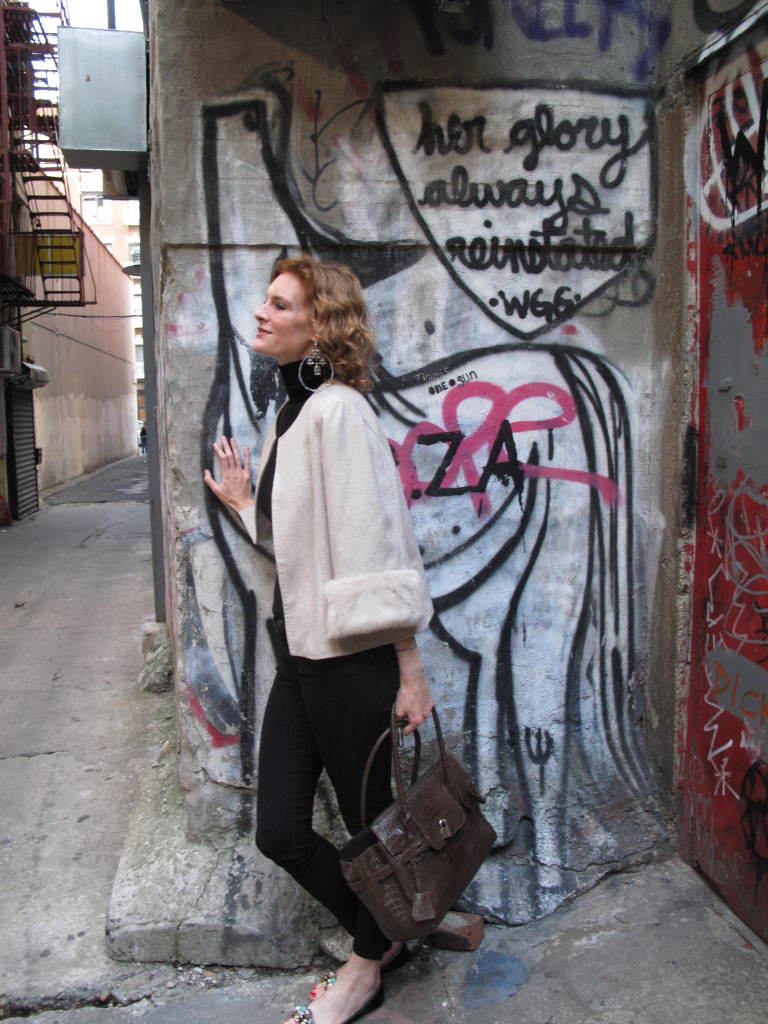 Natasha striking a pose with some graffiti.

Blogging lesson learned: Always take the outfit photo with your own camera!

Another blogging lesson: Don’t believe any hosting company that says your site might be offline for a mere hour during a server upgrade. After I was knocked offline for four hours and my programmer called to complain, the support people told us to expect 24 to 72 hours of no blog! Luckily the outage only lasted about 12 hours, but it was still far longer than I wanted or expected. Apologies to anyone who tried to visit during that time and got a big nasty error message instead.

UPDATED JUNE 30 TO ADD: Much to my amusement, the KIN has been discontinued after 48 days. I’m glad I got a good concert out of it before it went!