I went to the New York Women In Communications Matrix Awards on Monday to see MrB present an award to the lovely and talented Monica Langley of the Wall Street Journal. The awards honor “extraordinary achievements of outstanding women in the communications industry,” and they’re quite a big deal. Another one of the honorees was Sherrie Rollins Westin, chief marketing officer for Sesame Workshop. She was serenaded by Elmo, which led to this report in WWD:

For all of the star power in the room during the annual New York Women In Communications Matrix Awards Monday afternoon, the real scene stealer was a small red furry surprise presenter Elmo. He popped up to help congratulate Sherrie Rollins Westin, executive vice president, chief marketing officer for Sesame Workshop for her honor, and sang a rousing version of  “Sherry Baby” that had ProPublica editor in chief and former Wall Street Journal managing editor Paul Steiger dancing in his seat.

Ha! I missed MrB’s seat-dancing moment. I guess my eyes were on Elmo. There were a lot of other famous faces — including Julianne Moore, Jessica Lange and Tom Hanks — but I was most impressed by S. Epatha Merkerson, who plays Lieutenant Anita Van Buren on Law & Order. That woman has spent real quality time with actor Sam Waterston and his amazing eyebrows. I’m jealous!

The New York Women in Communications Foundation is all about encouraging women to do their thang, and for that reason it distributes “scholarships for students who demonstrate the desire and talent to become leaders in their chosen communications fields.” I’m auctioning my fabulous Pineapple Necklace to help the cause. Do a good deed for women and bid on it here. 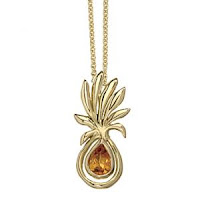 You know you want it!