I’m so sad to read that actor Andy Whitfield, the star of the first season of Spartacus, has died of non-Hodgkin’s lymphoma at age 39. 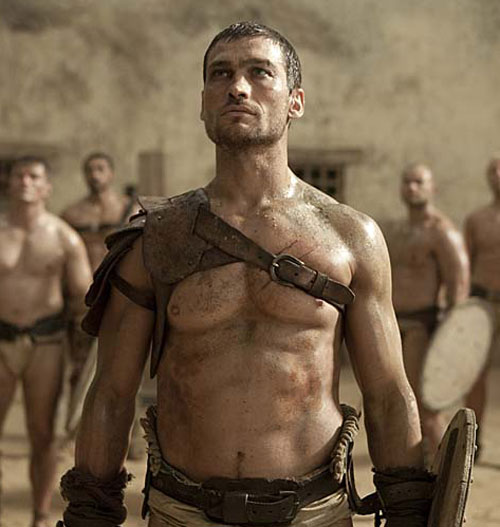 My stepdaughter and I watched when Spartacus premiered on STARZ in January 2010. The first episode was truly terrible — something that deserved a “Worst!TV!Show!Ever! comment — yet something drew us back for the second episode. It must have been the full-frontal nudity (male and female) and graphic violence. Miraculously, the writing got better and better and we became totally addicted. After a while, we would have watched the show just for the plot and characters. But we got to have our cake and eat it too, because there were great scripts AND sex and gore. Woot!

When Andy, who played Spartacus, was diagnosed with cancer, it didn’t seem too bad at first. The producers obligingly delayed the second season and produced a prequel mini-series while they waited for him to recover and come back to work. Then, alarmingly, he took a turn for the worse and was replaced with actor Liam McIntyre for the coming second season. But I still thought Andy would pull through, because … well, look at him! How can you not envision him with a sword in each hand, slicing and dicing cancer’s ass while looking fabulous in a tiny loincloth? Alas, it was not to be.

We’ll miss you, Andy Whitfield! You’ll always be the real Spartacus to us.

You might also like
Crossing My Fingers for Eminem, Lady Gaga at Grammys
"Style, Interrupted": A Tribute to Charles Nolan
For Doors Stans: Pamela Courson's Mother Has Died
Previous Post: « 10 Years Later: The Weak Horse
Next Post: In Case You Missed This Weekend’s Posts … »