“Pictures lie.” That’s what my hairstylist once told me when I was complaining that I had just discovered I looked craptastic thanks to a photo. I hope this one is lying its ass off. I’m just sharing it to show a different look (though not a different pose) from the Ossie Clark printed dress look. 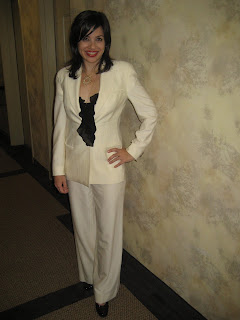 Photo by my husband, whose photos generally produce a lot of angst and complaints.

I wore this four-year-old white Versace suit to a party last night. Some guy told me I look like Liza Minnelli, which was not exactly the #1 compliment of my life.

Embed from Getty Images
The party (co-hosted by my dear friends at the Wall Street Journal…thanks, Andrea!) was in honor of Alek Wek’s memoir about life as a Sudanese-refugee-turned-model. The excerpt I read in Vogue was quite fascinating, so check out the book here. Surprisingly, there’s a mini-genre of refugee-turned-model autobiographies. Previous works include Waris Dirie’s book, Desert Flower, and Irina Panteava’s Siberian Dream. I would say Naomi Campbell’s fictional Swan doesn’t count towards this reading list. But if you are looking for a rags-to-model riches-to-rags biography, Thing of Beauty about Gia Carangi is a tragic classic.
Embed from Getty Images

UPDATED TO ADD: There’s a picture of me by fabulous photographer Patrick McMullan on his site. I can’t link to it directly but you can see it if you search for “alek wek wendy brandes.”  Also, you’re a survivor of the ’80s, or merely a fan, you MUST get Patrick’s book so ’80s. One of my stepdaughters got it for me (it was on my wishlist) and she was so fascinated by it that she bought it for herself … even though she grew up in L.A. and was unfamiliar with the many New York scenesters pictured!

Patrick also thrilled me by asking my husband, in my presence, “Is your wife coming tonight?” BWAH! I was so excited that I looked like a girlfriend rather than a wife. It went a long way towards easing the heartbreak of the Liza comment. 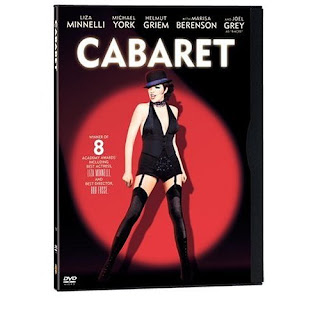 Don’t get me wrong. I love Liza! Cabaret is one of my favorite movies and she looked damn sexy in it. I used to get the Liza comparison all the time when I had her Cabaret hairstyle. But it sure took me by surprise last night. And … let’s face facts. Wouldn’t we all rather get a Sophia Loren comparison than a Liza?

I will never look like Sophia Loren. It’s a burden I must bear.

You might also like
Best Performance at the 2018 Grammys
On the Town: Huffington and Didion at Columbia Spectator Dinner
My Oscar Gown Archives, Part II
Previous Post: « You Can Kiss Her Ass!
Next Post: Great Minds Think Alike … About Foldover Bags »