Summer doesn’t really end for a few more weeks, but Labor Day weekend marks the unofficial end of the season in the U.S. It’s time for kids to go back to school and, I figured, a good time for me to look through the summer’s draft blog posts to delete anything that’s grown stale.

That’s when I realized I’ve had a Kelly Clarkson weight story kicking around since the singer got a bunch of magazine covers touting her slimmer shape in June. Happily, a story about Clarkson’s fluctuating weight is timeless because the press always has its collective eye on the poor gal’s waistline. In November, for instance, I wrote a post called “Sucks to be Kelly Clarkson” after the New York Times ran “Kelly Clarkson, a Pop Star Proud in Her Own Skin,” about Clarkson’s girl-next-door qualities. The Times interviewed Courtney E. Martin, author of Perfect Girls, Starving Daughters, who said:

“For any woman to not only own her body size at an average woman’s weight is amazing, let alone to own weight gain without shaming and stigmatizing it publicly. It’s a difficult line to walk because Kelly’s private. She doesn’t want to be known as the fat activist pop star. That’s not her mantle.”

Even though the attention being paid to her weight in that story was positive, it seemed burdensome to me. I wouldn’t want people looking at my body in order to make themselves feel better (or worse). I wondered:

“What if Kelly develops a passion for triathlons and becomes a total hard body?”

I was close! Kelly didn’t take up triathlons — but she did get into boot-camp cardio, strength-training, a healthier diet and portion control that helped her lose either 30 lbs. (according to US Magazine’s four-page cover story) or 40 lbs. (according to Life & Style, which only gave her two pages. Bitches!). As you can see from the cover of US, a new romance proved inspiring. 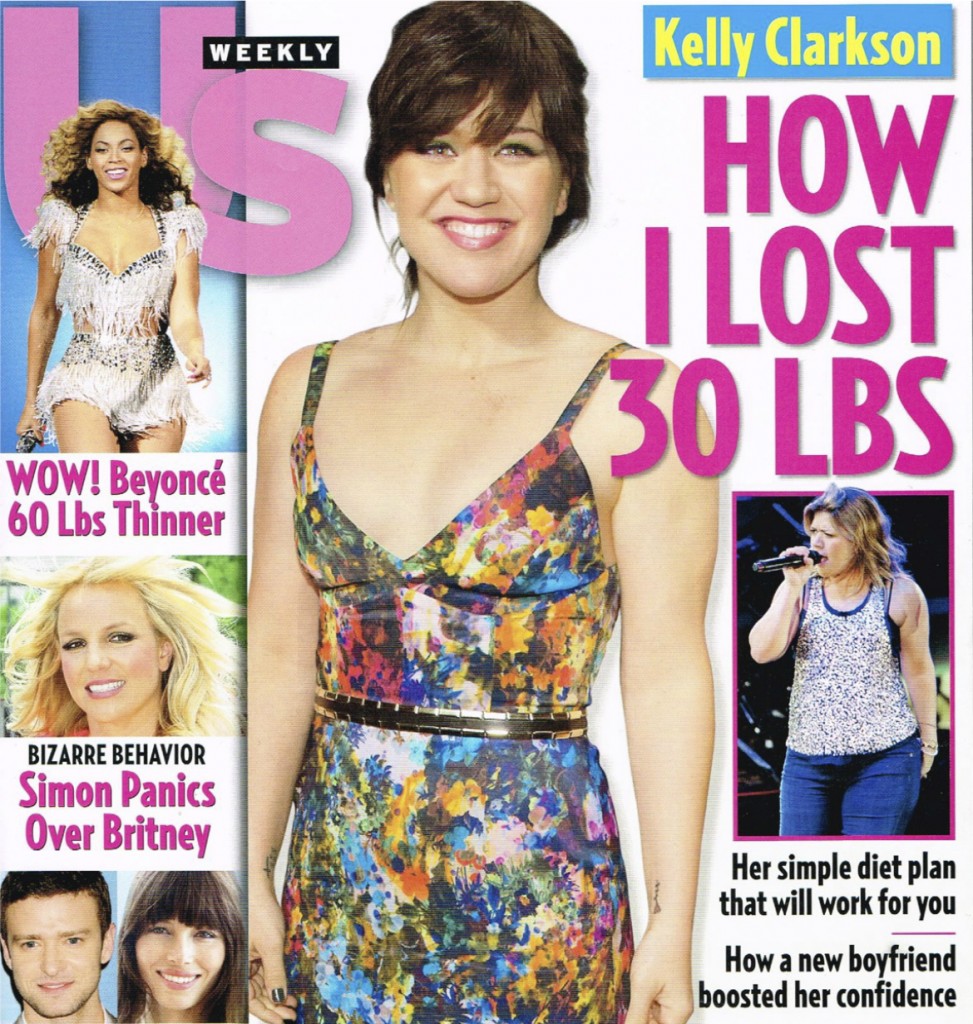 This isn’t something the magazine made up. Clarkson credited her talent-manager fella Brandon Blackstock herself. While promoting her singing-competition show, Duets, in a May conference call, she said, “I have a boyfriend, and if I’m being completely honest, no one likes to be not toned when you are dating someone,” reported People. She got a cover from Redbook too. 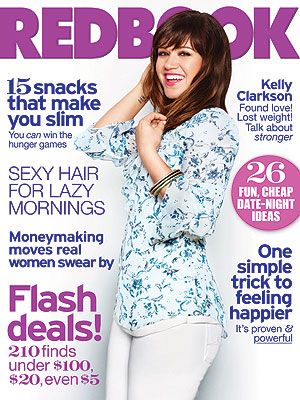 True to her past statements about weight, her message continues to be about self-acceptance; she’s not getting into thinspiration territory. Clarkson told Redbook, “Really, what I try to instill in my fans is to be healthy and happy. I have no desire to be super-skinny.”

You know, I would suspect a lot of celebrities of doing this kind of thing on purpose. If you gain a little weight, you get a magazine cover; if you lose a lot of weight, you get a magazine cover. If you gain lots and lots of weight, you get a Weight Watchers/Jenny Craig/Nutrisystem deal, or maybe you get on Dancing With the Stars. Either option should land you multiple magazine covers. But Kelly doesn’t seem like a cynical, Hollywood type, so I’m inclined to believe her when she says it’s natural for her: “I’m eating better and working out, but I’ve always fluctuated within 20 lbs. … My whole life I’ve been like that.” Still, I wouldn’t be mad at her for a minute if she did take advantage of the public obsession with her weight to promote her projects. If folks are going to annoy her about her avoirdupois, why shouldn’t her television show benefit? Maybe she’s laughing an evil laugh while eating Cadbury Dairy Milk and plotting her next magazine cover right this second, in which case she and I are psychically connected, because that’s exactly what I’m doing right this second, except for the magazine thing. Stars! They’re just like me!Anyway, if Kelly wants to cash in with a weight-loss campaign one of these days, the perfect theme song would be her cover of Eminem’s “Lose Yourself.” She performed this in Detroit last month. There’s a lot of video of the performance, but I like this one because it was recorded by Eminem’s brother. Thanks, Nate Kane!

No charge for the idea, Kelly!