I took guitar lessons for eight years. I didn’t become proficient because I never practiced. I would get out my candy-apple red Fender Strat exactly once a week when I trudged the ten blocks to see Ed, my good-natured guitar teacher. I kept this up until I left the corporate world and started working for myself, at which point I fell prey to the time-warping qualities of the unstructured life, wherein the more time you have, the less you manage to do with it. Never did learn French either.

Anyway, I often consider going back to lessons with Ed. During these considerations, I also think about British comedian/actor/musician Dudley Moore. Dudley first came to prominence as a writer and performer of the 1960s theatrical comedy revue Beyond the Fringe, which played London’s West End and then Broadway. In 1965, he and a fellow Fringe participant, Peter Cook, moved to television, with a comedy sketch show called Not Only…But Also, which aired on the BBC (pre-Monty Python, mind you). The show was so big that John Lennon made a guest appearance in 1966.

But despite all this success, Dudley was best known for becoming an unlikely Hollywood star with the 1979 movie 10, which also popularized cornrows, Bo Derek and doing it to Ravel’s Bolero.

In 1981, Dudley had another smash, starring as a rich, alcoholic playboy falling for a blue-collar Liza Minnelli in Arthur.

Dudley was never as hot again as he was in those years, despite doing Arthur 2 in 1988. Standing just a touch over 5’2″, he became better known for being “Cuddly Dudley” and “The Sex Thimble,” always romantically attached to a beautiful, much taller woman. By 1996, his career was declining. He seemed to the world to have become Arthur — drunkenly slurring his speech, losing his balance, forgetting his lines. In actuality, he had a degenerative brain disease called progressive supranuclear palsy, from which he suffered terribly until it finally killed him in 2002.

My favorite Dudley work isn’t any of those I listed above. I prefer the intensely obscene and rambling Derek and Clive comedy albums he and Peter Cook did in the ’70s. I only discovered these after Ed, the guitar teacher, thought I had called him a “wanker” when I had, in fact, called him a “winker.” (Oh, come on! You should have known I was going to get back to Ed eventually. Have a little faith.) This reminded him of the Derek and Clive “Having a Wank” recording, which he eventually located on tape and brought in for one of our lessons. We spent the entire hour listening to the tape and screaming with laughter. I ended up lying on the floor because I became too weak from hysterics to sit up. It was the best lesson we ever had.

Clive: “…grabbing hold of the carpet, being sick in the ashtrays….a run-of-the-mill Wednesday 9 o’clock wank.”

In 1979, Dudley and Peter filmed their Derek and Clive recording sessions. This is from Derek and Clive Get the Horn. Watch Dudley crack up as Peter describes how the dead Pope gives him the horn.

Clive: “You’re not allowed to fuck a door unless it’s 16 years old.”

Did you check out Peter’s tinted glasses? I swear, those glasses give me the horn! They do! I’m not ashamed. Seventies-style glasses on a dude are hot. In that clip, Peter Cook reminds me of comic-turned-actor Richard Belzer when he was young. Young Richard Belzer totally gives me the horn. 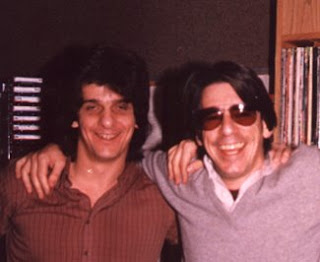 Young Richard Belzer is on the right.
Image source is here.

In fact, old Richard Belzer gives me the horn. I know this is a shocking statement, but it takes all kinds to make the world go ’round. 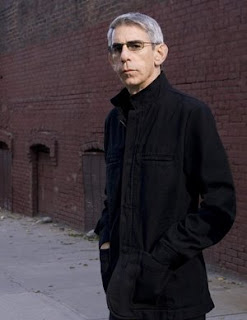 I’d love to keep going with this post, but there are 14 members of the Russian secret police positioned around the room, disguised as wallpaper, and they want to talk to me about Richard Belzer until MrB walks in. Gotta go.

You might also like
Minx by Tracylee Percival, Medici Poison Ring by WendyB
The Beatles in Skinny Jeans in Hamburg
I Can See Clearly Now
Previous Post: « Going Back to Cali
Next Post: Too Much Is Never Enough »