Sure, she was a wreck for years, but people have come back from worse places, so I always hoped Amy Winehouse would pull herself together. Like MichaelK of Dlisted said, “I thought Amy Winehouse would outlive us all and make a million more albums and throw spit bombs at a million more bitchy fans. You know, like Keef Richards or Courtney Love.” Unfortunately, it wasn’t to be, and the talented and troubled singer has joined music’s sad 27 Club. 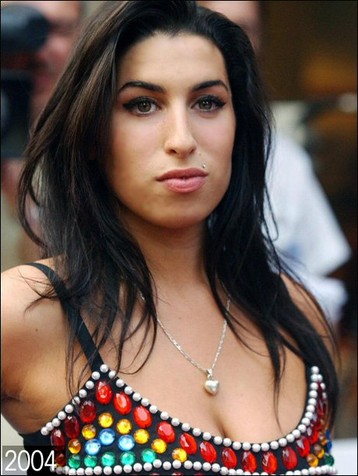 Young and healthy Amy Winehouse, before the effects of addiction.

The first report I saw was a tweet from Sky News. In these days of hoaxes and hackings, one report does not a celebrity death confirm, so I tweeted asking if anyone had seen independent confirmation. I was flooded by tweets saying this newspaper reported it, that newspaper reported it, etc. But if a thousand websites all refer to one report, you have just that: ONE report. Eventually — and unfortunately — the police confirmed that “a 27-year-old woman” had died at Amy’s flat and I had to believe. So disappointing. I will always treasure her music, her beehive, her awesome eyeliner and her “Blake incarcerated” Grammy speech.

UPDATED TO ADD: Here’s another nice photo of Amy from 2003.

You might also like
Words of Fashion Wisdom From Xtina
Norris Church Mailer and the Importance of Newspapers
Wish List: Inspired by Gwen Stefani
« Fourth Blogversary
Get Smart (About the Price of Gold) »