I enjoyed this piece by the Washington Post’s Pulitzer-Prize-winning fashion critic, Robin Givhan (registration required), though I disagree with the constantly reinforced notion that everyone, “in the boardroom, in politics, in suburban neighborhoods,” is feeling unbearable daily pressure to meet some Hollywood standard of physical perfection.

Barbie is a popular scapegoat.

I live in New York. Every day, I see happy people of all shapes, sizes, ages and colors (I said they’re happy, not friendly!), but relatively few human Barbies. Most people I know want to look the best that they can (people have always wanted to look attractive) and some of them will take advantage of all the new ways of achieving this.

But I think that the phenomenon of comparing yourself to a doll, model, actress or the most popular girl in school is most common among pre-teens and teenagers. That was true 25 and 50 years ago too. Hormones make you crazy. That’s why you’re able to spend two hours a day doing your hair for eight years, and 25 years later, if it takes you five minutes, that’s too long. A lot of people grow out of comparing themselves to specific celebrities or models after that self-conscious phase ends. Of course, there ARE people who never grow out of it, but the causes of their psychological issues go far beyond exposure to reality show makeovers and attractive models on billboards. 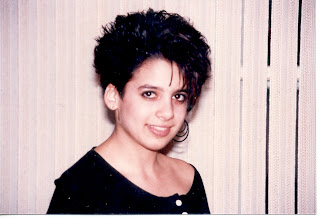 Yes, this is a picture of me as a teenager. It took me at least an hour to do that hair. I was all Tony Manero about it.

I do agree with Givhan’s comments on the hypocrisy of people’s opinions on beauty. Basically, I’m tired of blame-deflecting. It’s accepted that the “media” are guilty of over-emphasizing appearance, but all over teh Interweb, you see regular people unleashing more vicious criticism than any magazine would. I am sure that Vogue, or Star for that matter, has never said someone should “just DIE!!!” for flaunting her chimichanga region in her too-short dress, but people feel free to say it online. And forget getting older in the age of blogs. As Givhan says, “Most people in the public sphere do something, Botox to boot camp, to fend off the effects of time. They are encouraged and expected to take action. If they don’t, they will be judged harshly. But they must take care not to let the effort show — don’t reveal any hairline scars or improbable perkiness. Otherwise, our judgment will be even harsher.” A lot of people speculate about Nicole Kidman’s face, but as far as I know, she’s only been called “Granny Freeze” outside the “mainstream media.” 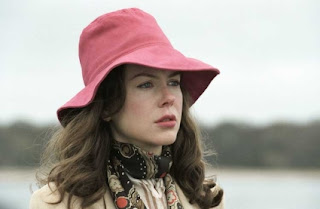 I’m also weary of the people who are most savvy about the use of Photoshop screeching that they’re being victimized by big, bad magazines whenever a “before” photo is found. Would they prefer that magazine covers look like they were shot by the DMV? Do we need to go back through old Hollywood movies and eliminate the lighting that made everyone gorgeous? I also detect too much glee in the way the editorials are shocked … SHOCKED!!!! … by the fact that Redbook hid Faith Hill’s wrinkles; everyone has far too much fun pointing out the fact that she has ’em.

My personal philosophies are:

UPDATED TO ADD: The L.A. Times has a great story on my husband’s new project (registration may be required). Isn’t it annoying how the most outrageously biased people are constantly accusing everyone else of being biased? If you didn’t think Rush Limbaugh was an asshat, his quote should convince you. And I’m not crazy about the jackhole from Slate either. But I think this story makes it perfectly clear that the people funding this project are committed to nonpartisan journalism. My husband would never work with them otherwise!

ALSO: The Wall Street Journal has a whole section on 50 Women to Watch in business, plus a good column by Carol Hymowitz on women helping other women in the work place. I like this paragraph: “The ‘queen bee syndrome’ — the belief that ambitious women strive for the most powerful position in the workplace while excluding all rivals — is outdated, executives say. Equally outdated is the notion that women can’t have both powerful jobs and fulfilling personal lives.” Told ya.

You might also like
RIP, Elizabeth Wurtzel
Throwback Thursday: When Havoc Struck
Hot for Jeremy Scott, Sympathetic to Nicki Minaj
Previous Post: « Thanks for Thinking of Me, Roxanne
Next Post: Even More Surprise Party Pictures »