I’m going to interrupt my series of posts on the six wives of Henry VIII, or “King Henry teh 8” as he is known to Googlers. I must write about Queen Isabella, because the necklaces I named for her have just been finished.

Isabella, a daughter of Philip the Fair of France, was born in 1292. She has become known as “Isabella, the She-Wolf of France.” Shakespeare invented the She-Wolf title for Margaret of Anjou, but in the 18th century an English poet used it for Isabella and she’s been stuck with it ever since. I feel the sobriquet is unfair, yet I couldn’t resist the image. I’d seen necklaces where a wolf etched into a wolf’s claw. I thought a fang was sexier. A big giant fang that didn’t have to be pried from a real wolf (they hate that)! So with apologies to the queen, I present the Isabella Wolf-Fang Necklace in 18K gold.

Besides She-Wolf, Isabella has been called (by men, of course) a Jezebel, a harridan, “unnatural,” “evil,” “inconstant,” yada yada yada, for betraying her supposedly saintly husband.

Isabella got into this mess when she married King Edward II of England. While the couple had four children, Edward was notorious for directing most of his romantic energy, much of the treasury and a big chunk of English land to his male favorites. Isabella remained faithful through years of neglect, abuse and outright abandonment. She eventually became convinced that her husband planned to murder her. At that point, she wangled a trip back home to France to visit her brother, King Charles IV. 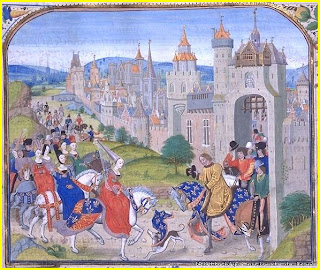 Charles IV greets Isabella:
“My, what a big, pointy hat you have!”
Image from Hereford-Heritage.com

Ah, Paris. It’s so romantic. Isabella fell for Roger Mortimer, a disgruntled Welsh noble (and one of the few people ever to escape from the Tower of London). The relationship was hot and heavy and all the other nobles were walking around thinking, “Get a room, please!” Okay, I made that up. But it is true that the relationship was obvious. It was also scandalous because kings get a free pass on adultery and queens do not. The sexy couple became the Rogerbella of the French court. At home in England, Edward, egged on by his man-friend, Hugh le Despenser, refused to cooperate with Parliament. The fact that he had lost expensive and humiliating battles with England’s longtime enemy, Scotland, didn’t do much for his popularity either (Braveheart is about the earlier days of that ongoing war.). Civil war threatened.

Rogerbella ultimately led an invasion of England, overthrew and jailed Edward, and set themselves up as regents for Isabella’s son (another Edward). They executed Hugh le Despenser in a perfectly acceptable 14th century way: they dragged him through the streets, stripped him, hanged him, cut him down before he died, chopped off his penis and testicles, threw his manhood in a fire, cut him open, threw his heart and entrails in the fire, and cut him into four pieces. Then they had a party. Good times! Here’s a delightful rendering of the event. 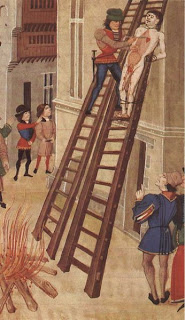 This was considered appropriate justice as well as quality entertainment, and the populace loved Rogerbella. But, as Lord Acton said centuries later, “Power tends to corrupt, and absolute power corrupts absolutely.” Roger became as greedy and murderous as Despenser, if not worse, and Isabella deferred to him. When the imprisoned Edward II died, the rumors flew that he was murdered (and years later, the story was embellished to an unseemly murder with a red-hot poker). With his death, Edward’s reputation improved and Rogerbella’s declined, until the latter were overthrown by Isabella’s son in 1330. Roger was dragged through the streets, stripped and hanged. Legend says Edward III locked his mother up until she lost her sanity, but in reality he was a doting son. Blaming everything on her bad boyfriend, Edward graciously kept Isabella in the lifestyle to which she’d become accustomed. She had plenty of palaces, visitors, clothes and, most importantly, jewels until she died in her 60s. Her son threw her a wonderful funeral.

If you’ve gotten to this point in the post, you’re probably thinking there is nothing more to say about Isabella. Wrong! There is so much more … more books, films and television series than I can list here. These are just a few reading recommendations:

There will be a test on this next week. Please bring a No. 2 pencil.