I just can’t stop adding stud earring designs to my WENDYB by Wendy Brandes line! Last week, I introduced my Heisenberg hat stud in honor of Breaking Bad‘s finale. Now, in time for Halloween, I’ve got a miniaturized earring version of the skull design that first appeared in my Juana peekaboo skull ring and Juana locket, inspired by the 16th-century queen known as Juana la Loca. Here is the original 18K-gold poison ring, shown both open and closed … 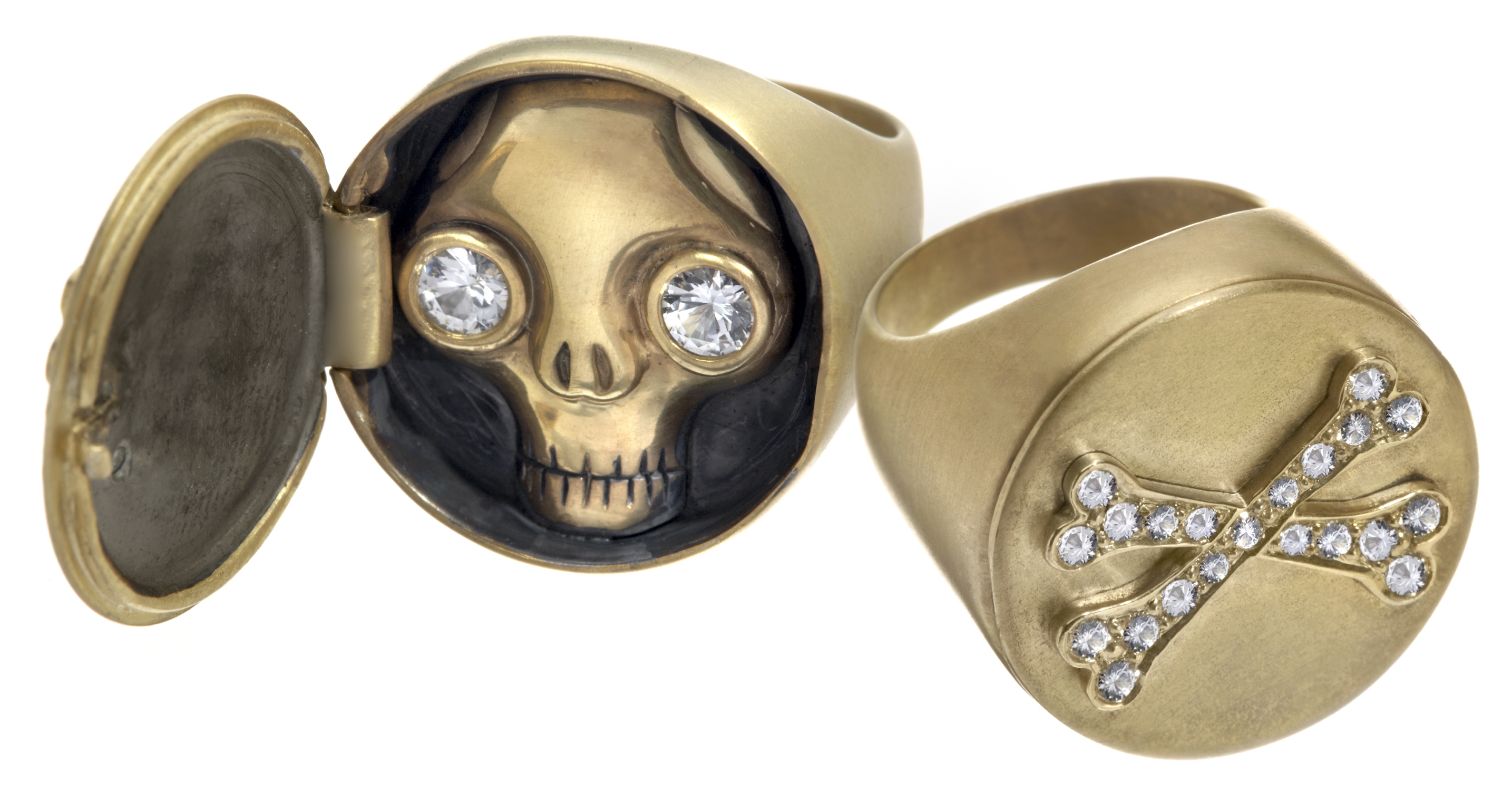 … and here are the new stud earrings, in 18K gold with diamond eyes. 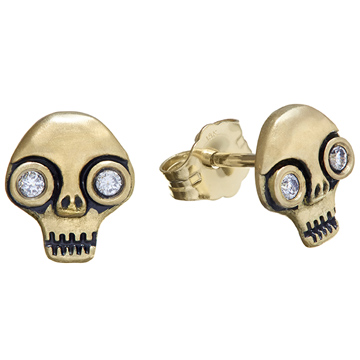 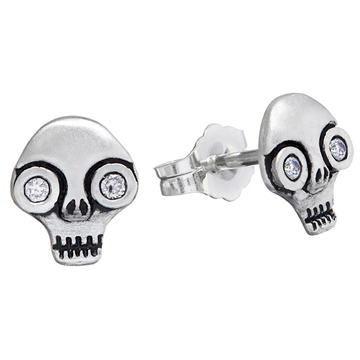 If you’re as into the single-earring look as I am, you can buy a single gold or single silver skull earring, rather than a matched set. That allows you to mix the skull with one of my other studs to create your own pair. Allow me to suggest one of my other new studs: an anatomical heart in sterling silver (you can special order it in 18K gold). 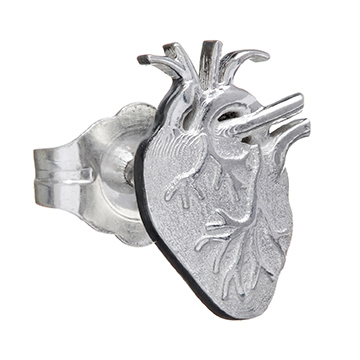 Anatomical heart stud earring. $35 for a single. Click to purchase.

My tiny stud earrings are getting more elaborate. You can see raised areas on the heart as well as both shiny and matte finishes. Having two textures was crucial for my third new design, a sterling-silver pill stud that was partly inspired by the emoji pill. 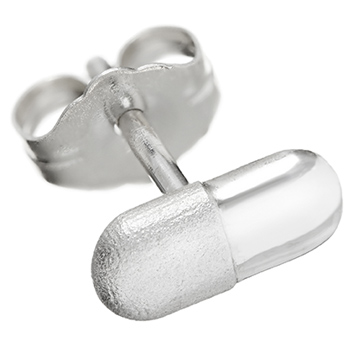 My silver emoji-inspired pill earring. $35 for a single. Click to purchase. Email me at wbjewelry at hotmail dot com to special order a gold version.

The emoji uses two colors to give it a capsule-like look. 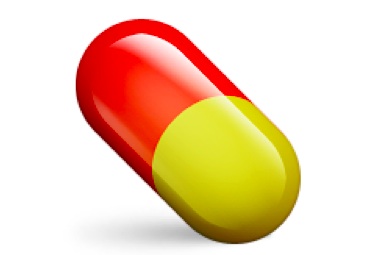 Without two textures, the earring would look more like a plain oval than a pill.

The emoji wasn’t the only two-hued inspiration for the pill earring: the other was, appropriately enough for October, a tombstone. But I’m not talking about something you’d find in a graveyard.  A “tombstone” is the name for a type of newspaper advertisement placed by an investment bank when a deal closes. The banks like to turn those ads into tangible souvenirs for people involved in the deal. Sometimes the gift is simply the tombstone in a hunk of lucite, but it can be more elaborate as well. When I started working at the hellish, now-defunct investment bank Lehman Brothers in 2000, I became enthralled by a pill-shaped tombstone creation marking a 1999 pharmaceutical industry deal. It had been left in the graphics department, and I coveted it because that company really made me want to take a huge pill. When I left Lehman in 2005, a friend in graphics gave me the tombstone as a going-away present. I still have it! 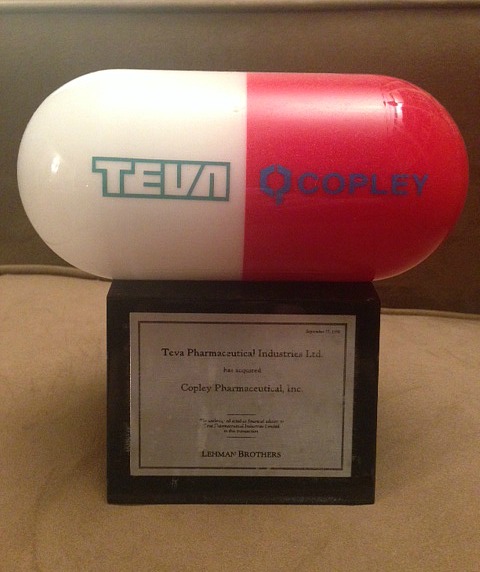 What I really love about this thing is that the pill comes off the stand.

For your big investment-banking headaches!

I stuck with my hospital theme — body parts and medication! — for the final new earring design of the month.  The emoji syringe was the logical companion for the emoji pill. 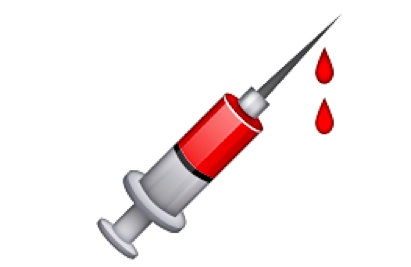 I did the earring version in gold … 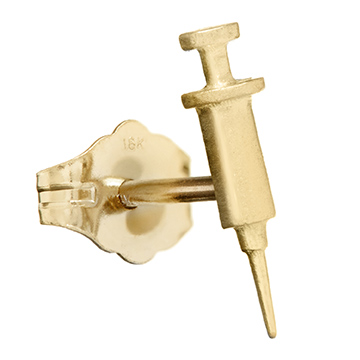 18K gold syringe stud earring. $225 for a single one. Click to purchase. 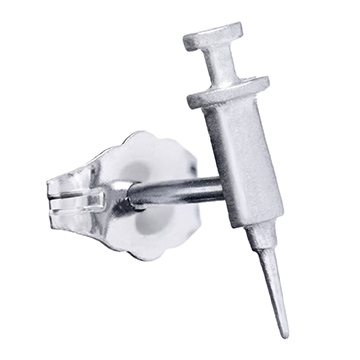 Syringe stud earring in silver. $35 for a single. Click to purchase.

It was tricky to get the “needle” as thin as it needed to be to make the syringe look right, but I did it!

The theme song of this Jewel of the Month post is clearly Dr. Dre’s “I Need a Doctor,” which features Eminem and gorgeous jewelry customer Skylar Grey, who wrote and sang the chorus.

Come back next month for two more stud earring designs — I’m swear, I’m addicted to them!

You might also like
Be Pretty in Pink for Less
Wendy Brandes Jewelry in K-Note Magazine
The Venus Necklace
Previous Post: « Throwback Thursday Gladiators, Plus More Miley & Madonna
Next Post: I Love My Peeps »