One of my favorite wicked royal ladies is the 7th century’s Wu Zetian, the only female emperor of China. She became known as Empress Wu after her death, but she ruled under a name she chose for herself — Emperor Shensheng.  I wrote about her in 2007:

Empress Wu is the kind of gal who simply must have a jewel named after her. Last year, I started working on a very elaborate mechanical piece in her honor. While I was slaving over the elaborate piece, my designing friend Zang Toi asked for dragon cufflinks. That was all the excuse I needed to temporarily set aside the high-tech Wu tribute to do a somewhat lower-tech one. I admit that I don’t like it when Wu is called a dragon lady because she wasn’t any more murderous than the male rulers of her time. If she’s going to be called a dragon lady, they should be called dragon men, no? Still, dragons are a powerful symbol in Chinese mythology and culture, and Wu deserves a jewel that properly represents her badass-ery.  As you can see from Zang’s links, below, “low-tech” for me is still very elaborate. 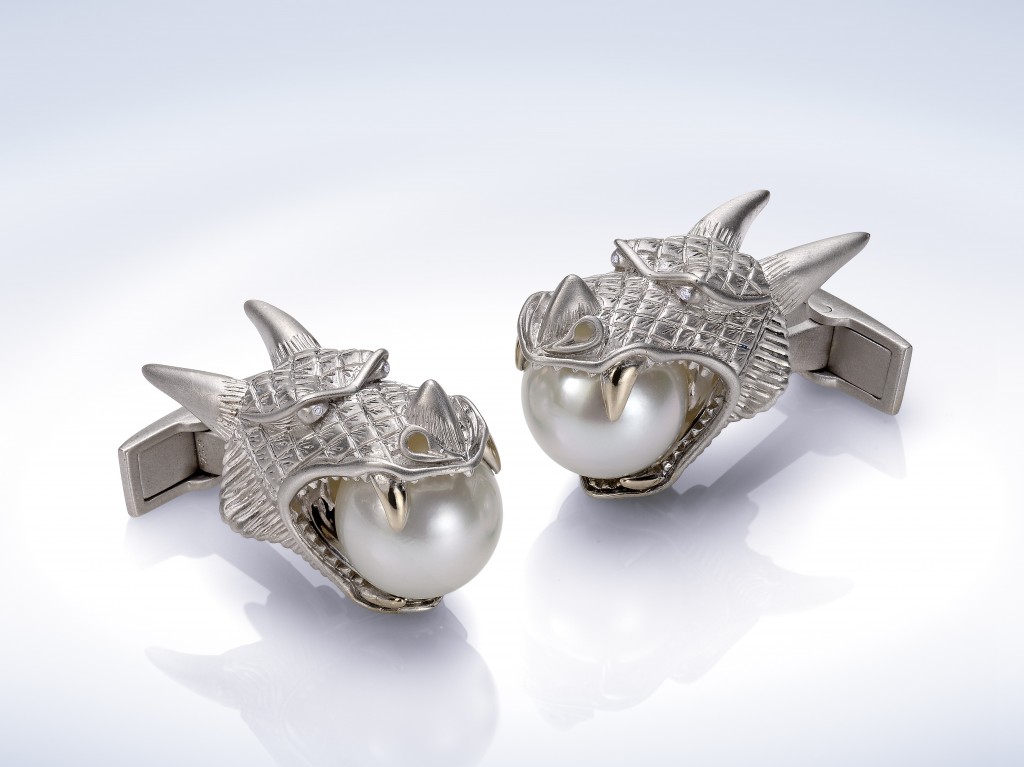 I told Zang that I wanted to add the dragon design to my line, which I sometimes do with customer-requested designs. I decided to start my personal dragon designs with a ring. Rings are my favorite pieces to do because the wearer can easily admire what she’s wearing. You can’t ogle your earrings unless you’re looking in the mirror. Necklaces are a challenge too. Even long ones must be viewed upside down. But you can spend all day staring at your hands if you want.

Zang had asked for his cufflinks to be highly polished white gold with South Sea pearls.  I decided to do something different for my collection so that Zang’s custom-ordered design would retain its uniqueness. I made my ring in 18K yellow gold, which is the material I work with most frequently. I like its warm color, which seems even warmer when a matte finish is applied. I also think it makes the diamond eyes really pop. Nearly 25 grams of gold were used in this piece. A Troy ounce is just over 31 grams, so the ring is about .80 ounce.

Instead of a pearl, I had lapis lazuli cut into a round shape and engraved to look like a globe. The continents are outlined in yellow gold. My Empress Wu rules the world! 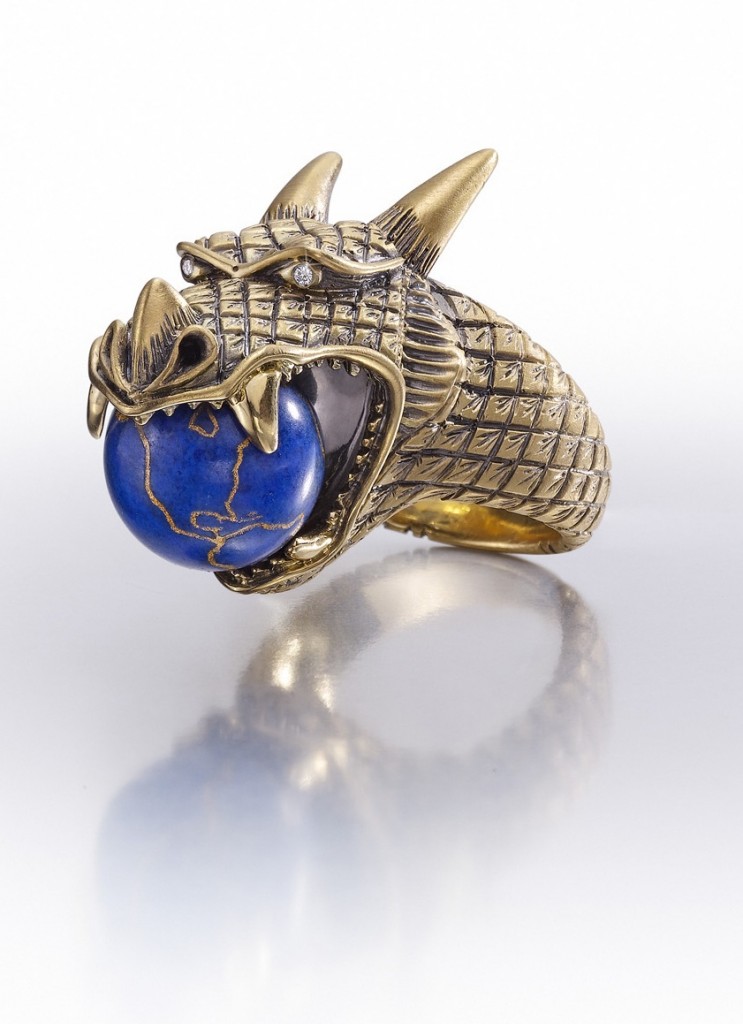 Of course, the globe turns! You should know me by now. I would never have a globe that didn’t turn. 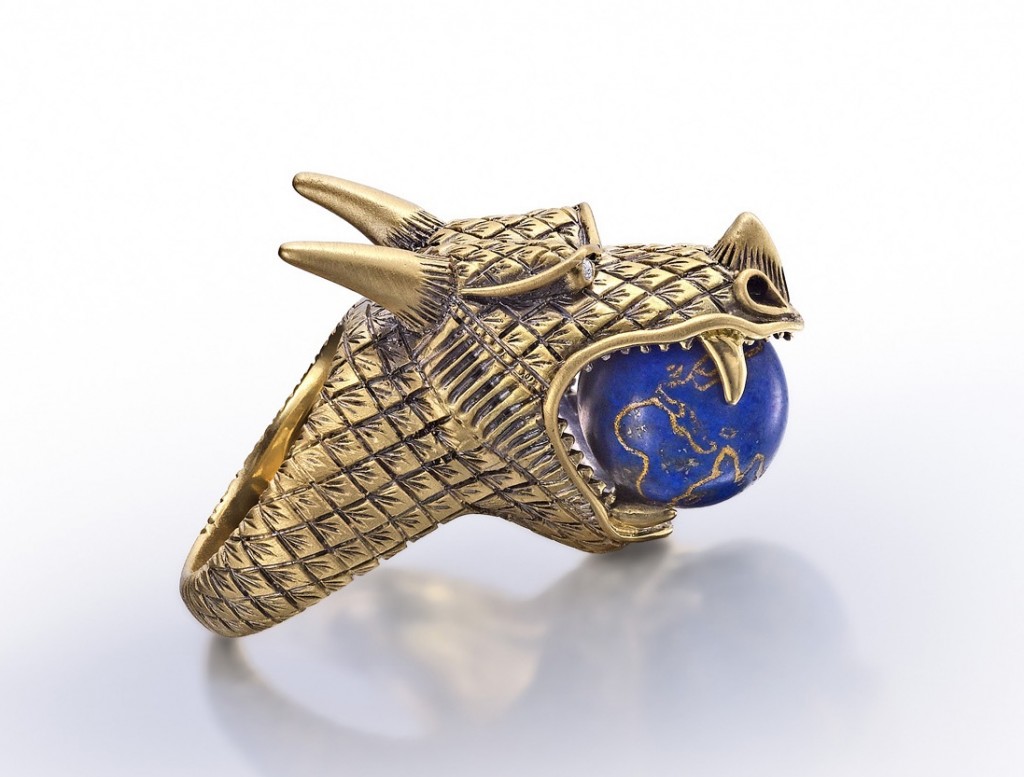 Side view of Empress Wu dragon ring. Photo by SquareMoose.

When the dragon was a mere wax model, I made sure that the horns wouldn’t pierce the wearer’s finger. A fierce look is good; a ring that draws real blood is bad. Comfort is important to me. Now that I’ve worn the finished ring myself, I can testify that the horns stay safely off my hand, no matter how I move my fingers.

More information about this wearable work of art is available on my website. The price available upon request to serious buyers. In other words, if you’re on a tight budget, this isn’t the piece for you. I always feel bad when someone emails me about a “price upon request” piece and it turns out they’re looking for something in the $100 range. I hate to disappoint. (If you’re looking for something in the $50 to $500 range, I have plenty for you here.)

If you still want to know about the dragon, contact me at wbjewelry at hotmail dot com. If you want something even more insane, wait till I finish the mechanical Wu tribute. Yep, it’s time to get back to that one.

The Huffington Post has posted a list of organizations that are aiding Japan in the wake of the devastating earthquake and tsunami. Remember, donating money to such organizations is much more effective than trying to send food and clothing to places where there might not be much access.

UPDATED TO ADD: I added Empress Wu dragon earrings to my collection in December 2011. And Vogue Paris featured the Empress Wu ring on its website in August 2012.