Forty years ago today, Beatles manager Brian Epstein died of a drug overdose. There would have been no Beatlemania without Brian. He did everything from booking their first big gigs (including the Ed Sullivan show) to designing the matching suits and instituting the coordinated bow. This Washington Post story (site requires registration) claims “everyone” has forgotten Brian, but while there may be no plaques to him in Liverpool, every real Beatles fan knows who he is. If you want to help Brian get into the Rock and Roll Hall of Fame, click here. His ghost-written autobiography is out of print, but this book sounds promising (as well as more truthful) and is available used for $3.10.

Brian was gay at a time when homosexuality wasn’t accepted. In a cosmopolitan city like London, gays had more freedom, but Liverpool was a dangerous place.

As the story goes, Brian had his eye on John Lennon, and there’s always been speculation about a trip the two of them took to Barcelona a day after John’s son Julian was born. Somewhere on teh Interweb, there is probably a lot of slashfic about that relationship. I prefer the movie The Hours and Times, which takes a look at what might have gone on in Spain. Liverpudlian Ian Hart plays John, a role he also played in Backbeat, the Stu Sutcliffe story. You might also know him as Professor Quirrell in Harry Potter and the Sorcerer’s Stone.

Speaking of John Lennon, I was happy to see his songs and videos hit iTunes earlier this month. My two favorites are “Mother” (very primal scream-y) and “God” (which is like “Imagine” would be if “Imagine” had any real edge). “Working Class Hero” is also great, but I actually prefer Marianne Faithful‘s version. By the way, when Lennon was murdered, there were a quite a few obituaries that used “The Dream Is Over” in the headline. That’s a lyric from “God.” 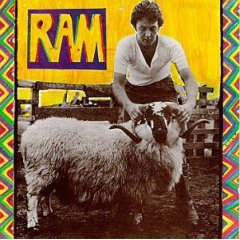 Paul McCartney’s music appeared on iTunes back in May. “Nineteen Hundred and Eighty Five” was always one of my McCartney favorites.

Her white mini, knee socks and hat are to die for, and I like that he’s got the matching white jacket. I think they look terribly chic. They often worked matching outfits in a cool way. And yes, I got a floppy white hat because of this photo!
Yoko still rocks the major cleavage. I’ve seen her a couple of times in person but have always been too terrified to say anything to her. So I’ll say it now: Hi Yoko!

Now, I will bring this long post back to another favorite ’60s figure … Ossie Clark! Supposedly, he picked up Brian Epstein in a gay bar and was given Beatles tickets as a gift. That’s one way to meet the Beatles!

UPDATED TO ADD: I knew there was one more Beatles-y thing that I wanted to mention. Pattie Boyd (ex-wife of both George Harrison and Eric Clapton, subject of “Layla” and “Wonderful Tonight”) has written an autobiography. Check it out!