Ossie Clark was the fashion king of ’60s and ’70s London, dressing Twiggy, Bianca and Mick Jagger, Marianne Faithful, Talitha Getty and Patti Boyd, to name just a few of the Beautiful People. I love his floaty chiffon and moss crepe dresses with ’30s references, plunging necklines and sashes that tie under the bust. 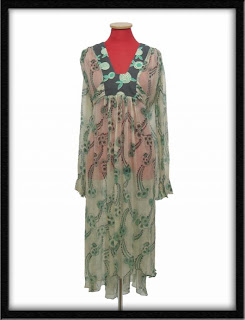 Above, my own Ossie Clark chiffon dress

The elaborate prints created by Ossie’s wife, textile designer Celia Birtwell, enhanced his designs. For a time, Ossie and Celia were quite the happening couple; David Hockney’s portrait of them and their cat, Percy, now hangs at the Tate. The couple divorced in 1974, and Ossie — who led a complicated life — was murdered by a boyfriend of his in 1996. 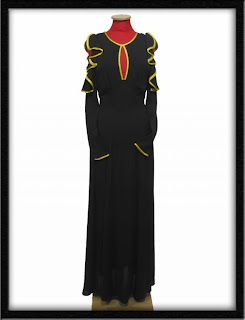 Another one of my Ossie dresses

If you’re not an Ossie fan, you might recognize Celia’s name anyway, thanks to her capsule collection for Topshop, worn memorably by Kate Moss last year. If you missed out then, you have a shot again as more designs are rolling out right now. I’ve always had mixed feelings about this Topshop project. There’s no doubt that Celia is very talented in her own right. There’s also no question that the collaboration allows Topshop to create an inexpensive “Ossie” line with without the fuss of using â€“and paying for — Ossie’s name. Was that the intention? Who knows. But much of the buzz around Celia’s Topshop project came from fashion editors tripping on the evocation of Ossie. And just take a look at eBay, where the Topshop offerings are routinely described as “Celia Birtwell/Ossie Clark.” 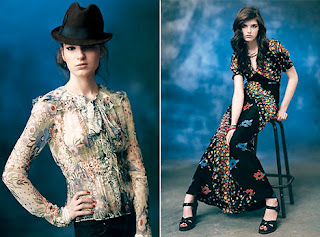 Above right, Celia’s maxi dress for Topshop. Below, the original 1971 Ossie dress via the Victoria and Albert Museum. They look identical, don’t they?

As I said, I have mixed feelings about this. I am an admitted Ossie obsessive; Ossie and Stephen Sprouse are the only designers I’m truly dedicated to collecting. Also, I know a person who has a financial interest in the Ossie Clark label and I would have loved to help him revive the the line — if only I could have scrounged up the necessary megabucks. On the other hand, Celia should certainly be able to do her own work and make a living. Considering how horribly Ossie treated her, by his own admission, maybe she is owed this by him. A little posthumous payback, if you will. Plus, as you can see from the dress above, he copied ’30s and ’40s designs so assiduously himself that he really couldn’t point any ghostly fingers. 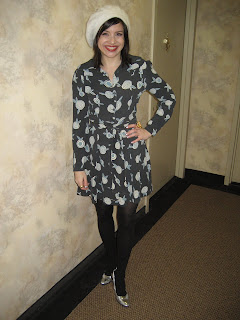 Above, me in February 2007 in my own Ossie, in the same old hallway that has to serve as our “studio.”

At least the Topshop clothes are an open homage to Ossie, from a genuine Ossie collaborator. I prefer that to other designers who buy up the vintage dresses, cut them apart to make a pattern for themselves, and sew their own label on the result. I’m not going to post the many pictures I have of Ossie clones. We all copy, there’s nothing new under the sun, let he who is without sin cast the first stone, etc. I just wish designers wouldn’t hog or hurt the originals. 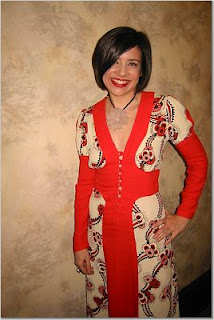 Me in an Ossie in February 2006. This one made it into the New York Times! I was so excited I swore I would never want anything again in life. That didn’t really work out.

I’ll stop rambling now. (Please note, I’m not ranting, only rambling! Jennine, back me up on this.) If you want some Celia from Topshop, I hope you’re not too late. There’s some on the Topshop site as I write this. (I keep getting an error when I try to link to the direct page. Sorry!) Also the Daily Mail says some more limited edition designs will hit stores on September 9. Mark your calendars. 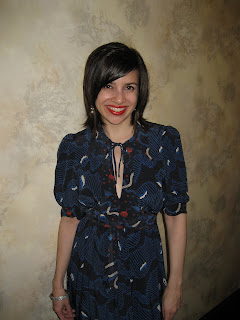 I’m particularly fond of this dress. The keyhole neckline is an Ossie signature. Unfortunately, I was very sick the day this photo was taken, so I’m not doing the dress justice. I also failed to get the beautiful hemline in the photo.

If you want to look at some vintage Ossies, try the V&A site. A great book is also available on Amazon. I’d recommend skipping his diaries, which are agonizing to read. C20 Vintage in England has a great collection of Ossies for sale; good for window-shoppers too. And my dear friend, the lovable and heavily tattooed Evan Ross, always has some Ossies at his store, Frock NYC. 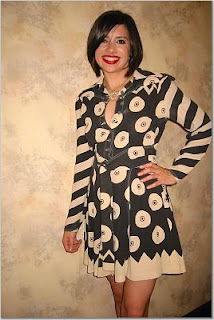 One more Ossie for luck. This is the same style dress as the one I’m wearing in the photo with a white beret, higher up in this post.
You might also like
Meet Marilyn and, Maybe, Me
What Wendy Wore: WJA Awards of Excellence
Great Minds Think Alike ... About '80s Sunglasses
Previous Post: « Public Service Announcement: Skinny Gold Jeans
Next Post: Hogan’s Misguided Chrissie Hynde Tribute »